We had this golf trip planned for three years, and then something came up that nearly caused me to not be able to go. My original flights to Ireland were scheduled on Friday, June 10. The Friday before, June 3, we were told that The Procedure would be scheduled for Friday the 10th, so I obviously couldn't make my June 10th flight early that morning. I bought tickets to go early on Sunday morning. I'd miss a round of golf on Sunday, but meet up with the boys and continue the rest of the trip as planned.

Then, the Wednesday before, the nurse informed us that the doctors at the hospital had changed schedules and we wouldn't be able to have The Procedure until Saturday. You see, this particular medical procedure is the only one that a doctor in Spain can refuse to perform on a patient; it's legal, but not all doctors will do it. This pretty much destroyed my chance of going to Ireland on Sunday, since Marga would need my emotional support all Saturday night and Sunday. On Wednesday afternoon, I wrote to my friends and told them I wouldn't be able to make it to Ireland. I was so devastated that I immediately broke into a fever and cold sweats, which put me in bed two days straight. The Procedure went quite well, despite a noticeable lack of anesthesia, and Marga started talking about me actually making my Sunday morning flight. We had to wait until 10:30 PM on Saturday night to have another ultrasound to verify that everything was out. The doctor determined that everything looked good, but that Marga had to spend the night in the hospital, a hospital that was 90 minutes away from the airport where my flight left at 8:30 AM the following morning. At 11:00 PM, I decided I would drive home, despite my fever-induced shivering, pack, and then drive early in the morning to the airport where I would rendezvous with my father-in-law and sister-in-law to give them my car. When I called to advise them of this plan, they had a better one. My sister-in-law and her aunt would leave immediately and drive the two hours to the hospital where my sister-in-law would spend the night, and her aunt would take me home to pack, sleep an hour, and then she'd take me to the airport. I was happy to not have to drive that night.

I got home around 2:45 AM and began packing. I hadn't packed anything yet because I had been convinced that I wasn't going at all. By 4:00 AM, I was packed and in bed, and my alarm went off at 5:30 AM to get me up and showered and headed to the airport. The 60 minute flight from Bilbao to Madrid was fairly uneventful, as were the four hours of layover in Madrid, where I heard that Marga had been released from the hospital and was on her way home to rest. My fever came back, however, for the longer flight to London Heathrow, and I vaguely recall the two women next to me looking at me shivering in my half sleep and saying "Qué pobre!" In London I pulled out a stash of quid I've had since my last golf trip to Scotland and had a celebratory beer. Soon my gate for my flight to Shannon was announced and off I went. I slept most of the way there.

Upon arriving in Shannon, I wandered out to the street and my friends were nowhere to be found. They had gotten lost on the way back to the airport and finally picked me up about an hour after my arrival. An hour and a half later, with my iPhone navigating, we made it back to the Cashen Course House B&B in Ballybunion, where they had played the Cashen Course two days in a row, and where we would all play Ballybunion Old, one of the most famous golf courses in Ireland, the following day. 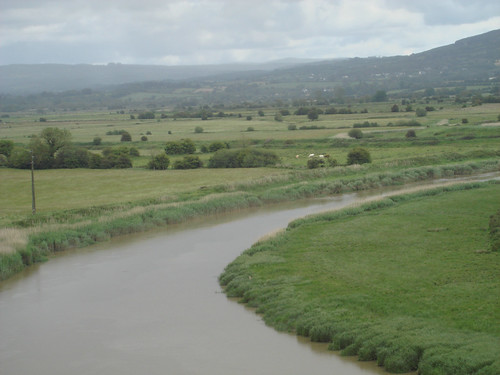 I had made it to Ireland!