To date, we haven't put much energy into explaining anything to Nora about her impending sisterhood. There are still plenty of months to go, and she hasn't seemed to notice her mother's bulging abdomen yet. My blogrollmate, Andrea, has recommended a book called I'm A Big Sister for when the time comes. To be honest, we haven't really thought Nora had the mental capacity to understand that a baby was on the way...until yesterday. Yesterday, when her mother went to pick her up at daycare, Nora's favorite daycare worker, Nela, began talking to Nora about it. As told to me, the conversation went something like this:

Nela: "Nora, did you know there's a baby coming?"

Nela: "And where is that baby now?"

Neither my wife nor I, nor Nela, nor Nora's grandparents have told her that. She got the information from some other source. It had to have been either another daycare worker, or perhaps an older child. One of the best parts of parenting is when your child exceeds your expectations.

I'll leave you with two photographs I took today. 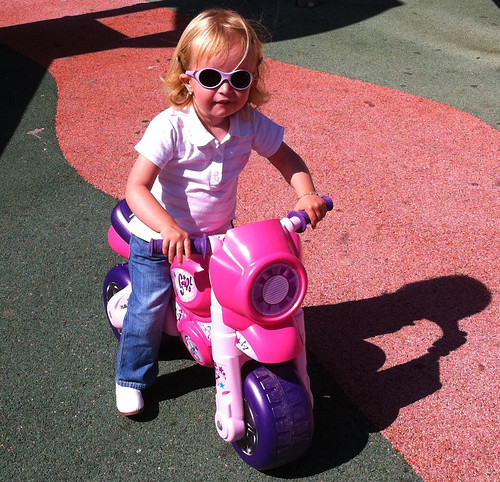 Grand theft motorcycle in the playground. She looks good on it. Nora has a motorcycle like this, but it's not pink, and it was a hand-me-down gift from a friend of ours. She hasn't yet been able to touch the ground while on it, but today she did pretty well with this one she bummed off a fellow playground patron. 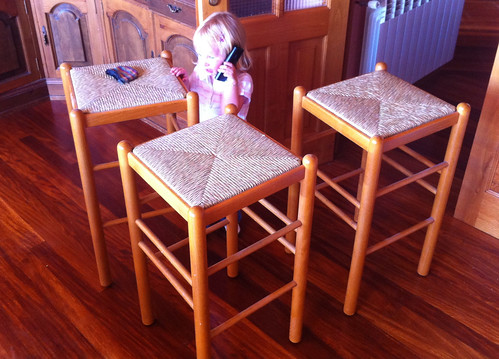 While I was cooking lunch, I realized that all three benches were no longer in the kitchen where they normally are. I found Nora in the living room organizing them into an informal fort, another game I would've thought she's too young for. Here she is recounting her furniture migration campaign to her abuela.