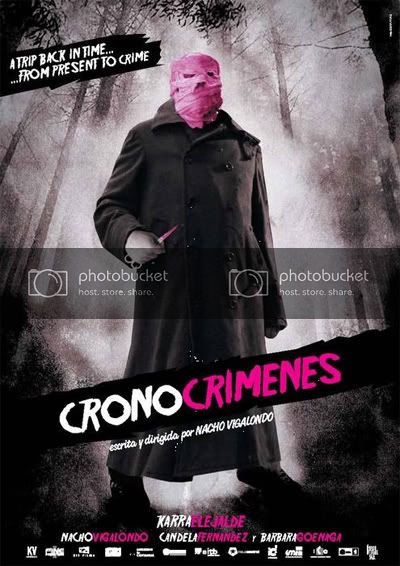 Several weeks ago, I got an email from my Uncle Neil recommending a movie to me. He had previously recommended Primer to me, which I loved and watched several times to catch all the intricacies of the time travel, so I had high expectations. Timecrimes is a low budget Spanish film shot here in Cantabria, my region of Spain. If you look at any of the movie posters or trailer (I recommend not watching the spoiler-laden trailer), you might get the idea that it's a horror flick with a bloody-bandage-wearing scissor-wielding homicidal maniac, but it's really not at all. It's more about an average man trying to outsmart himself.

Héctor is middle-aged man who moves out to the country with his wife. For some reason – perhaps he's a birdwatcher – he likes to sit on a lawn chair in his yard looking into the forest with a pair of binoculars. He sees something intriguing and goes off into the woods to investigate. He is attacked by a strange man wearing a bandage on his head and flees for his life, at which point he stumbles upon a remote lab where an irresponsible lab tech is testing a time machine.

The rest of the movie involves him interacting with his past self, both initiating the intriguing event that brought his past self into the forest in the first place and attacking his other self to scare him into the time machine lab. Things go wrong and he has to time travel again to fix the problems, manipulating both his other selves to fix his problems.

Writing and shooting time travel movies is exceedingly complicated because of the paradoxes involved and the difficulty of facilitating the audience's ability to follow which instance of the character they are seeing. It's a little like when a story takes place in multiple universes, e.g. Sliding Doors or Fringe, where characters need scars or hair style changes to keep the audience on the right page. The usage of a full head-covering bandage was a clever device to both make it easy to tell Héctor 1 from Héctor 2, and also to keep Héctor unaware that he's interacting with a future version of himself.

On the whole, the movie was very well done and very entertaining. I was kept on the edge of my seat for the whole 92 minutes. A Hollywood remake is currently in development by DreamWorks, being re-written by Steve Zaillian, who won an Oscar for his screenplay for a little known movie called Schindler's List. It's due out in 2012 and could be quite good.

Thanks, Uncle Neil, for the great recommendation.