Today we saw the first episode of the second season of Pregnancy. It was Marga's twelve-week ultrasound. There was an eerie sense of déjí  vu in the same corner of the hospital with the same nurses and same 12-week-ultrasound doctor as the last time. Just like last time, I was blown away by two distinct facets of our visit.

They can see inside my wife!

Although I have some vague understanding of the physics behind sonography, it is still completely amazing that we can "see" something in complete darkness without the use of electromagnetic waves (I mean, particles). The computational trickery to emit a certain frequency, hear the echo, "focus" the frequency to a certain depth, and construct an image from it is absolutely amazing.

It's also interesting how the human brain can more or less understand the three dimensional shape it's seeing, even though the ultrasound monitor is only giving you a slim two dimensional sliver of the image. It kind of reminded me of Flatland. The still images just don't do justice to the motion-inducing 3D perception you get from looking at the monitor.

There's a little human in there!

Academically, I have the whole mammalian reproduction thing pretty well grokked. I know where babies come from. On the other hand, HOLY CRAP THERE'S A LITTLE TINY HUMAN BEING LIVING INSIDE MY WIFE!! Until you've actually seen a modern day obstetric ultrasound performed, you can't really understand how weird it is to have them stick a wand into one human and find another human inside. It's very Matryoshka. I think I could attend a thousand ultrasounds and never get over how utterly (uterally?) amazing it is that human beings can grow and live inside one another. As a Y-chromosome carrier, I'm both relieved and disappointed that I will never experience sharing my body with anyone.

Without further ado, I present the internet debut of my second child, currently known as Offspring0002. 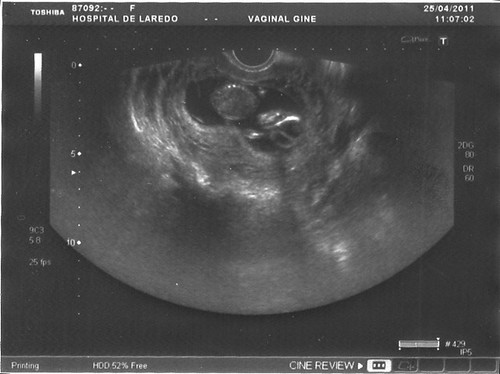 Ultrasound images are notoriously "Rorschachy", but I think this is a profile shot with the head on the right looking up, and the body on the left. Except that the dotted line look like vertebrae, so perhaps I'm wrong.

This is a face-on shot, which looks eerily like the pop-culture alien face, especially when rotated.

The important news from the doctor is that A) there's only one of them (WHEW!!), and B) it looks perfectly healthy. It'll still be another two months until we know Offspring0002's sex. Until then, we'll just have to wait.