Over the past several weeks, as a project for his own personal blog, a colleague of mine, Cole Watts, has been interviewing me about my blogging over email. It was a fun experience, as I've never been interviewed as if I knew something about anything, well, almost never. I suspect many of my readers might be wondering these exact questions about me, but perhaps not. Here, reproduced with permission, in its entirety, is Cole Watts' interview of Erik Rasmussen, blogging expert. 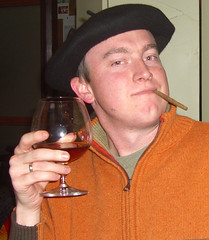 Most of us daydream about traveling but many of us will often not leave the United States. I\'ve recently had the opportunity to be a coworker of Erik Rasmussen, who took the idea of traveling and ran with it. Erik currently resides in Spain and is known to some as an American in Spain.

CW: According to your blog â€œAn American in Spain,â€ you\'ve been blogging since roughly 2006. During those early days, did you ever imagine that you would be doing this five years later? What was your early inspiration that told you I\'m going to do this?

I\'ve been blogging in one form or another since the 20th century. When I went on an internship abroad program to Denmark in 1999, I began keeping a journal of my adventures, which I would send weekly to my parents as an alternative to sending emails about how I was doing. With my permission, my father began posting these to the internet at his place of work, and by the time my six month stay was over, I had quite a weekly readership. When I moved to England in 2001, I used my domain and a server I had access to to post photos and brief stories about various trips I took. In 2005, I began to notice websites called â€œblogsâ€ and realized that the idea fit my personal publishing habits very well. I used a Mac app called iBlog for a year before I grew to hate it. I switched to Apple\'s iWeb for a month, but quickly moved to WordPress, and I\'ve been very, very happy with WordPress as a blogging platform ever since.

So I guess the answer to your question is that I can\'t remember ever NOT â€œdoing thisâ€. Sharing my experiences with my family and friends – and most importantly, with my future self – just feels so natural to me now. I\'d surely miss if I had to stop.

CW: You mention blogging has basically become a natural extension of your life and anyone whose visiting your blog will notice that you hardly go three days in between posts, but how do you decide what is â€œblog worthyâ€ or not? Is it just something that strikes you at the moment or do you have a set schedule/cycle when it comes to writing and posting?

Most of the times when I hit â€œpublishâ€, I have absolutely no idea what the following post will be about. Sometimes a day goes by and I\'m convinced that there\'s just nothing else to blog about, but then something always happens. Something someone says gets me thinking, or my kid does something adorable, or someone\'s behavior nudges me towards a rant, or I happen to take a pretty photograph. There\'s always something.

Part of what enables me to be so prolific is that I have very little rules set for the kind of content that is â€œblog worthyâ€. I guess my only rule is that I should be able to write at least a paragraph about the topic for it to warrant a post rather than just a Twitter/Tumblr/Facebook status. Sometimes I envy bloggers with a themed blog, about just about politics or cooking or programming or parenting or photos or travel, but then I realize how hard it would be for me to blog only about one topic and I\'m grateful for my lack of structure. No set schedule and no set topics.

CW: Having a blog often means that we often open ourselves to the world, both good and bad. I\'m curious, especially for someone whose blogged as long as you have and who seems to blog about anything and everything, have you ever had an issue with a troll or has anyone gotten angry over anything you\'ve said. How do you handle issues issues like this and/or do you have plans set up if anything like this does ever happen?

The only person that has ever let me know that they were offended by something I wrote is my wife, and in those circumstances (there is no one I would less like to offend), I have edited my post to rectify the situation. Now, if I think she might find something offensive or too personal, I will have her read a draft before posting. Oh, and I also have a cousin that gets really incensed when anything about him or his family is put online, so I\'ve had to censor him out of a few posts.

Occasionally there have been commenters who have been looking for an argument (example), and I enjoy a good rhetorical sword fight every now and then. I particularly like it when my fellow readers pick up a sword and battle with me. I try not to be too offensive, but I also will call a social norm stupid when I think that it is and feel that I have arguments to back my case.

CW: I also have to ask about your tumblr blog and social media in general. How has Twitter, Facebook, and the various other social media platforms affected your traffic and your blogging philosophy. Personally, I believe that social media is the ultimate delivery platform for blogs, links and content in general, but I\'m interested in hearing your take on how social media as you\'ve definitely been involved in this longer than I have.

I more or less answered this question in my post cleverly entitled Social Knot Working. Twitter, Facebook, and Tumblr are great, but it\'s frustrating that there are so many social networks one feels obliged to participate in. Facebook has more users, but is less open to non-users (those two are causally linked). Twitter is open to everyone, but not used by many people. Tumblr is great for very short link and photo sharing, but doesn\'t have built-in comments. Each service has its pros and cons and I can never decide which is my favorite.

As for how social media has affected my traffic, I\'d really have to say that it hasn\'t much. I think most of my traffic comes from RSS subscribers and people that aren\'t even savvy enough to use RSS and just visit my blog via a bookmark. I\'ve seen my posts get comments a little sooner after publishing because I have Feedburner set up to tweet my posts as they are published, but that\'s about it.

Oh, and I did get dugg once. That was particularly exciting because it crippled one of my employer\'s internet pipes for about a day.

CW: Okay, Erik one more question and I\'ll let you go. What advice can you offer to fellow bloggers? Are there any tips or tools that you recommend that a blogger should know about or use.

Hmm.. Well, it depends on the objectives of the blogger. If you want people that you don\'t already know to read your blog, then it\'s important to be generally interesting. Photos of your friends and kids are okay, but the way people will find you is by providing some useful information or opinions about a topic that someone might be searching for. Another good way is to make insightful, funny, and interesting comments on others\' blogs. One of the most rewarding results I\'ve had from blogging is making friends with some fascinating people all over the world, most of whom I\'ve never met.

The trick to maintaining readers\' and search engines\' interest in you is to provide regular content. Once a month isn\'t enough, once a week is better, and several times a week is even better.

As far as technology goes, I can\'t praise WordPress enough. I haven\'t used many of its competitors, but as a reader, I have a clear preference for WordPress, and, as a blogger, I\'ve never wanted a feature that WordPress didn\'t have but another blogging platform did. I highly recommend it.