Domestic Appliances in the US and Europe

My blogrollmate, Simon, shared this article with me today, by a US citizen who has lived in Europe for a decade, about the superiority of American domestic appliances. I must say that, after having spent a decade myself living in four houses and a dormitory in Europe, I agree completely.

Allow me to address my experiences with a variety of appliances.

Like the kitchens and houses they are used in, American refrigerators are considerably larger than their chilling European counterparts. What most annoys me about European refrigerator design is the complete disinterest in making ice. Here in Europe, I'm stuck with the old refill-the-ice-tray methods of the refrigerators of my childhood. The last two decades of innovative American ice automation technology is nowhere to be found on this side of the pond. There's just no demand for it. Europeans like their beverages warm.

The only thing superior about European refrigerators is the average quality of beer they keep.

Dishwashing machines are relatively rare in Europe. My current house is the first one I've lived in with a dishwasher, none of my Spanish family members have dishwashers, nor do their houses have a place for a dishwasher, since the spot in the kitchen where any American would clearly assume is for the dishwasher, is always where the clothes washing machine goes. I've certainly never heard of a washing machine in an American kitchen; in America we have special laundry rooms for the washer and dryer, which I'll get to in a minute.

Our dishwasher has four different places you can set the dial: A, B, C, and D. So to do a normal load, of course, you have to set it to B. When it gets to D, it's done. That's all the people that sold us the house knew, and that's all I know. The door to the little compartment inside the door where you put the detergent is broken in the open position, so we just throw in the little block of soap anywhere into the dishwasher. Despite all these faults, it does an excellent job of cleaning dishes. 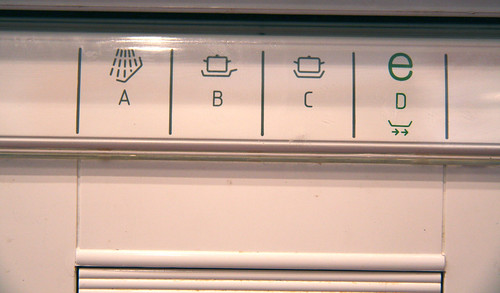 What on planet Europe could those symbols mean? A does something with water (or is it air?), B does the same thing as C, but with a tail, and D (or is it e?) moves something somewhere.

There are almost no clothes dryers in Spain, and not many across Europe, and I can tell you why. It's what my wife says every time I suggest we use it: "Why pay for the electricity to dry the clothes when you can just hang them out for a few hours and spend nothing?" To be honest, I don't have a compelling answer to that question. There are a few reasons, and I'm reminded of them every time I visit The Motherland. Clothes that are tumble dried are softer and need considerably less ironing than clothes that are line dried.

The whole point is moot, however, since our dryer has never worked in the entire time we've had the house. The previous owner claimed to have never used it, so I suspect it may never have worked. It does a great job in getting the wet clothes really, really hot, but does nothing with the water. It annoys the crap out of me to have so much valuable kitchen volume wasted on a big functionless appliance.

All my experience with washing machines in Europe has involved having to run each load twice. You put in the clothes, put the powder detergent in a little slide out tray, turn it to the desired setting, and press start. If you don't catch it at just the right moment in its rinse cycle to put in the liquid softener, then you have to turn it off, turn the knob back to its rinse cycle, put in the softener, and start it again. In theory there's another compartment in the tray where you can put in the softener at the same time as the original detergent, but on the three washing machines I've had, that has never, ever, ever worked.

You need the Rosetta Stone to decipher the washing machine hieroglyphs.

Actually, I think I know what these are. For whites, we set it to 1, and it goes longer and with hotter water (the 90, 60, 40 must be liters, where you can set it to 2 or 3 if you have a smaller load?) before rinsing (step 4), spinning (step 5) and stopping. For coloreds, we set it to 6, and it goes through a shorter cycle with cold water and stops after 10. I assume 11 and 12 are for some super short cycle, but we never use that.

I suspect most Europeans have never even heard of a garbage disposal, a blender that sits in the drain of your sink to chop up organic waste so it can fit down the drainage pipe. When I first got to Europe, I thought, "What do you mean I can't put potato peels down the drain?" As in most things (but not hybrid cars, strangely), the Europeans are much more environmentally friendly than the Americans. This is not because Europeans are fundamentally better or smarter people, but that they have had millennia to develop a culture more suited to close-quarters living, which by necessity needs to keep the environment clean, and the American way of life is all about cheap wide open space.

Spain is just now, in 2011, starting to get a few channels broadcast in HD, but they are pay channels that I can't see. And my cable provider doesn't seem to be making any effort to give me more pixels. It's unclear to me what the reason for this technological lag is. There must be some political issues holding back the broadcasters, because it's certainly not that the Spaniards especially want to watch their fíºtbol in low definition.