A Step-By-Step Guide to Booting Hackintosh to Striped RAID

Almost two years ago, I bought a Hackintosh: a normal Intel PC that can be converted to run Mac OS X, resulting in an $800 computer with the power of a $2400 Mac Pro. I can't remember the last time I've been so pleased with a computer purchase, especially two years later. One important decision I made was to go with a Solid State Drive for the boot drive. The biggest bottleneck in common use of most modern personal computers is the hard drive access; processors are fast, memory is fast, but hard drives are slow. As if using an SSD wasn't fast enough, I bought two of them and used RAID striping, a technique which splits the data evenly across both drives, so when I want to load a file, half of the file is read from one disk and half is read from another in parallel. As you might imagine, it's pretty speedy. The computer I bought was the recommended setup that Lifehacker guaranteed would work as a Hackintosh, with a few small variations. Back when I originally did the hacking to get Mac OS X to run on it, there was no known way to boot to a RAID array, so I had to boot to a USB flash drive, and then select my RAID disk. This was especially annoying since I've gone all wireless, because I'd have to keep a wired keyboard around to plug in for navigating the boot menu.

This past week, however, through a sequence of turning off my computer mid-boot several times, I managed to break its ability to boot to the USB flash drive, thus bricking my entire computer. In the two years since my original setup, the Hackintosh community has been hard at work improving and streamlining the boot and hacking process. This thing called MultiBeast has been invented and the Chameleon bootloader has grown a lot too.

Here are the steps I used, after going down many wrong paths, to finally get my Hackintosh working with Mac OS X 10.6.7. Step 3 is specific to my NVIDIA GeForce 9800 GTX+ 512 MB video card. 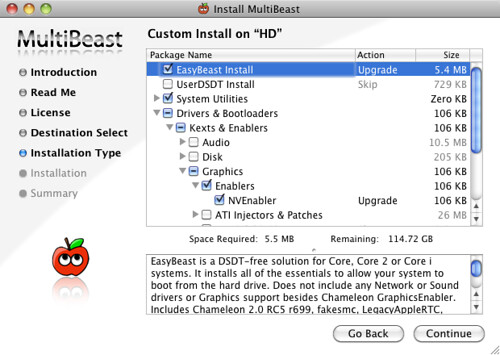 Step 3: Install the GFX String for your video card

If you're lucky, you may not need this step, but I could not get Snow Leopard to recognize my NVIDIA GeForce 9800 GTX+ 512 MB video card, leaving me at 1024x768 video resolution and no multi-monitor support. If you're having video card problems without doing this step, come back and try it.

Note: When I did the original iBoot + MultiBeast method, which includes immediately installing the 10.6.7 Combo Update, only some of my video card's capabilities were recognized after this step. It's important to do this step before you upgrade to the latest version of Snow Leopard.

I have broken up the hex string here for formatting purposes, but you should make sure that you have no spaces between the tags. 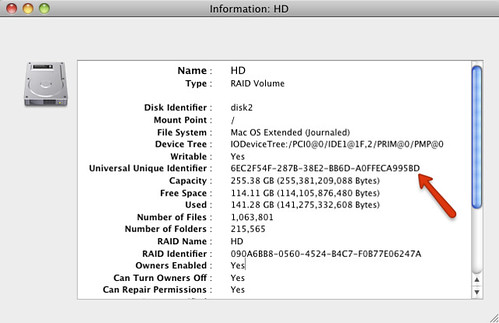 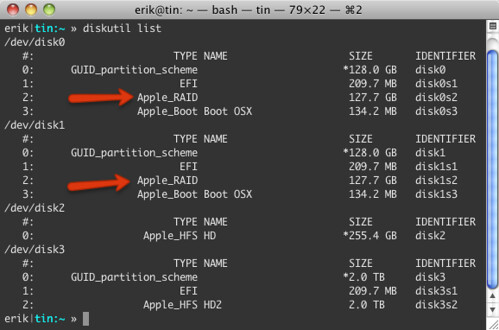 9. Remove your iBoot CD. 10. Reboot, but hit DEL to enter BIOS. 11. Set your BIOS to boot to one of your RAID drives first. 12. Press F10 to save your BIOS settings and reboot. It should boot properly to Snow Leopard on your RAID drives, faster than you've ever seen Mac OS X boot.

You can probably do this via Software Update, but I already had the 10.6.7 Combo Update downloaded from previous attempts, so I did that first.

I got most of my information from the following helpful guides.

This process involves a lot of trial and error and reading about others' trials and errors. My main motivation for writing this post was to give others yet another guide to try when others have not worked, and to record exactly what I did that worked while it's still fresh on my mind.