On Sunday we were visited by my lovely blogrollmate, Mother Theresa, and her beautiful family. They were visiting Santander for the weekend, and asked if they could stop by for a visit. I'm very glad they did. The last time we saw them was almost three years ago in Pamplona, their hometown, during the festival for which you have heard of their town, San Fermí­n. Incidentally, at that time, Nora was about a dozen cells big, considerably smaller than her fetal sibling is now. It seems an odd coincidence that we've only ever seen Theresa et. al. when Marga was pregnant. They arrived mid-morning, which in Spain is around 12:30. It had rained for most of the morning, but we decided to throw some umbrellas on the stroller and brave the elements. And it was a good thing we did, because it didn't rain at all and actually got quite sunny and warm. We walked around the maritime walk which is "what there is to do" in Colindres. After entering town again, we stopped at Cafe Limite for some wine, a non-alcoholic beer for Marga, and some soft drinks for Theresa's girls, whose blog names are Catgirl, Secret Agent Mimi, and Ultraviolet, fifteen, thirteen, and eleven years old respectively. We later stopped at La Comarca, another bar, for another round of drinks, before heading home.

Once home, I turned the oven on for my pre-prepared Erik's Hamburger Pie dish, which might require a recipe post some time. As usual, when you have guests over and are trying to impress, the pie turned to mush and ended up more like soup. But it was damn tasty soup! When your guest asks for seconds and the recipe, you have to be fairly pleased as a chef.

The conversation was absolutely delightful. It was such a rare treat to be around five other people that shared our two languages, and the conversation darted between languages without thought or planning. Seeing Theresa's daughters is a little like seeing into Nora's future. They are perfectly bilingual, but choose almost exclusively to speak in Spanish. I got a few "yes" and "no" responses out of Catgirl, almost nothing but smiles at my jokes out of Ultraviolet, and a few score English words out of SAM. But it was clear that they followed every word spoken. Theresa's husband, known as The Professor, was exceedingly interesting, complimentary, and engaging...positively delightful to talk to. 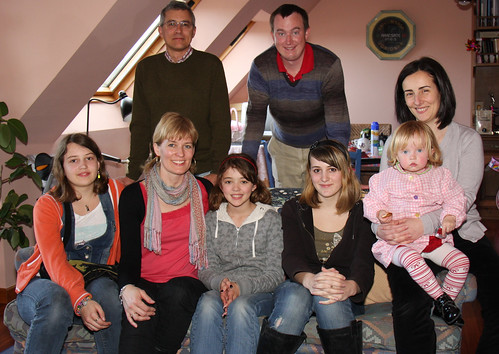 Have you ever seen eight more photogenic people? That was rhetorical.

At one point, I brought out Nora's iPad and the theory that "the iPad causes family tension because everyone fights over who gets to use it" was totally confirmed. The Professor, who is actually a professor, immediately realized that it was lighter than the paper equivalents of the PDFs he normally carries around. I showed off a few features, and then let the girls play with Gravilux, a game-ish app that is way more fun than it looks at first.

The other nice thing about having bilingual guests was that they could completely appreciate every word out of Nora's mouth. Nora was the center of attention for a fair amount of the time, but also managed to go off and play by herself for some of the lunch conversation, which was very nice. Of the girls, Catgirl did best with Nora because she made the most effort, but no one got much further than holding Nora's hand, except for Theresa, when they were departing, who got a kiss on the cheek from Nora, which made her feel deservedly special.

The worst thing about their visit was realizing that they live so far away (2.25 hours, according to Google) and that these wonderful visits can't be more frequent. It's fun having such engaging conversations, especially about parenting with experienced veterans, and especially in both languages, with the ability to switch fluidly from one to the other.