Carnival 2011 in Colindres - Angels and Demons

A few weeks ago, we received a letter from Nora's daycare that read something like this:

On Friday, March 4, we will celebrate Carnival and go on a parade around town with all the other daycares and schools. This year the children will be dressed up as demons (very appropriate) and the educators and parents and grandparents will be dressed up as little angels (which is what we are).

When I commented to the daycare boss how much I appreciated her sense of humor, she thanked me and said that she'd actually received one complaint from some schmuck about calling her daughter a demon. Jeez.

A few days ago, we'd been given Nora's demon tail to be sewed onto a pair of trousers, and been instructed that she wear the darkest clothes she has. Here-in lies the problem with celebrating Carnival in the northern hemisphere: it's bloody cold in February and early March! So either you wear your coat over your costume and no one can see your costume, or you are cold. One of the many things that was well done about the way our daycare organized things, was that the costumes were made of plastic and designed to be worn on the outside of your coat. Nora and I got up a little earlier than usual, had breakfast and headed to daycare, I with long underwear and white clothes, and Nora with her tail. Upon arriving, we found lots of kids and parents in various stages of costume. I dropped Nora off in the kids room and I went to the room where the adults were getting painted, winged, and haloed.

Once in costume, I began my official duties as The Official Daycare Photographer, snapping photos of all the kids. I was told to be sure that I got a shot of every single one. I did my best. At first it was easy to get good portrait shots of the kids because they were fascinated by my camera and would stare blankly at it the way children that haven't learned the "it's not polite to stare" social norm do. 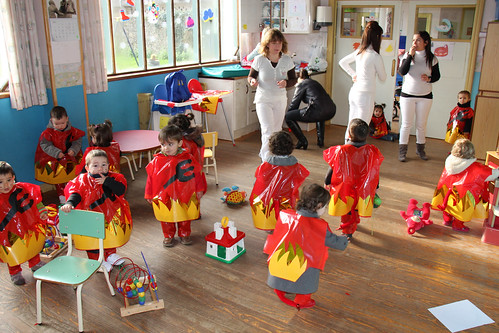 This gives a sense of the chaos of little demons. 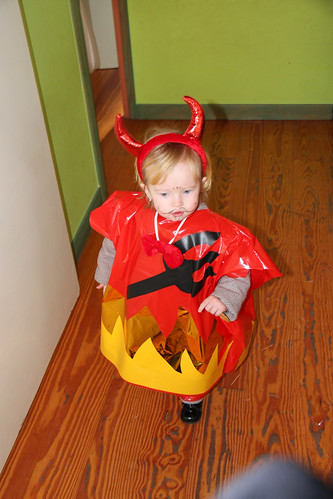 Eventually the costumed parents and kids were led outside. At these preschool daycare facilities, they only have kids between 6 months and 3 years old. The way it works, apparently, is that the three year olds are trusted to walk for the entire parade, and they are held together by a rope with handles on it. The two year olds are generally pushed in something, and the one year olds are in their individual strollers. This year, they had designed a wonderful little trailer for the two year olds to ride in. 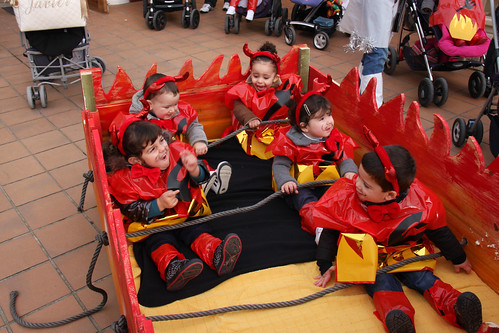 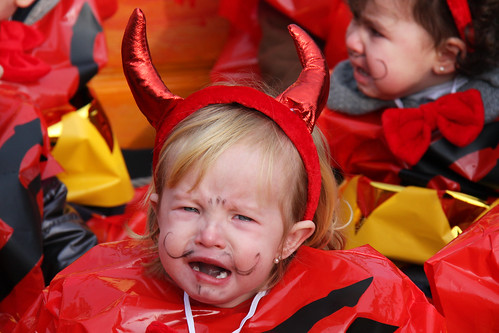 At first, Nora was not at all pleased to be placed in the trailer, but she soon got used to it and even enjoyed the ride. 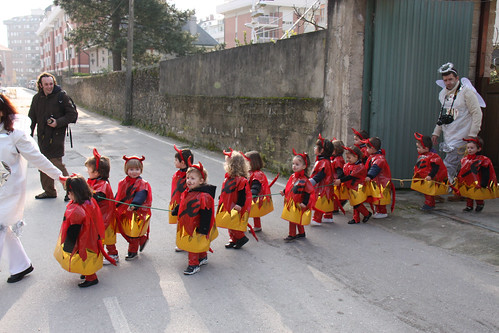 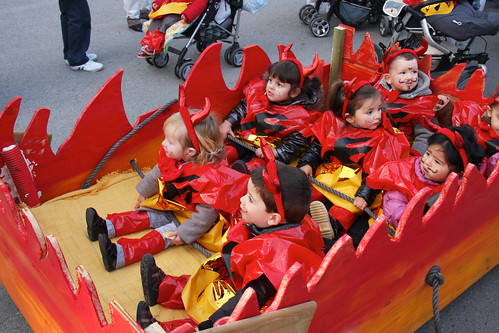 A trailer full of little demons.

Just like last year, we walked to another daycare and waited for the kids to come out of that one. Because our daycare boss, Adela, is so incredibly efficient, we always get there a little early, and the other daycare is always running a little late. The costume theme for the other daycare was this bizarre nondescript Persian Aladdin-esque look, no where near as imaginative, well-executed, or smile-inducing as our theme.

We then continued on to the town church square, where we waited for the kids from a local primary school to arrive. They were dressed as what I was brought up to call Native Americans. All the stereotypes were in play, with some seriously elaborate costumes. I was quite impressed. 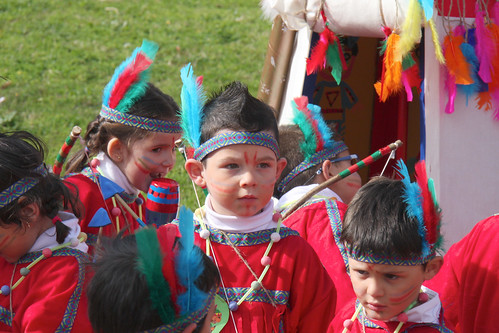 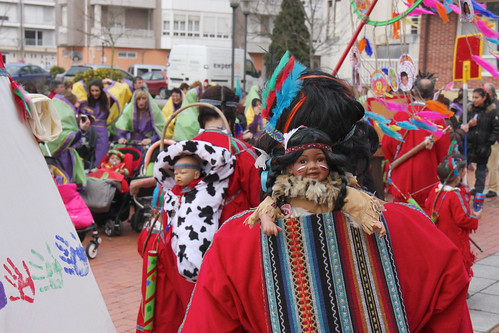 The teachers wore little infant dolls on their backs. Creepy. 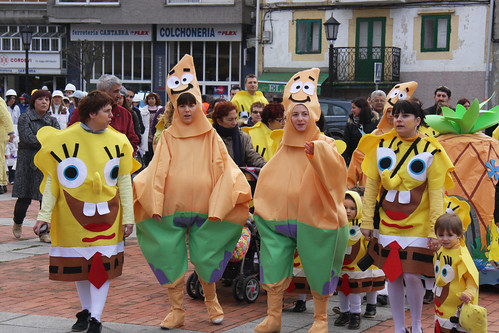 Another school must have let the kids vote, because they were all dressed up as Sponge Bob Square Pants. 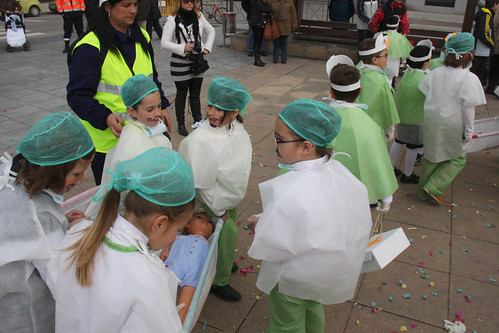 Yet another school of older children were dressed as doctors and were made to carry around dolls in stretchers. Bizarre. Hair nets, smocks and mustaches (because all doctors are men, don't you know?). It was a pretty lazy effort compared to our daycare. 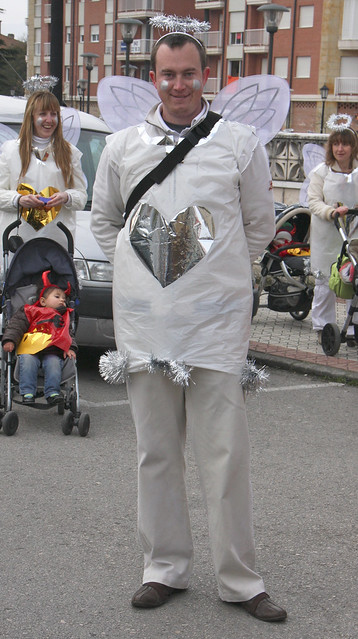 A woman I know from around town was kind enough to offer to take a photograph of me. Mighty angelic, don't you think? 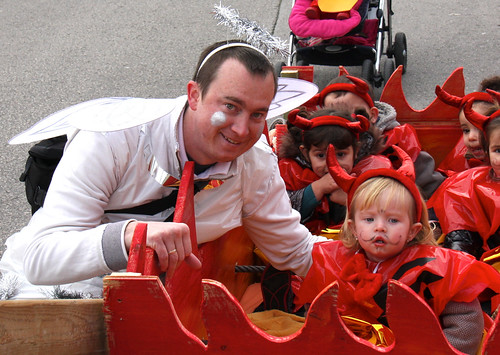 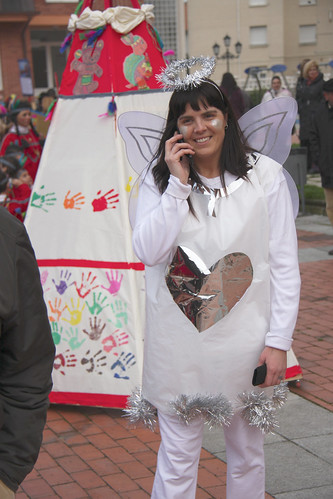 This is Adela, the daycare boss that organized us all. She said there were fifty kids and thirty parents that participated from our daycare. The tails, horns, wings, and halos were purchased, but the rest of the costumes were handmade by the daycare employees. It was very, very well done.

Once all the schools had merged, we all paraded about 200 meters to a central square in town and walked around its circumference a few times while the town's DJ, a guy that handles the microphone at all the local events, commented on our costumes and generally herded us around. There was music and dancing for a few minutes, and then it was time to head back to daycare. 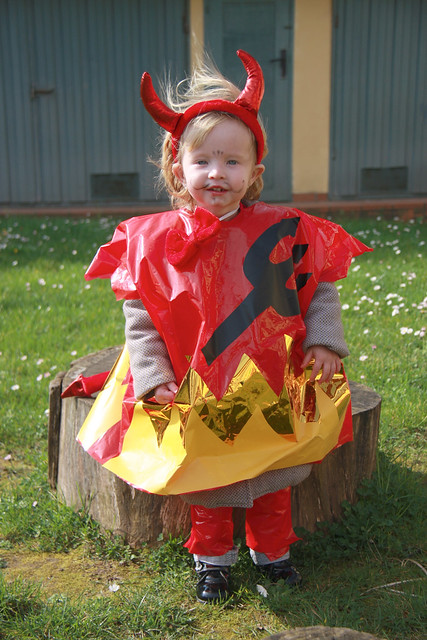 A costumed portrait of Nora back at the windy daycare yard. Probably a good idea to just draw on the pitchfork rather than actually arming the children with barbed tridents. 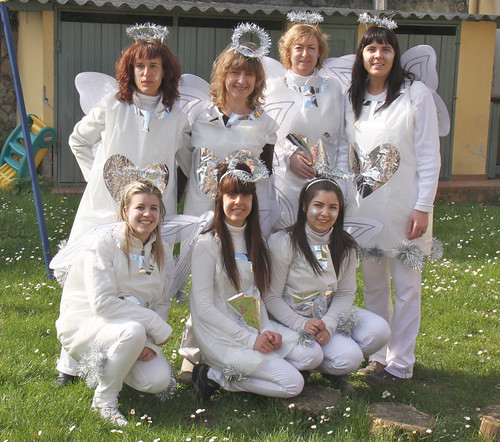 All the daycare workers: the angels that made it all possible. 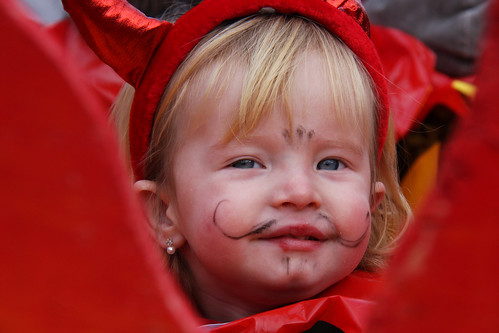 Back at home, Nora ate about three times her normal lunch portion and promptly zonked out; she'd had a full and exciting morning of fun.

I must admit to not enjoying last year's Carnival celebration that much, but I enjoyed this year's immensely and I'm looking forward to next year.

For now, though, I'm going to give up wearing costumes for Lent.

All 194 photos can be seen here in thumbnail or slideshow format.