Horquilla, pronounced "or-KEY-ya" is one of those Spanish words that, if I hadn't had a daughter, I could've lived my entire life in Spain without needing. A Google search brings up the Spanish Wikipedia page for the part of a bicycle known in English as "the fork". One of the related articles refers you to another meaning, in the realm of automobiles: "hairpin turn"...which eventually leads to to the primary usage of the word: a hairpin or bobby pin. Nora has traditionally been a really bad sport about letting anyone touch her hair, but the checkout lady at the grocery store, Ana, who sees her for five minutes every day, has slowly but surely built up a confidence with Nora. Yesterday, Ana asked me to bring in a hairpin the next day to see if she could put it on Nora. Already a mother of two, Ana knows a few tricks of her own and made sure to have a bobby pin to put on herself first, both to show it doesn't hurt and looks good, and to generate some envy. When asked if she wanted one too, Nora enthusiastically said "Sí­!" Although she tensed up for the final [snap!], Nora allowed her hair to be pinned.

Ana then carried Nora to a mirror to admire her hairdo. When asked, "Where are you pretty?", Nora would point to her hairpin. It was pretty cute. At home, she eventually took it off, and then demanded I put it back, which I didn't do to her liking, so we gave up. In the end, I had to hide it from her, which resulted in her walking around saying, "Tortilla, where are you?" 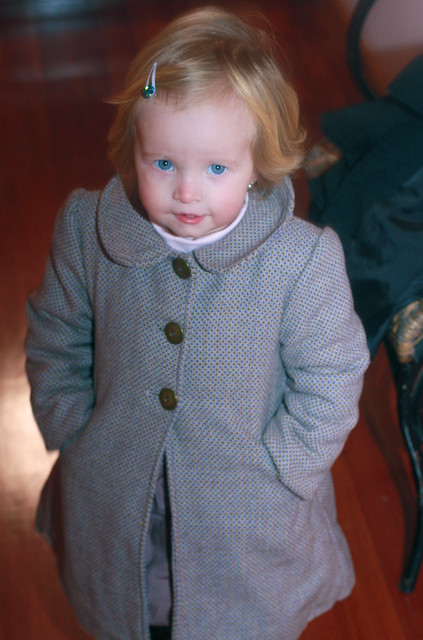