Nora's vocabulary continues to advance. She's big into repeating whatever you say, particularly the last part, so if you say, "Do you want some yogurt?", and she says, "Yogurt!", that doesn't necessarily qualify as an affirmative response. The problem is, however, that she's not very good about open ended questions. "What do you want?" still isn't likely to result in any meaningful communication, although if she's been asking for something, she will repeat what she wants (hint: it's usually a cookie). Where she really excels and proves her vocabulary and understanding abilities is with identification tasks, particularly questions beginning with "Where is...". Just after Thanksgiving, when we introduced her to my friend, Jacob, she was able, fairly quickly, to answer "Where is Jacob?" by directing her eyes at him. With more exposure to him, she would have been pointing and eventually walking over to him to touch him.

Also through this "Where is?" method, she exhibits an understanding that I have many names: Daddy, Papá, Aita (Basque), Poppy, and Erik. The same goes for her mother.

Her humanoid anatomy vocabulary is quite good too. She can identify at least a dozen body parts both on herself and on other people and stuffed animals. She doesn't yet comprehend possessive pronouns, so I have to ask where "Daddy's nose" is, as opposed to "my nose".

A slightly more impressive feat is her ability to answer the question "Who is this?" when the interrogator points at someone, either in person or a photograph. In this manner, she can properly identify, by relational name (e.g. Mommy, Grandpa, etc.), her parents, all four grandparents, both living great-grandparents, her Spanish aunts and uncles, and a half dozen stuffed animals.

Probably the skill that impresses me the most is her ability to properly generalize her internal animal archetypes. She learned what a penguin is from a stuffed animal she has. From that, she can identify penguins on television, photos in books, and stylized drawings on her clothing. Although she understandably gives a false positive with puffins.

Her ability to spot one of her favorite animals – which currently rank thusly 1) elephant, 2) penguin, 3) Minnie Mouse – in a scene is rather staggering. Many times we'll be walking down the street, and she'll say, "¡Pingí¼ino!", and then it will take me a good minute to figure out where she's just seen a picture of a penguin, but every single time she's right; there is a penguin. Both Mickey and Minnie are identified as "Minnie".

Just today I was watching a news segment about the American politics, and there was a tiny emblem of the Republican party in the corner of the television screen. Nora shouted with glee, "Fante!" (rhymes with Dante, short for elefante). Once again, it took me a minute to figure out she was referring to the symbol of the Grand Old Party. That's pretty abstract.

In honor of her obsession with pachyderms, I have done some creative photoshopping. 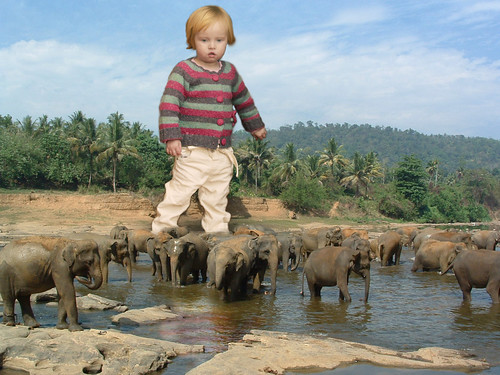 ¡Fantes! View large. It was quite tough getting her to look down for the photograph. 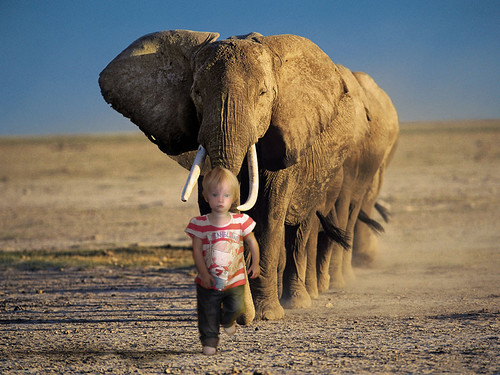 I like the first one better. It was a lot easier, particularly because the light in the initial environment was so diffuse. Reflection and clipping are pretty simple. The second one, with the setting sun providing a horizontal yellow light, was much more difficult. Adding lighting to the foreground subject was a challenge. To my brain, in the second image, she pretty clearly stands out as not having been there in the original photograph, whereas the first one looks like she might've wandered into a museum diorama or something.