It's that time of year again. Time to walk through the chilly air from bar to bar in Laredo, Spain, eating elaborate tapas, called pinchos, and imbibing fine wine. This is the third year, and it seems to be getting better every year. The Semana del Pincho is one Christmas tradition I could definitely get used to. Before we get to the mouthwatering photos, I'd like to quote myself from last year about why I like this event so much:

There are several reasons why I am in favor of this festival as a general local citizen. It gets people out into local establishments, spending money and applying social lubricant, it provides a stage for local restaurateurs to showcase their craft, and it generally makes for a more contented populous. Triple win! 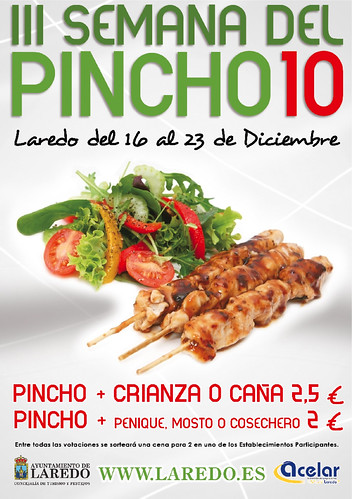 Here's the PDF of the brochure.

I'll present the tapas in the order that I consumed them. 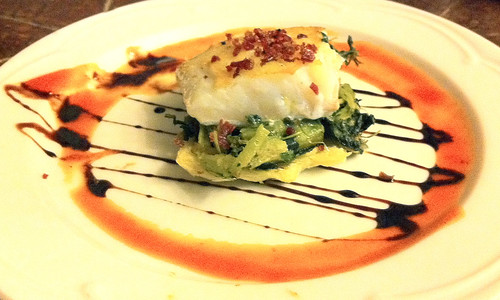 I was very concerned that we might have had the best one first. 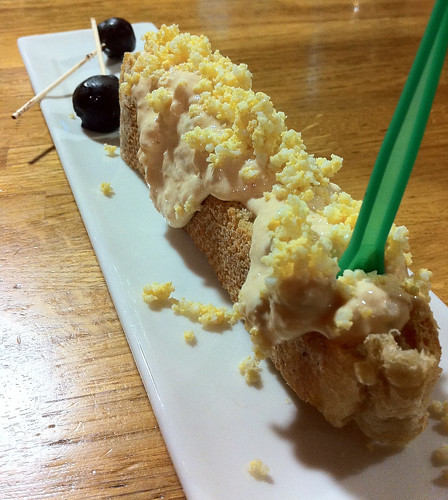 It was good, but pretty close to a tuna salad mix I can make at home. 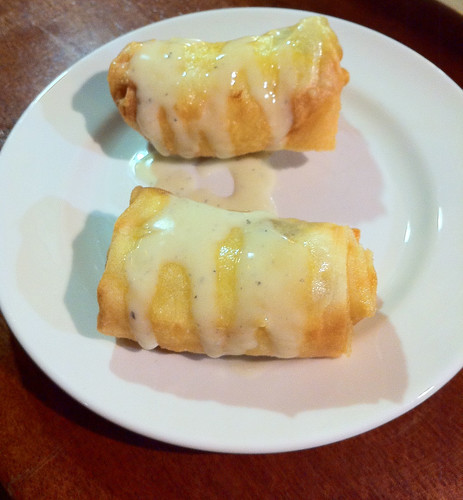 It was good, but we were still disappointed because of the good food we've had out of the Marina Company's kitchen before. That, and... 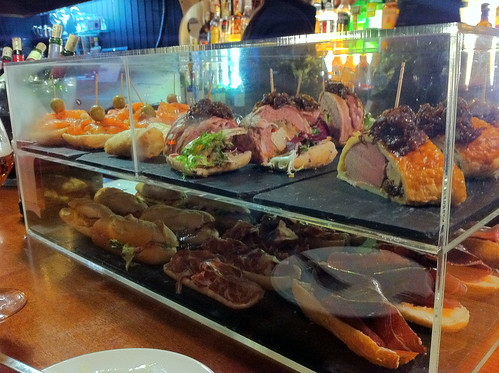 The pincho they had for the competition was the least attractive thing in this big pincho display case they had on the bar. How could we not be disappointed? 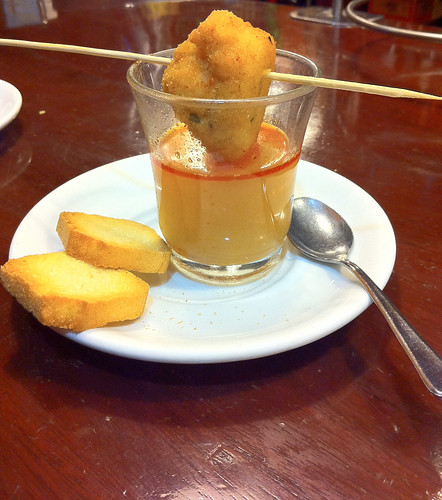 The brochure reads "ropa de pescado", which means "seafood clothes", but I'm pretty sure they meant "sopa de pescado", so that it's "seafood soup". The soup was very good, especially with the cold weather, and they do an excellent job with croquettes at Cafeterí­a Colón. Their kangaroo croquette was our favorite pincho last year. 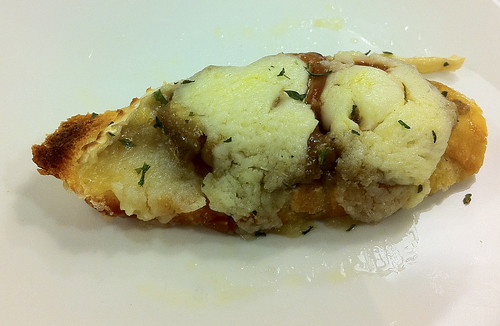 The presentation was absolutely abysmal, very unappealing to the eye. But holy cow, it's foie and goat cheese! It was wonderfully delicious! It definitely got top marks for taste. 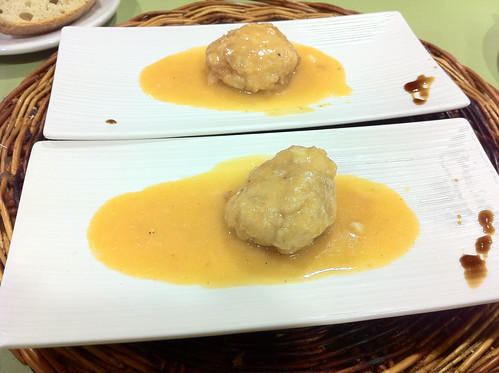 Again, the taste was better than the presentation. The chef is a friend of ours, and he told us that they weren't given much time to sign up for the competition, so they threw in an old favorite instead of getting too creative. 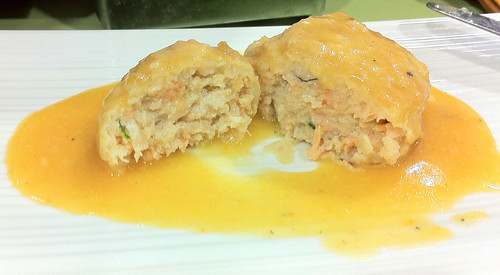 Inside the fish meatball. 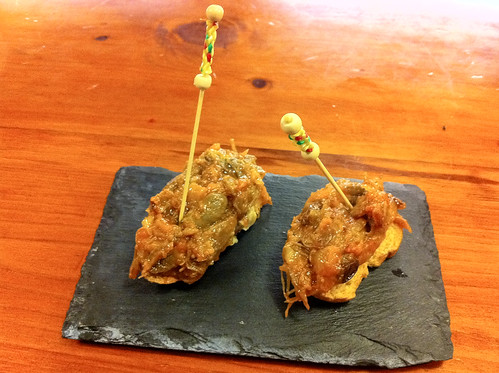 This was the first year for El Portalón. Being mainly a restaurant more than a bar, they are usually closed during the work week in the winter, so agreeing to be open all week long for pinchos has never really appealed to them. But then they participated in another pincho competition this past summer and won first place, so their fans forced them into participating in the winter competition.

I'm not a very big fan of anything a l'orange, but this pincho was very good. The use of a slate shingle as a plate was a clever touch. 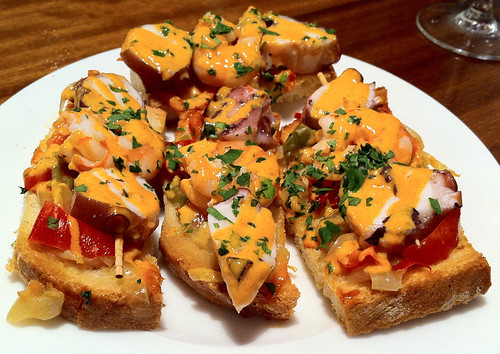 That's four of them in the picture because we met up with some friends. This one was very, very good; easily in the top three. The following day I turned on the television and the regional news was doing a report on this Semana del Pincho, and they specifically went into El Somera and interviewed the chef. 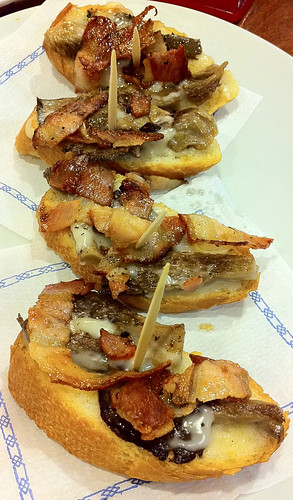 La Cabaña - The Tramline: toast with cheese and mushrooms.

This was the biggest discrepancy between description and quality; the pincho was much better than the description made it out to be. I was pleasantly surprised. Plus, the cheese was a strong blue cheese, which is always fun.

Dolce Vita - Skewer of Marinated Chicken: chicken, pepper and cherry tomato on a piece of toast.

This was good, but nothing special. 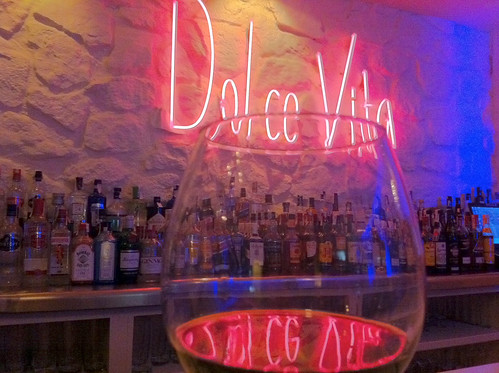 A cool photo of the neon bar sign reflecting in my wine while I was waiting for my pincho. 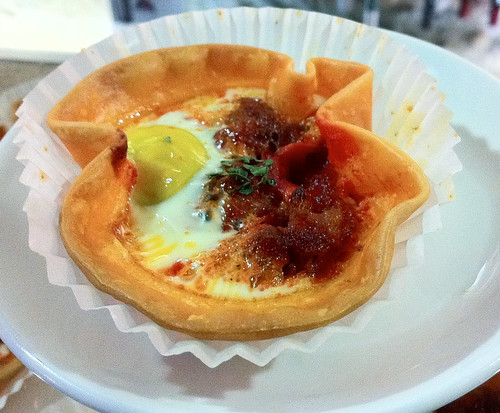 This was tasty, but colder than it should've been served, and a lot smaller than it looks in the photo. Good idea, but mediocre execution. 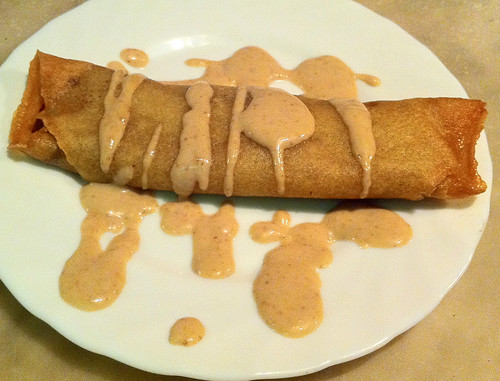 This was a very pleasant surprise. It was bigger than most of them and full of mushroomy goodness. Moscatel sounds like a telecommunications company to me, but it's really a port wine. 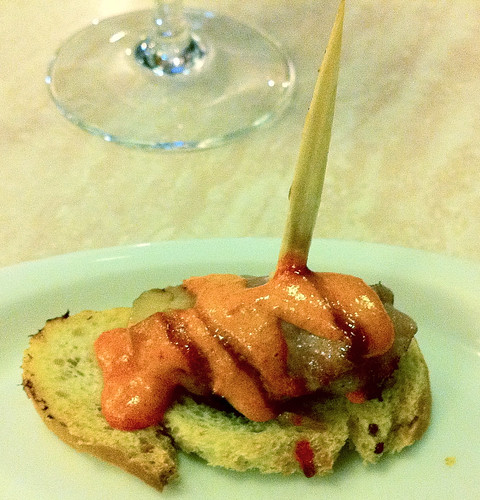 El Sinfo has had the worst pinchos in this competition in past years, and this wasn't much better. Meh.

I had no idea what Boletus edulis was, but I've since learned that it's a species of wild mushroom. The presentation and taste were excellent, but by the last bite, the pí¢té was pretty cloying. 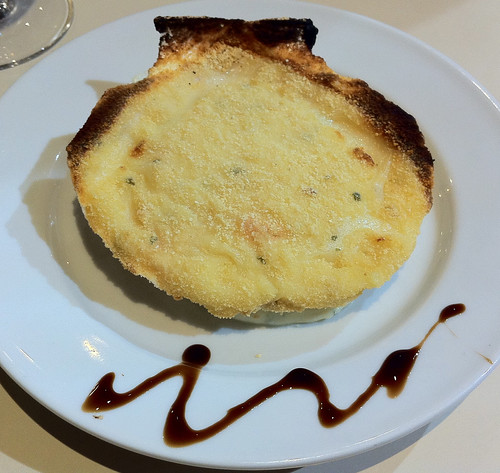 The bartender told me to be careful because it might be very hot, so I waited a couple minutes and it turned out to be cold. Despite that mishap, it was very, very good. We had something similar at our wedding. 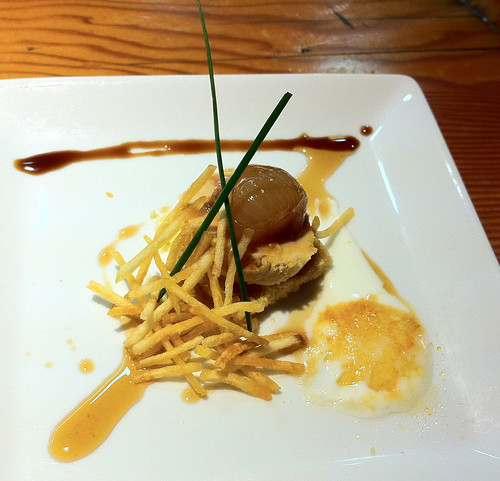 The presentation was unrivaled, but the taste was only average. The potato sticks were a bit impractical to eat with a fork. 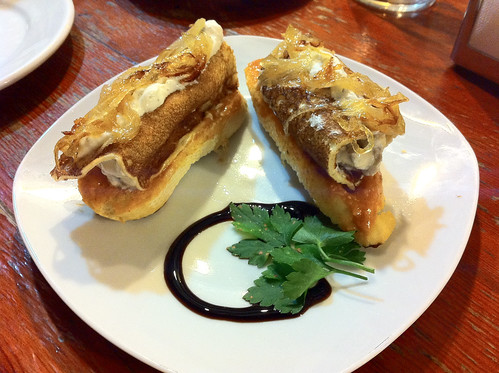 It took us three visits to La Casona to finally get their pincho; once they were closed and another time they had run out. But it was worth it. Boy, was it worth it! What a wonderful sensation with the scallops, mushrooms, cream and cheese all mingling in your mouth. Fantastic!

The competition was fierce. It is extremely hard to pick a winner...but here we go:

Going from bar to bar eating pinchos and drinking wine is probably my all time favorite activity, and it's the part of Spanish culture I would most miss if I were ever to leave Spain.

It took me four nights to visit 17 of the 22 participating establishments, and I loved every minute of it. Is it time for next year's competition yet?