Nora's language skills have made major advances lately. I continue to be astonished at the facility with which she understands both English and Spanish. Below are some anecdotes from this past week.

The other day, I was walking her down by the docks on a sunny cloudless day, and she looked up and said "Water!" In retrospect, I'm pretty certain that she was asking me for some water, but at the moment she said it, I thought she was associating the blue of the sky with the color of water. "No, no, I said, that's sky." She repeated, "Sky." And after a second or two, she said, "Cielo," which is the Spanish word for sky. I was blown away. Obviously she's going to pick up some Spanish vocabulary from daycare, but understanding the generalization that is "sky" and perfectly equating it with its equivalent word in her other language is no simple feat. Shortly after she learned the word for sky, I pointed out the moon and taught her to say "Moon!" The next day she surprised her mother when she picked out the moon in the illustrations in her bedtime story book.

Sometimes without warning, she'll remember her first snow and begin saying "Snow! Holy cow!" And of course any snowy imagery will also set her off with that. "Oh my!"

Yesterday, when I was putting Nora's new winter coat on her, she said, "Frio!" (cold). "Yes, that's why we're putting your coat on you," I replied. "Frio!" she repeated.

Her pronunciation is still far from perfect, and often times we cannot tell what she's saying. I find it interesting the words that she seems to think are homonyms. She says both "Dora" (the Explorer) and "koala" like "dola". And she refers to both "Grandma" with the same sound, "mema", that she uses for "quema" (it burns) to say that food or bathwater is too hot.

Often times when we are out for a walk, Nora will shout some word she knows, like "fante!" (short for elefante) or "doggy!" or "Minnie!". Many times I will be unable to see the object she has so gleefully identified, but if I take the time to look, somewhere in the scene there is a picture or drawing of an elephant, dog, or Minnie (or Mickey) Mouse.

Yet another unforeseen benefit of the Apple TV that we have discovered is that the photo slideshow screensaver works very well as vocabulary flash cards. Nora will stare at it and identify people she knows in the photos. After I reset the Apple TV yesterday, it defaulted to the factory installed screensaver of wild animal pictures, many of which Nora can identify. Her two favorite animals at the moment are elephants and penguins (fante! and pinguino! to her). I think I may actually make some photo sets to teach her vocabulary in the future.

This morning, she spotted her mother's coat and said, as clear as day, "Mommy jacket". She hasn't yet mastered putting more than one word together, with the exception of her favorite verbless behavioral reprimand. She can also pair objects with states, e.g. "Shoe off!", to form commands, but I'm looking forward to her gaining subject-verb-object grammar. 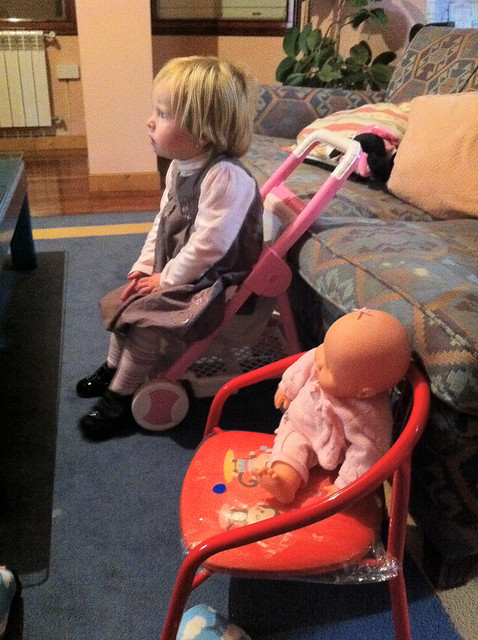 Much to her father's liking, she's taken a shine to Looney Tunes. "Bunny!" she shouts whenever Bugs appears on the screen. She has also decided that she prefers to change seats with her baby doll and sit in her toy stroller, but only if the baby is sitting up in her chair too.