[Part 1] [Part 2] [Part 3] We got up early at 7:00, although our neighbors had their television blaring at 6:00 (maybe that's what the complimentary ear plugs were for?). Showers and breakfast in the local coffee shop, and we were out at the curb to be picked up by our tour bus. Actually it was the "bus to the bus" only to take us to the tour company's offices, but when we came out of the tour office with our tickets, the same driver was waiting to take us to Muir Woods, the valley with ancient groves of redwood trees, some of the tallest and oldest trees in the world. Our tour guide was very entertaining, and spoke to us for the entire forty-minute ride over the Golden Gate Bridge, past Sausalito, and into the valley with the forest. The trees were impressive, for sure, but not as awe-inspiring as I was secretly hoping. The forest walk beneath them was magical and silent except for the babbling brook. While they are "just trees", I highly recommend a visit if you're not traveling with a teenager who will see them as such. 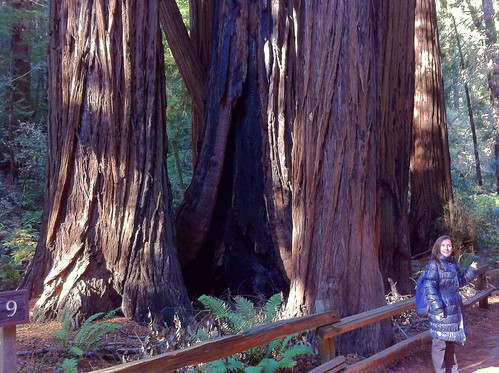 The Muir Woods has Coastal Redwoods, Sequoia sempervirens, which are the tallest trees in the world, can grow to be up to 115 meters (380 feet) tall, although the tallest in the Muir Woods is a mere 79 meters (258 feet) tall. Not to be confused with the Giant Redwood, Sequoiadendron giganteum, which have much thicker trunks and are much older. The oldest tree in the Muir Woods is at least 1200 years old, having taken root around the time Charlemagne was crowned the Emperor of Rome. The fact that they grow together in bunches makes them all the more daunting. 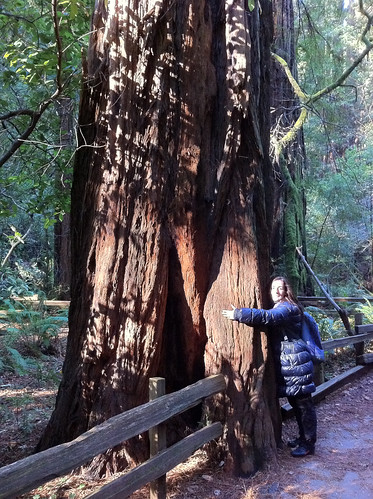 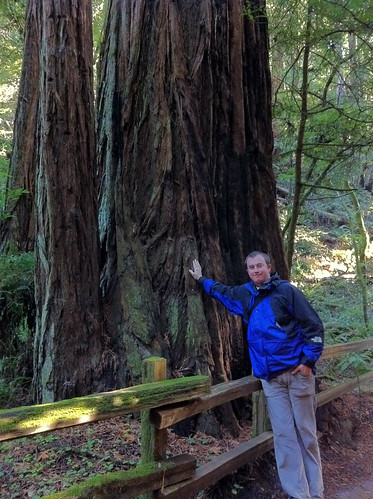 This one almost fell down, so I propped it back up. 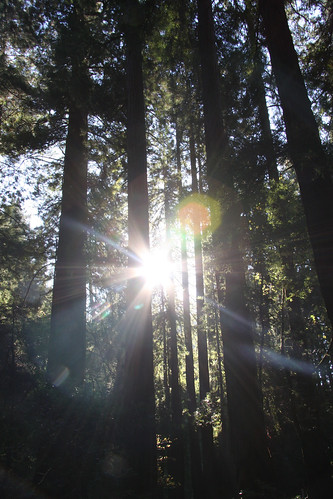 We were surprised by how frigid it was in the forest, with very little sunlight filtering down to the ground. Brrr!! 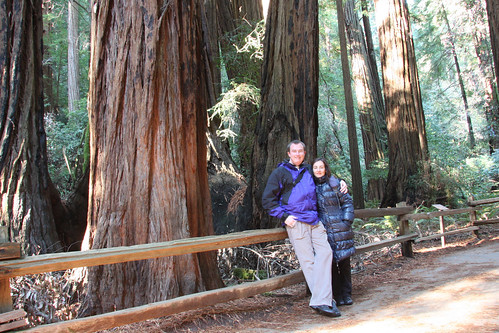 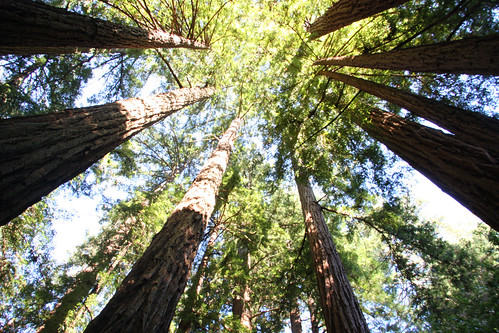 It's hard to capture in a photograph just how it feels to crane your neck from the base of the tree up to the leaves at the top... 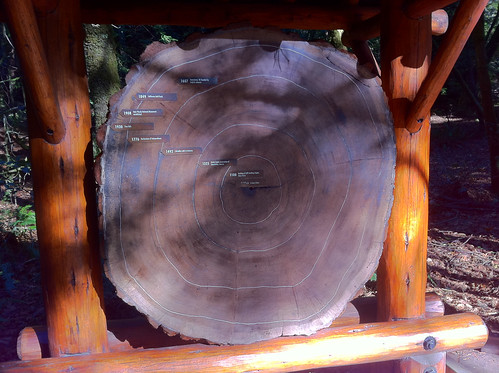 On the way back, we stopped for an hour in Sausalito, a posh town across the bay from San Francisco for the wealthy that enjoy a bit of silence. We entered an art gallery and saw several paintings we loved, but we were really taken with one painting of a woman, entitled Camille (that jpg doesn't do it justice), by an artist named Manaz. If it had been anything less than $4000 for the painting and frame (and we didn't share our abode with a crayon-wielding infantile primate), we actually might have bought it. It was that nice.

We left the gallery, walked along the waterfront a ways, and entered a wine shop. I decided to try the offer of tasting three $40-a-bottle wines for $5. With the proper priming of reading the descriptions of each wine, they were fantastic! The shop owner was a blue-eyed blond who had spent her childhood in Bolivia with missionary parents and spoke fluent Spanish. I left the shop very contented, as I often am with some wine in my belly. The bus took us a short trip across the most photographed bridge in the world and dropped us off at Fisherman's Wharf. We decided to have lunch at Boudin's Bakery like we'd wanted to the day before, but only if they served beer. They did. 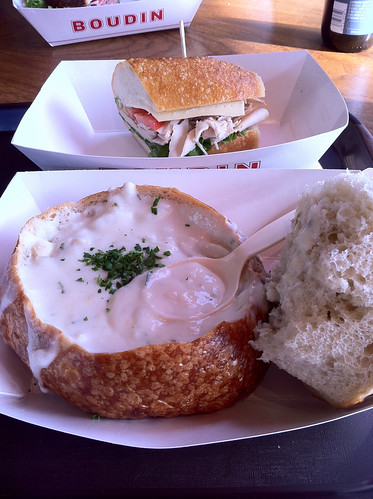 After lunch, we killed a little time by taking our only untravelled cable car line, the California Line, through the financial district. Of course we had to get our iconic "tourist on the cable car" shots. 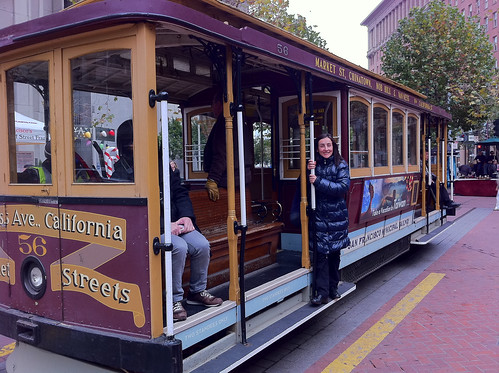 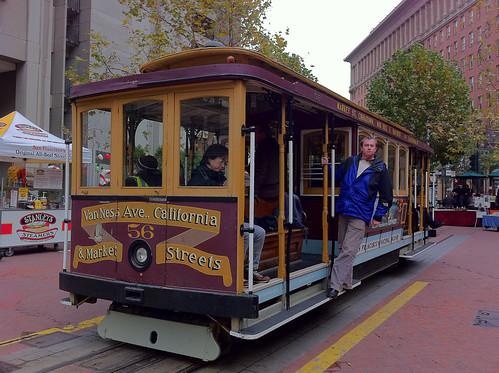 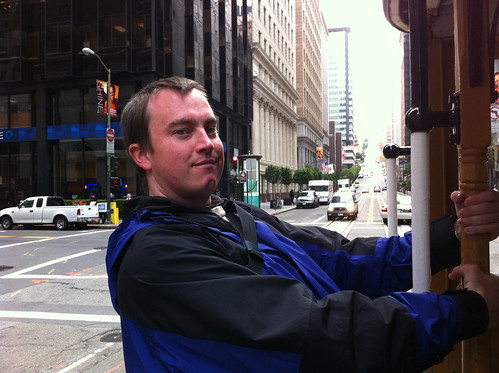 Hanging off the cable car dangling in front of oncoming traffic is more fun than it should be.

Then we took a series of buses to the Golden Gate Park area of the city, but decided to check out the beach first. The beach was so lovely and the sunset so near, that we decided to pass on the park and walk along the beach for almost an hour until sunset. It was as romantic as it sounds, but probably colder than you're imagining it. 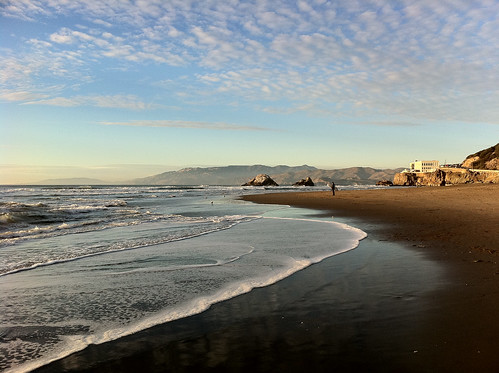 The beach was wonderful, and so long that it stretched off into the horizon. 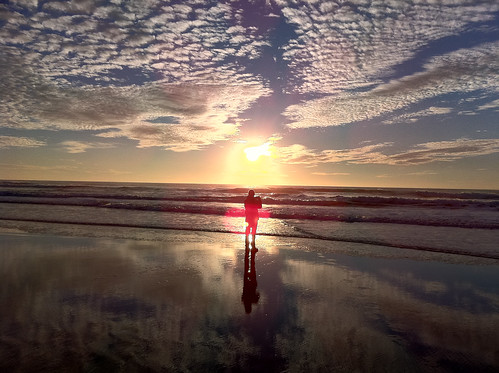 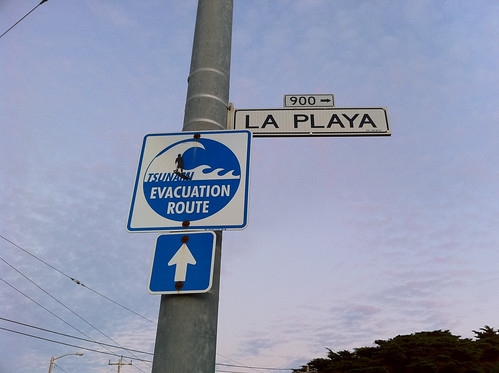 This sign and its defacement made me laugh...not that natural disasters are funny.

Then we headed back to the hotel by bus, got changed, and went out to dinner, at a place where we'd had a beer a couple days before, Fog Harbor right on touristy Pier 39. It was by far the prettiest restaurant we'd been in on our trip with the best views. Marga's fish-of-the-day, blackened red snapper, was too spicy for her, so we switched plates and she had my mixed seafood grill.

After dinner we took our last cable car ride, up the Hyde-Powell line back to Union Square and our hotel. Our visit to the Golden Gate City had come to an end. We slept soundly and until late the next morning. After an hour of casual shopping in Macy's, our van came to take us to the airport. A five hour flight going three timezones to the east really erases your day. I must say, however, that the difference between flying with a child and flying without a child is about as huge as the difference between flying coach and first class (I assume; I never have); it was simply marvelous to be able to nap or read as we desired. 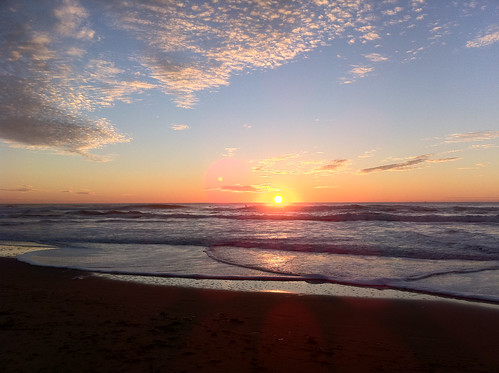 We were grinning the whole flight, so content with our planning and execution of a visit to one of America's greatest cities.