[Part 1] [Part 2] We got up late and were clearly both aching from the day before. My feet were begging for a dose of ibuprofen and another six hours in bed, but I only gave them the former. Tuesday was "meet the Internet people" day, with lunch scheduled with a second cousin I'd never met who had found my blog a few years before, and dinner with an Internet friend of an Internet friend, a social network contact of mine. First we headed to the tourism office, a stone's throw from our hotel, to book a Muir Woods tour for the following day and a quick FaceTime call over their wifi to see how our daughter was doing. Then we headed up the hill on a cable car to visit Lombard Street, The Crookedest Street in the World. After walking down and up the stairs beside it, we took the cable car the rest of the way to The Wharf, as we'd learned to call it. Our feet and bodies preferred a leisurely stroll through the touristy piers to kill time until our meeting with Cousin Michelle. We had agreed to meet in front of the unmissable Boudin Bakery on Fisherman's Wharf, but when we were wasting time walking along Pier 39, we noticed another, slightly smaller, installation of Boudin's Bakery on the pier. "Surely she'll come to the main one," we thought. 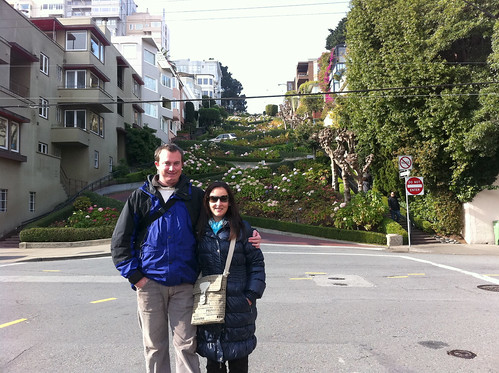 Tourists in front of Lombard Street. 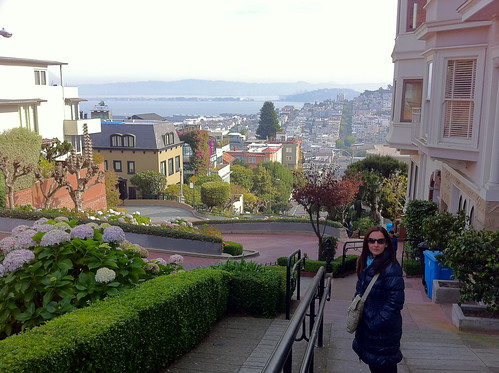 Walking up and down the sidewalk (stairs) was an interesting experience. The street really does need to wind like that because the hill is so steep. 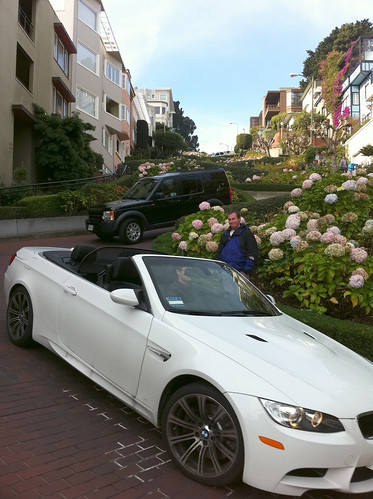 Of course it's an absolute must for driving your convertible down. 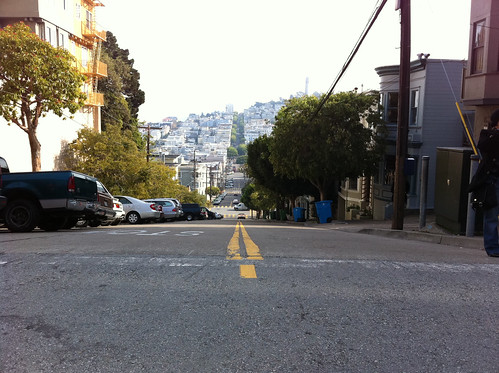 I liked the way the parallel street lines became almost dots with the right perspective.

We got to the bakery at 12:20 for our 12:30 meeting. By the time 12:40 rolled by, we began to worry. We had just set up this date the previous night, so surely she couldn't have forgotten! Unfortunately, I only had my Spanish iPhone, so I had no data coverage to send or receive messages to Michelle, but Marga had the idea of me going a few blocks down the wharf to a restaurant we had been to on Sunday where I had the wifi password. I did, and I had a message from Michelle saying that she had waited in front of the bakery for a while, but that she'd decided to go to Hard Rock Cafe to meet some friends. I knew the Hard Rock Cafe was on Pier 39, so I assumed she'd been waiting at the other bakery. We were a little disappointed to pass up a clam chowder in a bowl of sourdough bread, but we rushed on over to the Hard Rock Cafe and found Michelle having a sandwich with some friends. She decided to join us at a new table, and Marga and I ordered fajitas and a burger respectively. Our chat with my cousin was delightful. We discussed our jobs and education and the relative structure of our branches of the family tree. She's an entrepreneurial marriage/child therapist working on her PhD, and she seems to be an avid fan of Nora, as well. 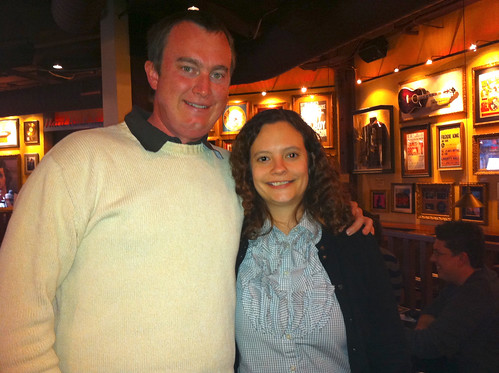 Second cousins. Her maternal grandmother is my paternal grandfather's sister. So our common ancestors are our great-grandparents, Halfdan and Ruth.

After lunch, we headed towards the Mission District because Marga had heard there was an old Spanish church, Mission Dolores, there that was a must-see. We got off the cable car around City Hall and walked from there, which was interesting, but put the final nail in my left foot's coffin. I was limping down the street when we stumbled upon the church by accident. We paid the five dollar self guided tour fee and entered. It was much more interesting than I had anticipated and we learned of the founding of the city now called San Francisco. While we enjoyed seeing Mission Dolores, we both agree that it was the tourism activity that we would have least minded skipping. 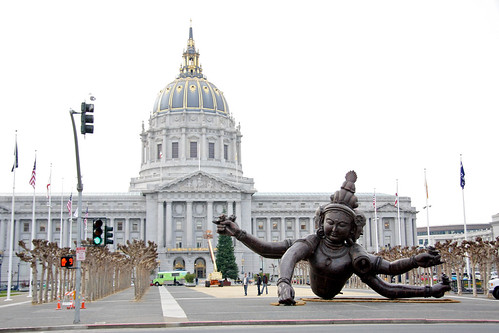 City Hall was quite a pretty building, especially with the big freaky Buddha statue in front. 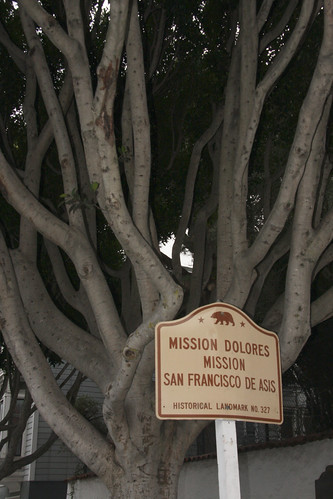 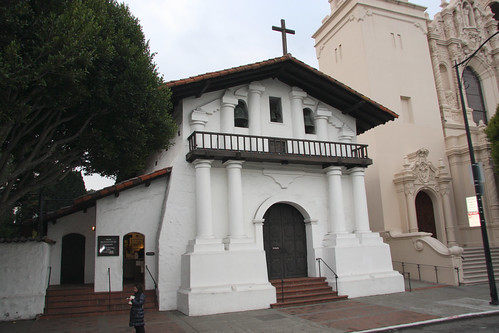 Mission San Francisco de Asis. It's made with 4-foot thick adobe mud walls. How else could a building five days older than the United States (seriously, June 29, 1776) remain standing through all the earthquakes? 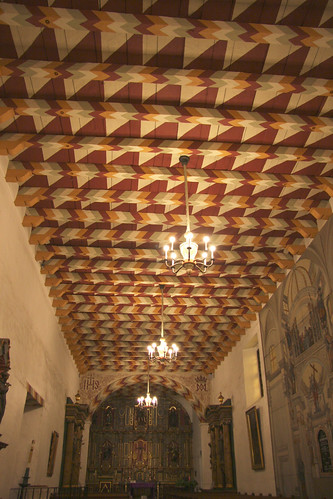 The ceiling has "Native American patterns". 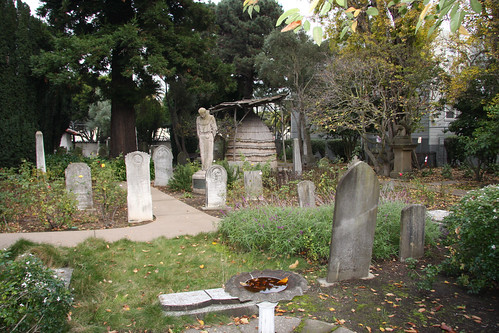 The cemetery was very lovely. 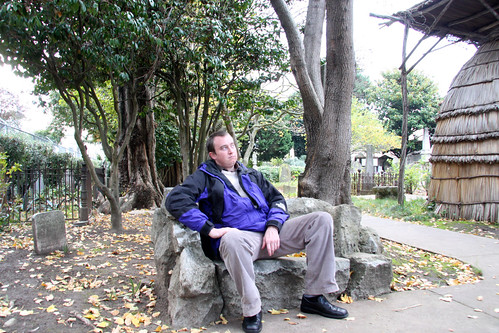 I found an uncomfortable bench in the cemetery to rest my feet. 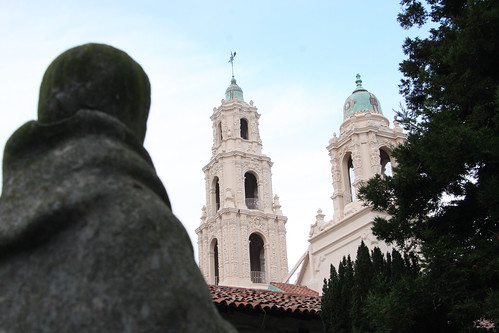 A grave figurine looks up at the neighboring basilica. 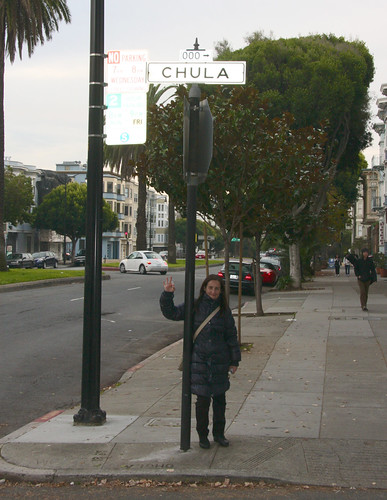 The Mission was right next to Chula Street. So I had to get Marga to pose by the sign. Chula, in Spanish, can mean everything from wench to rascal to sly, but is generally a playful term of endearment for a woman. 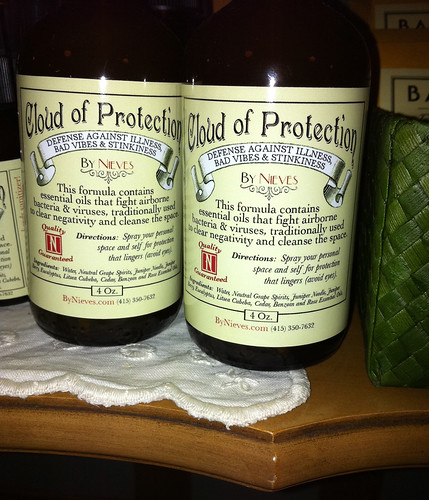 The Mission District is known for it's very, let's say, eccentric shops. We went into one where the woman was excited to tell us about the local artists that designed all the clothes in the shop. This "Defense Against Illness, Bad Vibes and Stinkiness (avoid eyes)" spray was in that shop.

Later we found Alamo Square, the vantage point for one of the most iconic views in all of San Francisco, looking over The Painted Ladies, some Victorian houses to the skyline behind. Dubbed "Postcard Row", it may be best known for being in the opening credits to the Full House television show. 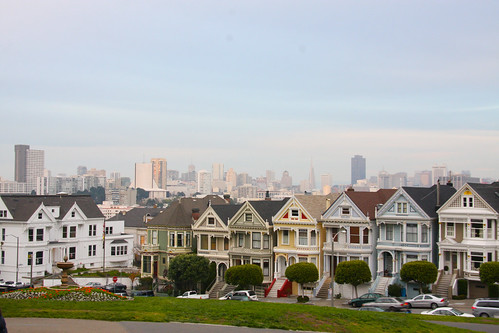 At dusk, we took a bus back to Union Square, but didn't go to the hotel. Instead we decided to kill some time (Happy hour!) before our scheduled dinner in a local Irish pub. The local beer, Anchor Steam, was our favorite cool beverage across our stay in San Francisco. Our dinner date, Emily, had been worried that at 7:30 PM dinner might be too early for us Spanish types, but it was the latest we ate dinner throughout our entire US trip, I think.

A bus dropped us off a few blocks from the restaurant, but what looked like a simple three-block saunter on our tourist map actually involved darting across a freeway onramp and then an uncomfortable walk through a very dark neighborhood with some vociferous sidewalk characters with whom we did our best not to make eye contact. Later, Emily would tell us that the restaurant was on the edge of the good safe nightlife area.

Dinner with Emily was at Bar Bambino, "a cafe and wine bar celebrating food, wine, and live culture of Italy". She had made our reservation two weeks in advance. We felt a little out of place there amongst the fashionable hipsters in our tourist clothes carrying a camera and backpack that we still had from when we left the hotel ten hours earlier. Bar Bambino was, however, exactly what I'd asked Emily to find for us, a place that the locals respect but that an out-of-town visitor would never find on their own. 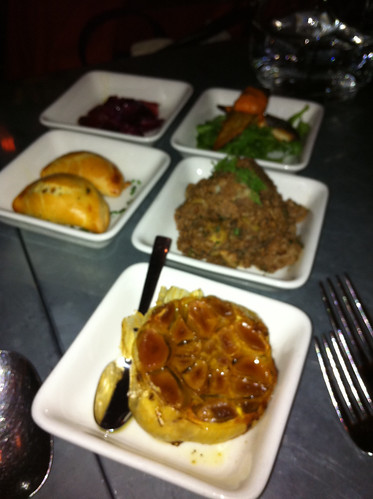 Our antipastos. The one in front is a fried bunch of garlic with the top chopped off. We found them to be not nearly as special as they were made out to be by the colorful string of adverbs recited by the waitress.

When I pulled out my camera, I swear Emily said, "So you're going to get all Simon Litton on us, are you?"

Although we read each other's blogs and are friends on Flickr, Twitter, and Facebook, we've probably only directly exchanged about hundred words to each other over social media. She's a friend of sgazzetti's. He told me that "she is among the first, and by far the most intense and enduring, of those people [he] got to 'know' via the internet and then met in meatspace". Due to the friend-of-a-friend nature of our relationship (and Marga being even further removed), our conversation was a little awkward at first, but we soon warmed up talking about Emily's work as a self-employed organizational consultant. At some point we switched to politics and found ourselves agreeing on just about everything.

Both our meals with "internet people" were lovely. It was nice to put a voice and some mannerisms to people I knew only from their Facebook posts. 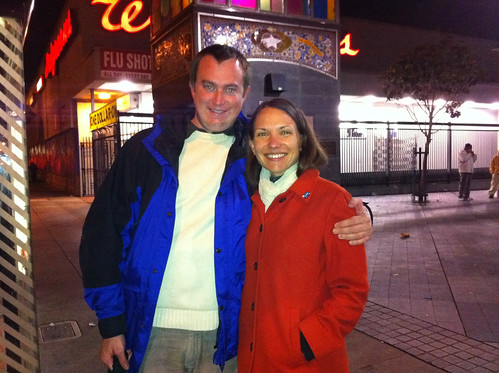 We reluctantly declined a cocktail with Emily because we had to get up early the next day to see the tallest living organisms on the planet.