The night before our 9:40 AM flight to San Francisco, which required getting up at 6:00 AM, Nora was kind enough to remind us just why we were leaving her behind on our coast-to-coast adventure; she woke up crying at 2:00 AM and kept us up until just before 4:00 AM. By 3:10, we had ascertained that her demands were that she be in her crib – not in our bed, or up playing – with her mother – not her father – uncomfortably bent over the crib holding her hand. She'd had a fever the day before, but was only suffering from a stuffy nose at this point. We broke off negotiations and let her cry for the 45 minutes until she finally understood the futility. "Remind me of this when I get all 'I miss my poor baby!' in San Francisco," Marga whispered to me. The TSA agent at airline security confiscated one item of contraband from each of us. Marga had an unopened bottle of water, which she had taken out of her bag to be in plain sight, but it took the x-ray machine to find my illegal possession. Unlike in the airports in Europe, in the Charlotte airport, they let you see the x-ray screener's screen once you've passed the metal detector yourself, which is cool. I always like seeing the contents of my bag with their technology. When she stopped and called over a colleague on one of our bags, I knew something was up. Act natural! Act natural! She opened my bag and found my bag of toiletries, examining each one, eventually settling on a canister of shaving cream that I haven't used in about two years. "Sir, this is over the size limit for aerosols. So I have to take it from you." I agreed and we were on our way. No backscatter, no pat-downs, not even a glance at my groin. What frustrated me the most about the TSA experience was that their stupid theater act worked on me; I was impressed at they had been so skilled as to identify a contraband item from an X-ray of a bag full of various items, and I felt safer because of it.

The van to the hotel was painless, and we were unpacking into our room by 1:00 PM. It was time to find some lunch. We ended up at Blondie's Pizza, which seems to be a Bay Area pizza chain. Eyes bigger than stomachs, we chose five slices for the two of us. Then we found a road heading north and walked through Chinatown, Little Italy, and ended up at Fisherman's Wharf. 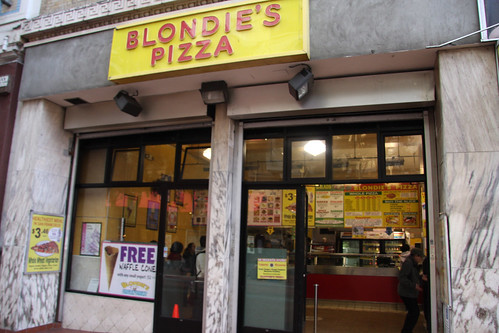 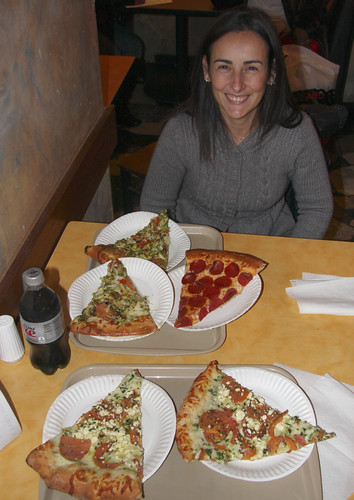 Happy Marga with our five slices. 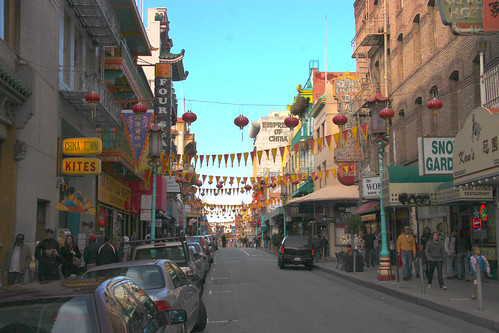 Chinatown. We stopped in one grocery store with everything labeled in Chinese – we did deduce one jar to be full of shark fins, for $30/lb – and little old Chinese women going about their shopping, occasionally shouting questions to the store manager. We determined that we'd rather not put anything in that store in our mouths. 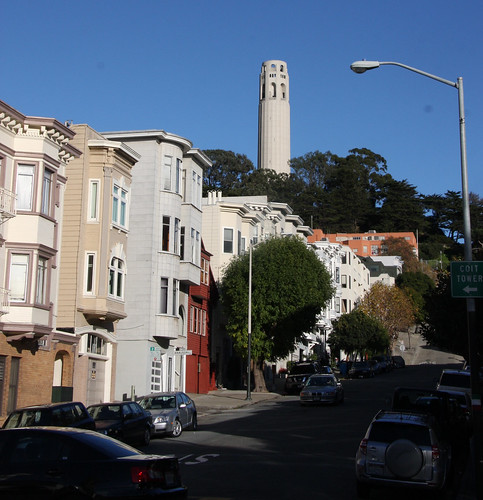 Coit Tower. Famous landmark. But only worth one photo, in my opinion. 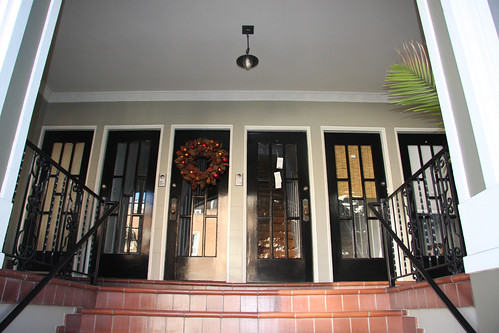 Marga and I marveled at the idea of having one door per apartment. 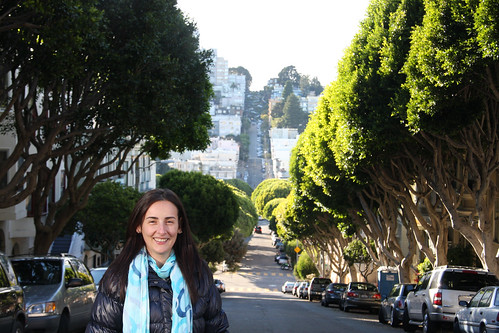 It's hard to tell, but that's Lombard Street, the crookedest street in the world there in the distance. For some reason that's the one entry, of the thousands, I vividly remember from a Guinness Book of World Records I had in my childhood. Stay tuned for more photos of Lombard street in future posts. 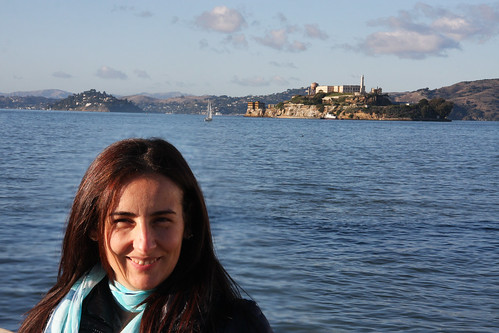 Marga in front of Alcatraz. I'm rather proud of this photo, which I digitally constructed from two separate shots to get both her face and the island in focus. This is more or less the shot (taken by shooting you in front of a photo) they try to sell you for $20 when you do the Alcatraz tour. 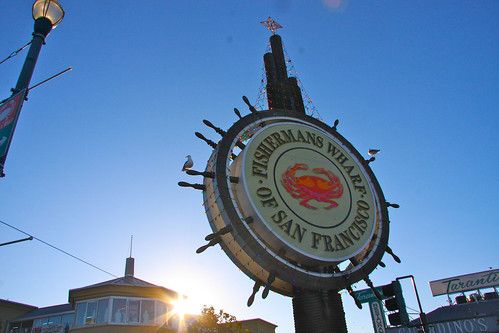 We finally arrive to Fisherman's Wharf, which was all decorated for Christmas. 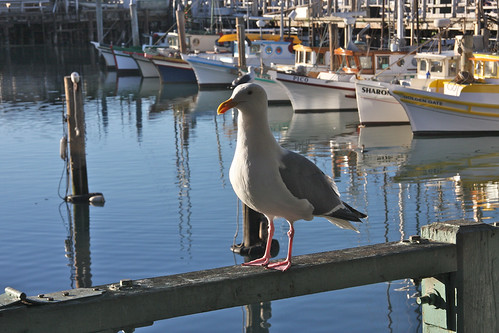 The seagulls were as pushy as the homeless, both asking for handouts. 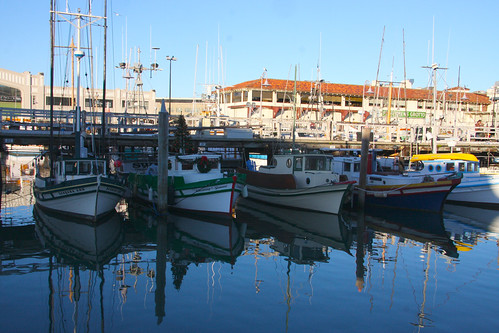 I wonder how much a marina slot costs in Fisherman's Wharf? On second thought, don't tell me.

We were interested in a ferry ride some time, but when we heard a woman offering an "Under The Bridge" ferry tour departing in ten minutes – and I noticed that we were approaching what photographers call The Golden Hour, the last hour of daylight before sunset when everything is more pretty – I suggested we take it.

On the ferry, we ended up on the starboard side, which was good for viewing the bridge and Alcatraz island, but there was no speaker our side of the boat, so we missed out on just about all of the commentary from the captain. 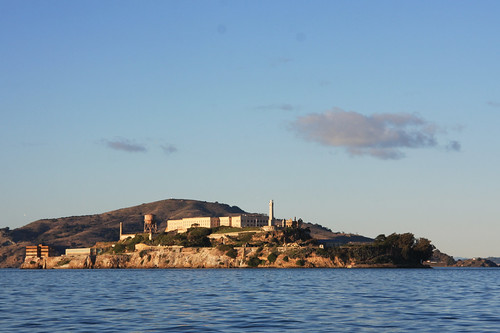 The setting sun hits The Rock. 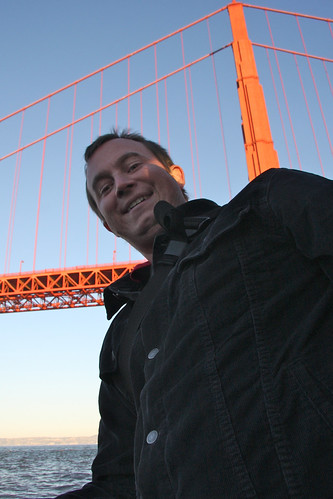 Due to the sheer number of photographs I took of the Golden Gate Bridge at Golden Hour, I'm going to reserve those for a future post. Let's just say, "That's one photogenic bridge!" 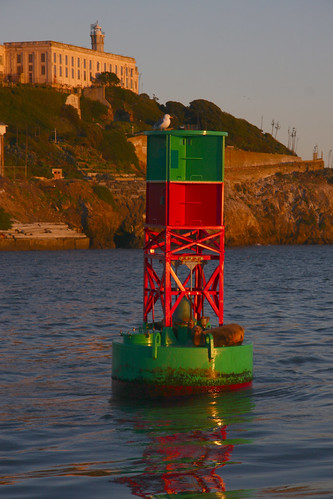 Sea lions rest on a buoy at sunset near Alcatraz. 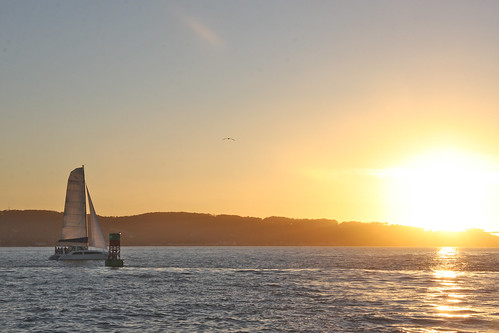 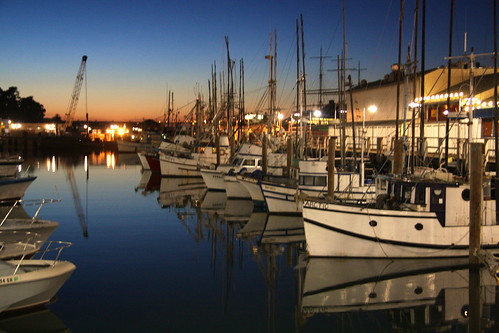 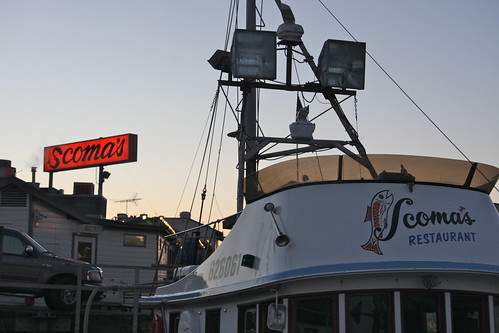 Back on shore, we found Scoma's, a restaurant recommended by our friends Jeff and Jane. A quick look at the menu told us that it was a fancier place than we were ready for after our pizza lunch, so we decided to return the following day and found a cheaper place, Pompeii's Grotto, which, as Marga pointed out, must be less posh, since the tablecloths were a red checkerboard pattern. A shared clam chowder and Caesar salad filled us up, and we walked back to the hotel, but left again shortly to have a beer at a local bar to try and adjust better to the western time zone, even if we did end up back in the hotel room by 8:45 PM. 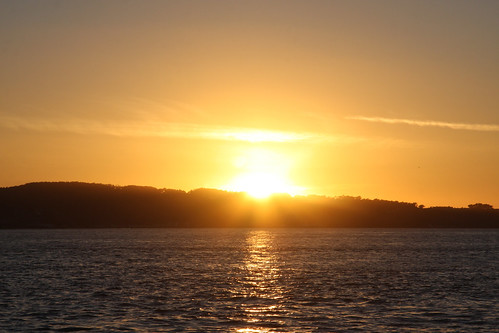 On Sunday, November 28, 2010, we came very close to seeing the sunrise over the Atlantic and set over the Pacific.