On Saturday, we flew from Bilbao to Munich to Charlotte. There are a few good anecdotes from the journey to share, so I thought I'd commit them to the Internet.

I was expecting extra tight security, as that's what the US and European media are all atwitter about. In the Bilbao airport, it was early in the morning, and the Guardia Civil agents that run the airport security seemed pretty disinterested. I didn't even have to take my laptop out of my bag. I had to put the bag that normally hangs from Nora's stroller through the x-ray machine, but it contained a large bottle of water, a pocket knife, and various canisters of powder. I asked if the stroller should go through the machine too (it has before), but the agent said I could just walk through the gate with it, leave it on the other side, walk back through, and then walk through it myself to make sure I didn't beep. He then casually glanced under the stroller where the plastic cover was, but didn't remove it or look under it. There was plenty of space to hide a semi-automatic handgun under there. And off we went to our gate... We normally try to make our two-flight hop to Charlotte via Frankfurt, but this time I discovered that Munich was an option as well. In the Munich airport, I was amazed that our departure gate was in the same terminal as our arrival gate. Almost always (London, Paris, Madrid, Frankfurt) you have to switch from the intra-Europe terminal to the intercontinental terminal; this is the first time we didn't have to do that.

The other standard step is going through the extra-paranoid "OMG, you're flying to the US!?" security at the departure gate, where they ask you how long you've owned every piece of electronics in your bag. It's been like this ever since I emigrated shortly after September 2001. But there was nothing; no additional security at our gate. The same handgun I could have boarded with in Spain could still be with me, flying over Washington, D.C.

Our layover was the perfect 60 minutes, and by the time we were at the gate and found some seats, they were announcing that the rich people could start boarding. We decided to visit the restroom before embarking, so first I went, while Nora and Marga watched the stuff, and then they went to change Nora's diaper. When they came back out and we were about to get up to board the plane, Marga said, "Umm...did we put all the diapers in the checked luggage???!!?" After three minutes of frantic searching through our bags like I'd expected the security folks to do, a feeling of doom settled over us...

We boarded a nine hour flight with no diapers! 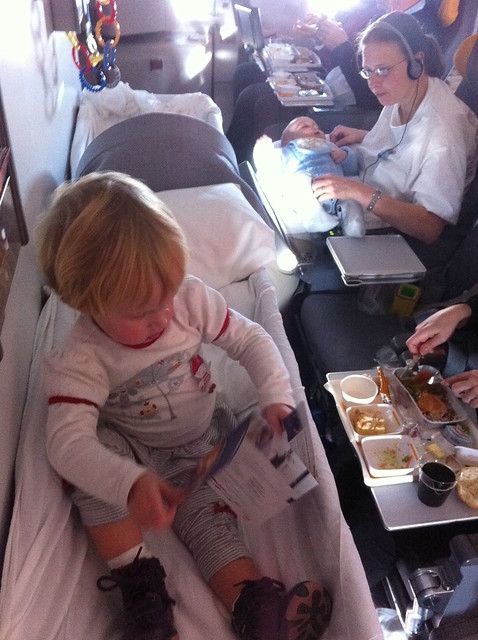 Marga eats her chicken, and a German woman feasts on a small baby.

By about the time we reached cruising altitude, Nora got "that serious look" on her face, pointed to her rear end and said, "Pee pee!", an expression which has superseded "stinky" and applies now to all diaper events. "No, I'm sure it's nothing," I told her nervously. But she was insistent. Right around the time we were contemplating ways to clean out the dirty diaper and put it back on her, a little blond-haired blue-eyed girl whom a casual observer could easily mistake for Nora was carried back into coach from first class by her blond-haired blue-eyed German mother. She walked passed us, and Marga and I looked at each other. Did we just see a path to salvation?

When the blond mother-daughter pair walked back and glanced at Nora, I asked, "I'm terribly embarrassed to be asking this, but do you think we could have one of your extra diapers?" I had to consciously avoid the word "borrow". Although any half-decent person would say yes to that plea, she was overly kind about it in a way that dovetailed nicely with the selfless politeness stereotype I have of northern Europeans.

A quick plug for Lufthansa... We normally, on the Bilbao-Frankfurt-Charlotte trip fly with US Airways. When we flew in March, we didn't know that we could request a bassinet, and dealt with having Nora on our laps for the whole flight to the US. But on the way back, we requested one and it was a hundred times nicer not having her on top of us the whole trip. We were a little worried that Nora wouldn't fit into the bassinet very well, but the Lufthansa bassinets were twice the size of the US Airways ones, and much more sturdily designed. Along with the eerie pre-9/11 lack of security, we also found that the booze was free on the Lufthansa flight like it used to be back in the good ol' days. I didn't dare order wine with my chicken meal, but then the guy behind me ordered a rum-and-coke with his, and didn't pay a dime, so twice later in the flight, I went back to the galley and asked for a beer, which was given to me cold in a can with a plastic cup. Rock on, Lufthansa!

We had one stretch of sixty miserable minutes during the nine hour flight in which Nora was screaming at the top of her lungs and was punching at us angrily when we tried to console her. The problem was that she was sleepy and she always naps in her stroller, which was unavailable to us. So there we were, at the front of the coach section, with an audience of people wrapped up in their blankets trying to sleep with a red-faced tantrum-throwing child. To anyone who has ever been annoyed by a child on an airplane, I can assure you that however annoyed you feel, the parents are an order of magnitude more peeved.

At about the 59-minute mark, a flight attendant came up to us and said "You can walk her around the cabin if you'd like. Perhaps that would help?" It took all our might not to strangle Little Miss Brainstorm who apparently hadn't seen us try that five times already, but we picked up Nora and walked her around. As if to frustrate us even further, this happened to be the exact moment of exhaustion when walking her around actually did help, and Nora began to fall asleep, the interval between sniffles growing with each minute. What followed was an hour and a half of silence, in which I got a little sleep as well.

When the screen in front of us was informing us that we had three hours more to go, Nora starting saying "Pee pee!" again. I got up and walked to the curtained barrier between gentry and the plebs, and peered through. Within a few seconds, a flight attendant came up to me, like I knew she would, and said, "Sir, you can't go up there." I asked if there was a little blond girl up there, the attendant said that there was, and I explained that we desperately needed to borrow a diaper from that family. This was probably the best excuse she'd ever heard from an uppity passenger, and she let me pass.

Tail, had I had one, between my legs, I walked up to the German-American family and asked humbly for another diaper. With no hesitation whatsoever, they produced one for me. I've been dreading the next time we fly when Nora is over two years old, because we'll have to pay full price, which is often four digits, for her ticket, but here was a 22-month-old girl who had a full first class seat to herself. While eternally grateful to them for saving us from a potentially literally shitty flight, the redistribution of wealth Liberal in me didn't feel too bad inconveniencing them a little.

The descent into Charlotte was filled with screams from Nora. Everybody around us felt compelled to explain that it was because of the pressure changes, but her mother and I know it had almost everything to do with the seatbelt restraining her.

When we'd boarded the plane in Germany, there had been snow on the ground and 2Â°C, and in North Carolina, it was 19Â°C and sunny, a pleasant change.

Nora really enjoyed the people-herding movable bollards used to keep the immigration lines orderly. We let her stray out of line a couple times. "Be careful, there are a lot of foreigners here!", I quipped. Once, she found one of the unused bollards against the wall and managed to get her head stuck between the bollard and the wall, which forced Marga to duck under the tape out of line to help her free. When we finally got to the immigration agent, he was quizzing Marga, the non-American-citizen in our group about her travels. I looked down at Nora, and she was gone. I said, "Excuse me, I'll be right back," and dashed passed the agent, Nora was ten meters away looking at some other passengers. When I got back to our agent, he chuckled, defusing the awkwardness of my border jumping.

The best thing about the slow immigration queues is that you don't have to wait long for your suitcases at baggage claim. Nora wanted to go pet the contraband sniffing beagle, but we wanted to get past customs before they found the goat cheese I'd brought with me. A quick call to my mother and a four minute wait on the curb and we were all piled in the van heading home.

For the first fifteen or twenty minutes of the van ride, Nora was so excited to see her grandmother that she kept shouting "Grandma! Grandma! Grandma!" from her car seat. Our 16-hour trip had been a success.