Recently I have been witnessing one of the things I was most looking forward to as a parent, the bilingual language acquisition of my daughter. You can say "Where's the table?" or "¿Dónde está la mesa?", and she'll point right to the table. The same works for her anatomy and toys. In fact one of the best tricks I've discovered for keeping her occupied while I sit on the couch is to say, "Where is [object not currently in this room]?", which prompts her to run off to verify that whatever is in its place. Every day I try to teach her a little more vocabulary. Yesterday was "elbow" and "knee"; today was "couch" and "TV". But what really amazes me is when I ask her about stuff that I haven't explicitly taught her, and she knows what I'm referring to. That's what really blows my mind. On Sunday, I made a parental blunder. Nora had just discovered that she can inch her way around underneath the coffee table, and I thought it was cute, so I grabbed my iPhone and recorded a video. What happened next was that she began drawing, in crayon, on the underside of the table. In an instant, I quickly calculated the value of continuing to film her contrasted with the value of stopping her from drawing on the furniture. I concluded that, as far as furniture graffiti goes, you can't get anywhere much less noticeable than the under side of an opaque coffee table, so I let her continue.

Unfortunately, she has since had the idea to go "tagging" other objects in the house, managing to draw a little on a wall before getting appropriately chastised by her mother. I fear that for not nipping this behavior in the bud, I may have unleashed a vandal.

When I looked under the table, I saw this: 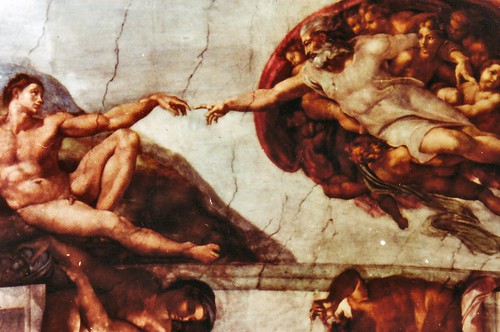 Well, okay, maybe it really looked a little more like this: 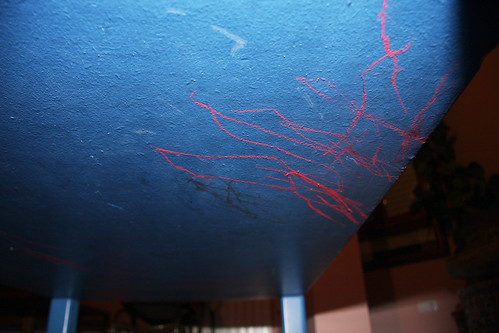