I love the smell of x-ray radiation in the morning. Last night, Nora had an encounter with The Ceramic Bulldog that didn't go so well for either party. She managed to lift the one-kilo ceramic atrocity above the floor and then drop it somehow upon her left ring finger, breaking the dog's tail slightly. She cried for a bit, but then stopped and it was time for bed, so we all went to Cuba. In the morning, her finger was enormously swollen, and she was pretty much crying nonstop "Mano, mano, mano, mano, mano!!!" It was decided that, just to be on the safe side, we would take her to the ER at the local hospital and get an x-ray to verify that nothing was broken, and that kisses really could "make it better". At 8:00, we left home for the hospital. We arrived at 9:10, according to our car's clock (I'd forgotten to set it back an hour for non-DST). The ER was immediately familiar to us, because it was where I took Marga at 2 AM on March 24, 2009, just 11 hours before she gave birth to Nora. With her usual charm, Nora refused to have the hospital bracelet placed on her, so her mother was her surrogate bracelet wearer.

We waited for 15 minutes before the doctor came in and looked at Nora's hand. Every time anyone came within a meter of her (which was every time any doctor or nurse had to deal with her), Nora was screaming inconsolably. They tried to weigh her, to calculate her doses of painkiller, but we ended up having to subtract "Mommy + Nora" from "Mommy" to get her 10 kg weight.

Eventually the radiography technician arrived and told me that I was responsible for holding her still during the x-ray. She put a lead apron on me with a neck guard, and I had to hold Nora's hand still on a plate. Apparently I was chosen because the radiation is less damaging to Nora's chances of having a sibling if her father receives it than her mother. I dutifully held her hand (it took all my might) to the plate, and the technician lady ran from the room shouting, "Tira, tira!" (Shoot, shoot!) In the blink of an eye, we'd both been sufficiently irradiated.

After another 20 minutes in our room, enough for Nora to completely soak her denim dress with water which she kept demanding out of boredom and then spitting out all over herself, the doctor came back in the room and pulled up Nora's file on the computer in the room. He double clicked on her x-ray file and up popped the x-ray of her little hand and mine holding it down. He zoomed in and showed that, although her joints had not yet fully formed, the finger bones were still aligned properly in the damaged finger. This is what we'd come to the hospital to hear, and we felt reassured. He prescribed her some ibuprofen and sent us on our way.

By the time we'd arrived home, the ibuprofen that the nurse had given Nora (only 75% of which was spit back out) had started to take effect and the swelling was down. I took her for a walk and she promptly fell asleep. 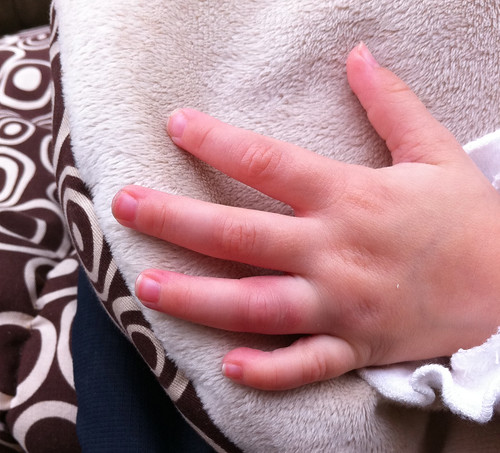 Only once she was asleep was I able to take a non-blurry photo of her hand. The swelling was already down. Hint: It's her ring finger that's swollen! 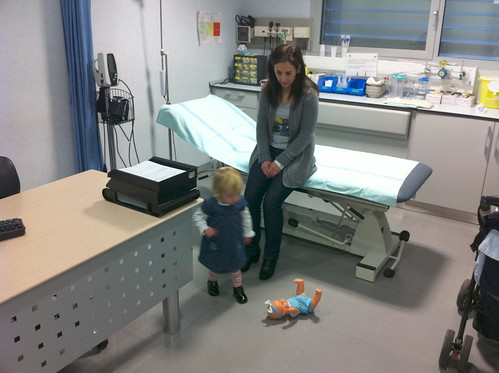 In our hospital waiting room.

The dog, which we have disliked since inheriting it from the previous owners of our house and needed very little provocation to throw it way (frankly, I'd been disappointed in Nora's inability to shatter it thus far), was disposed of on our way to the hospital, despite Nora's melancholy "Doggy! Doggy! Doggy!" rantings.

May all her future visits to the emergency room go so well...