On Sunday we were invited to a meal where the main course was pigeon. Yes, in Spain, people eat pigeons. As far as I know, most of the pigeons that are eaten are raised especially for that purpose, and aren't just captured with a net or hunted with a BB gun in the local town hall square. There's a reason pigeons are called "flying rats".

What follows are some photos I took this weekend, not all related to the pigeon stew. 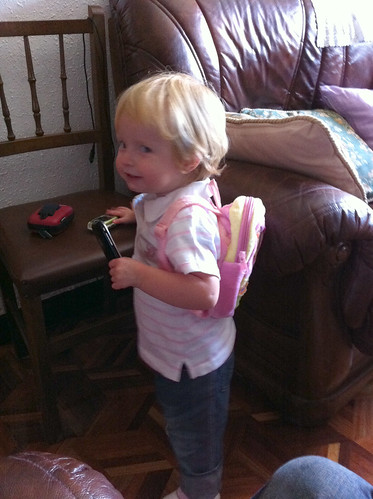 Upon arrival to her grandparents' house, Nora was given a brand new backpack. It features Dora the Explorer (Dora Exploradora, in Spanish) on the back. We were aware of the similarity of her name to that character back when we picked her name. There are already some kids at her daycare that call her "Nora Exploradora". There are much worse things to be called, if you ask me. 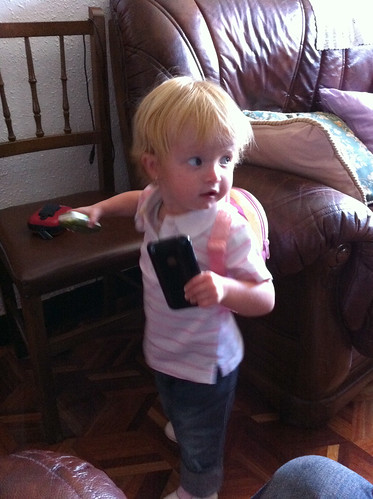 Notice the mischievous glance as she grabs both her mother's and grandmother's mobile phones. She wore her new backpack around the house for a good long while and only doffed it reluctantly. 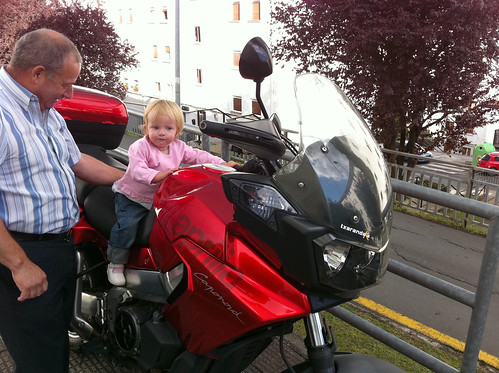 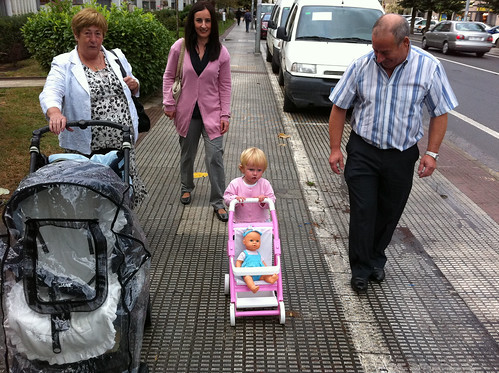 Out for a stroll. She's really loves pushing her toy stroller around. It does make for a slow pace on walks, though. This was the first time the toy stroller has been outside on the street. 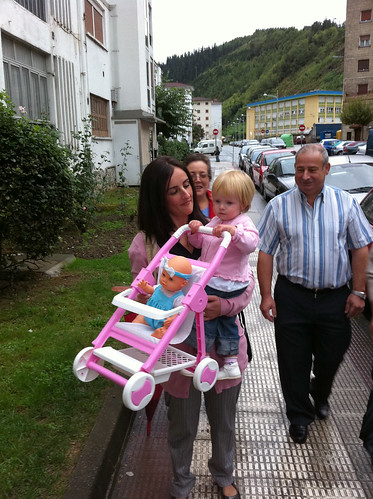 Of course pushing the stroller around is a lot easier if you can get someone to carry you and the stroller. 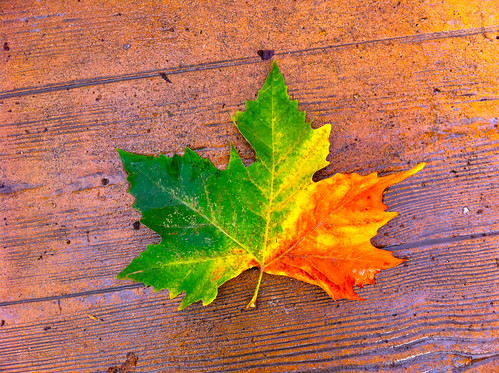 This maple leaf symbolizes what the weather is like now. The summer of 2010 is clearly a thing of the past. 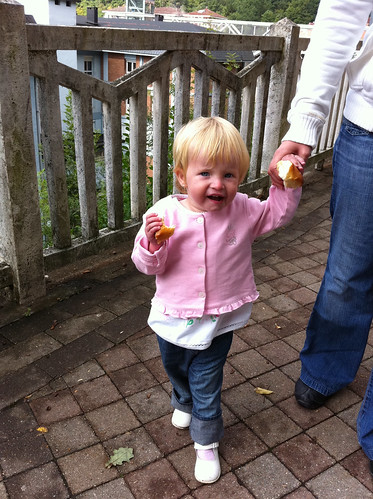 Nora slept only six of her normal eleven hours on Saturday night, so when she got cranky on Sunday morning, I took her out in her stroller, as it's the only way to get her to fall asleep sometimes. Later her mother joined me, and we went for a lovely morning walk, watching the town wake up. On the way home we stopped at a bakery and got a fresh sweet roll for Nora, which she loved. 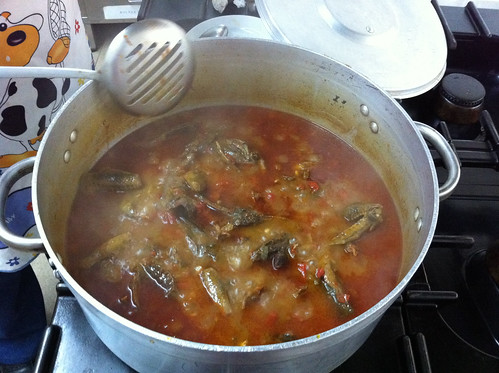 Pigeon stew. The sauce was WONDERFUL! It had just the right mix of spices to give it a little spicy aftertaste. Unfortunately the taste was muted once the rice was added to make the final product. I think they said there were six pigeons in this pot. 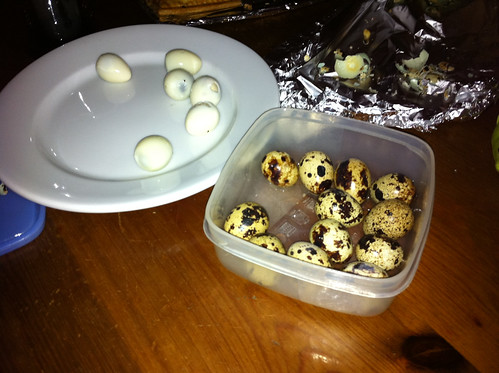 What else would you have with pigeon stew, but a salad with hardboiled quail eggs? 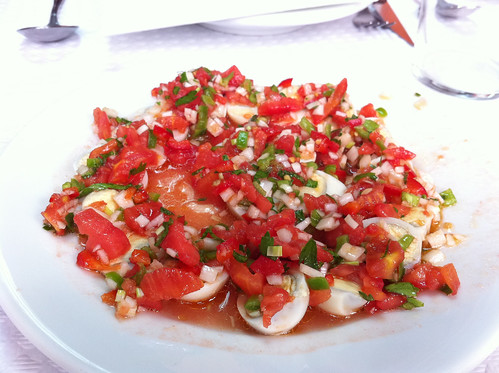 The quail egg salad was wonderful. It also contained finely chopped tomatoes, onions, green peppers, red peppers, and garlic. This was my favorite dish of the day. 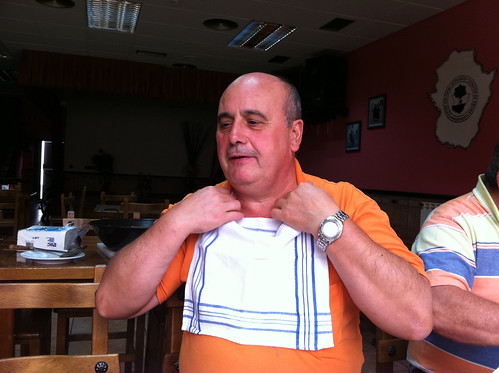 Alejo, the chef for the meal, showed Nora how to make a makeshift bib from a tea towel. 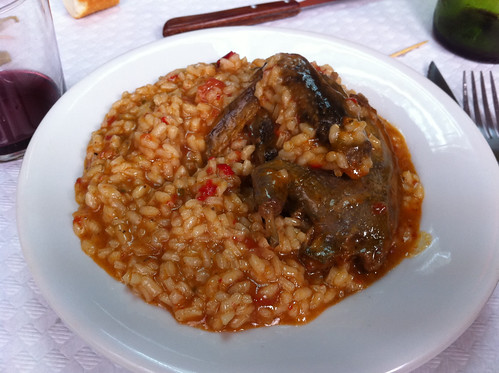 The final dish. Nothing like rice to stretch a meat dish to feed ten people. I had a half pigeon on my plate. Despite the "tastes like chicken" cliché, I'm going there: It was very similar to chicken, but with a darker, tougher meat. I suspect that it's close to what chickens tasted like before we began millennia of selective breeding to make them the delicious beasts they are today. 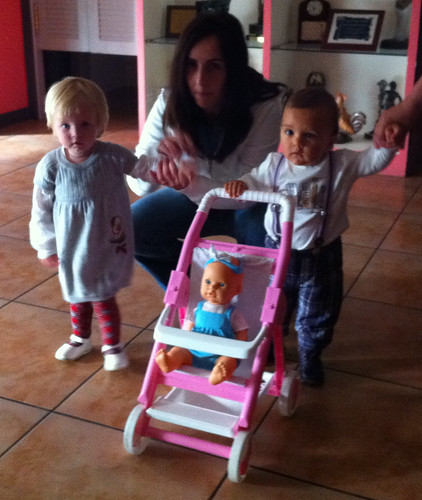 Nora sort of letting her cousin Chloé play with her stroller. Chloé is five (?) months younger than Nora, and five kilograms heavier. She's walking with a grownup's hand for balance, like Nora was for several long backbreaking months.

So there you have it. I ate a flying rat, with rice. Part of being an expat is trying new things almost all the time.