Nora is constantly eating. Upon waking in the morning, she complains nonstop while her breakfast formula bottle is prepared. After drinking 200 cc's of the milk and cereal mix in her bottle, she can sometimes make it an entire hour before asking for a cookie. She does this by first shouting "YETA!", which is how she says the Spanish word for cookie, galleta. Even though I know what she wants, I ignore her until she "switches to English" and shouts "DOH CHI!", which is her approximation of the word "cookie". What I mean when I say "cookie" is similar to what the British would call a biscuit, or, more specifically, a digestive biscuit. For my American audience, the closest equivalent might be a graham cracker. The leading household brand in Spain of these cookies is the Marbíº Dorada. 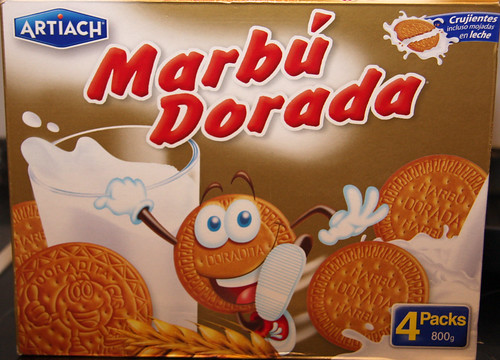 Marbíº Dorada is owned by Kraft Foods. This is a very typical part of the Spanish breakfast, which consists mainly of a cup of café con leche. 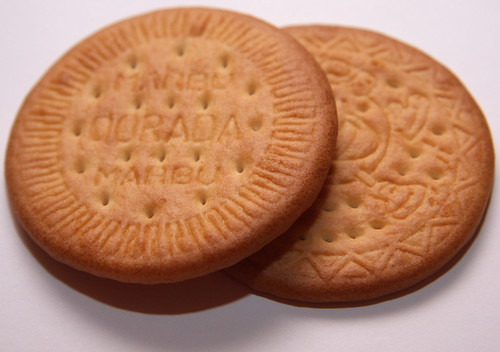 Once the last bite of cookie has been placed in her mouth and before it has been swallowed, she is asking for another. Occasionally she'll ask for some water, too. Personally I don't like these cookies very much specifically because they make me so thirsty. Once she and I are dressed and it's time to depart for our morning walk, I load up the little tupperware container in her stroller bag with additional cookies, and we head out. Sometimes the playground provides enough sensory stimuli to override her cookie-begging neurons, and we can go a half hour with no new cookies.

Then we head to the store, where the woman at the fresh fruit section, Tona, stops serving whatever customer she was helping to pull out a fresh ripe banana, peel it, and give it to Nora. This keeps her entertained while I buy the rest of the groceries. Now that she's walking, the colorful candy wrappers placed right at her eye level at the checkout counter are an irresistible temptation. Every day now I have to pry some candy eggs out of her hands and pick up a few more she's dropped on the floor. I have yet to buy her any of that crap.

Back at home with the groceries, I prepare her lunch, which is usually some sort of broth with either rice or small pasta added, or some lentil or bean soup. While the preparation is taking place, she's beside herself with impatience at not having anything to eat. Amazingly, she does eat between ten and twenty spoonfuls of the first course before she decides she's had enough.

Recently she's decided that the immobilization of the high chair during lunch is unacceptable, so the only way to get her to eat is to feed her while she's standing on the floor. While she chews and swallows, she runs off to play with something and I have to call her back for the next spoonful, which brings her running, mouth agape. Oftentimes she brings her toy stroller over and makes me "feed" the baby doll too, which, while cute, is an annoying distraction from the alimentary task at hand.

After she's stopped returning for more of the first course, I say, "Nora, would you like some yogurt?" She grins and shouts, "Chiiiiiiii!!" (Sí­) and points to the kitchen. I fetch the yogurt and she somehow still has room to down the entire contents of the single-serving yogurt container in the same manner, constantly running around.

Then we head out for the walk to daycare, which sometimes, depending on the time, includes a stop at a bar for Daddy to have a glass of wine. Of course whatever tapa (e.g. potato chips, olives, or a little mini-sandwich) comes with my wine must be shared with my companion. Sometimes she can even get other patrons to give her some of theirs, too.

About this time she's getting really cranky and demands to be held, so I pick her up and she falls asleep pretty quickly. I set her in her stroller and we go to daycare. For the past week or two, the only way I can put her in her stroller is if she's asleep. I push the darn thing around, with the hand that's not holding hers, on our walks mainly as a cookie carrying vehicle.

When she wakes up at daycare, she immediately begins asking for cookies. When other kids are having their afternoon snacks, she circles them like a vulture, and sometimes even manages to steal some of their food. She eats the fruit that her age group is given as well as a serving of the big sandwiches that the kids twice her age are given.

Before going to pick her up, her mother always checks with me about cookie supply levels in the tupperware container in her stroller bag, because as soon as she leaves daycare, it's cookie time. When she arrives home after a couple hours at the playground with her mother, she invariably has some kind of snack in her hand.

After her bath, she whines impatiently while her mother prepares her dinner. She's a big fan of fish, and often has a whole fillet of iridescent shark (or "striped catfish" if you want the less awesome name). If not fish, then an omelet or a hot dog or something. Often she eats the whole plateful.

Occasionally her full day of eating is bookended nicely with a bottle of the same milk and cereal mix that she has for breakfast. She never finishes the bottle, but we keep it in the fridge overnight for part of her breakfast.

Nora is still under the mean weight for her age, and her staple snack food is really rather healthy and firmly at the base of the food pyramid. It's not like she's gorging on Doritos and Twinkies all day. She just has the metabolism of a hummingbird. After talking it over with her mother, who is a scientist in the food industry, we've decided to be amused rather than concerned by our daughter's new dietary habits.

Stock tip: You might want to buy some Kraft Foods (KFT) stock, because, judging from our household, they're going to have a very profitable fourth quarter.