On September 29, 2010, there will be a general strike in Spain. This means that most workers in most industries will not go into work that day, and many will be picketing. Perhaps I'm too ignorant in the intricacies of labor economics, but this strike seems to me like a really, really stupid idea.

Strikes by workers in mines or factories make perfect sense to me. The workers are demonstrating how necessary they are, as the foundation of the organization, for the employer to make any money. Typically the workers have some grievances and some demands of their employer. Negotiation takes place, some demands are met, some are compromised, and the employees get back to work. I totally get that. I'm way more lefty than the average American when it comes to workers' rights.

But what about an entire country going on strike? 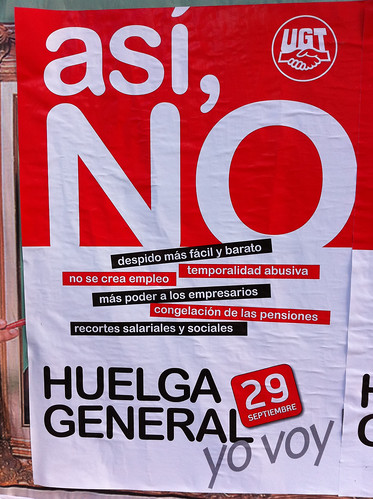 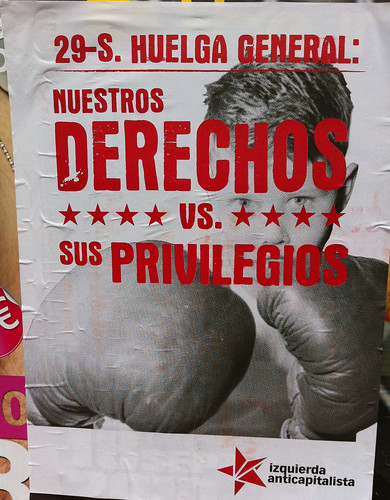 Some posters around town.

From the official 2010-09-29 general strike website, translated into English by yours truly. All bolding is theirs, hyperlinking is mine. Yes, there's a Charlie Chaplin YouTube video embedded in the manifesto.

Manifesto for a General Strike of workers, students and consumers on September 29, 2010

...against the violation of our fundamental rights.

...against the passivity of the principal workers' unions and associations.

...against the inefficiency, corruption, and populism of the political parties.

We. Students and workers, the best prepared generation in the history of Spain.

They taught us to get educated, to study hard, to compete and become excellent professionals without anyone giving us anything. Our parents encouraged us to do so. Their calloused hands, absent eyes, and exhausted bodies after each day were the best evidence they could give us to fight for a better life, a life in which being useful to society would reward us. There were many difficulties, many costs to cover, and tremendous time invested in our university studies, masters degrees, language courses, diplomas, unpaid internships, certificates, and driving licenses.

However we have been betrayed. Not by our parents who advised us what they thought best for us. Not by the studying that brought us so much personal satisfaction. But by those who monopolize key positions in the Spanish social pyramid. They treat us like expendable meat, offering us temporary jobs, miserable salaries and endless workdays irreconcilable with family life.

Companies are looking for talented youth, they say there's a labor shortage, and that the universities don't educate properly, that we're not productive. They lie. What there are are people that accept deplorable conditions. In the rest of Europe, they are treated like true professionals, receiving just treatment and salaries. The problem is in the fabric of Spanish business. And in the government that consents and does not regulate the situation.

Any protest filed against the administration and unions goes unheard. "Be entrepreneurs, start your own company," is the only response received. Yet all any young entrepreneur who does not base his business on the Spanish model of fat cat real estate, sand and sun finds are bureaucratic obstacles. We have no guarantees, the state gets practically half of what we earn and the numbers don't add up to pay for the place of business, vehicle or suppliers. The current system is designed so that an already established few continue accumulating wealth, instead of promoting the creation of middle classes from poorer families.

In times of economic boom, the profits stay in the pockets of a few, but in times of crisis, losses are socialized. The authorities have given a blank check to banks and large corporations, while the citizens are affected by unemployment, inflation and debt. The managers who have caused this crisis are rewarded and people who most suffer are marginalized. A public quality service is now more necessary than ever.

They call us "well off", but we can't buy a house or live by renting.

They call us "ill prepared", when they are the ones that occupy posts that exceed their capabilities.

They fear us. They depend on our talent and in the moment we rebel, we'll have the upper hand.

The objective of this call is to reclaim the government and the Spanish business network that meets the following conditions:

For the rights of current and future workers,

Okay, fine. You're pissed off, I get it. You were promised a better life than you found when you grew up. Welcome to the club.

It turns out that governing entire nations and macro economics are complicated. The banks can't just "pay for the crisis" without crippling the rest of the industries even more than they are now. Yes, more banking regulation needs to be in place, but I think that's true of every nation, and rest assured, bankers will always find loopholes.

Your minimum wage demands, however, are quite reasonable. For being as socialist as it is with medicine, pensions, and unemployment, Spain really shits all over the workforce. The same entrepreneurial spirit that causes middle class Americans to support ridiculous legislation favoring mega-corporations is also a boon to those that would prefer to be their own boss.

What the General Strike will accomplish

That's about it. It'll be like an average Sunday, but with more crime. And a government that is already short on funds to provide the services the strikers demand will be even more broke. Good job.

The reason policy makers won't be affected by this is that, unlike in the case of a factory or mine, the strikers aren't withholding something (their labor) the authorities need; they are withholding something we all need. Nothing would plummet a first world country into the third world faster than everyone deciding they weren't going to work anymore. That damages everyone! It's like getting angry and shooting yourself in the foot in protest; all you've done is worsened your condition.

What should be done instead

I'm sorry, but I don't have an answer for that. As much as I'd like to, I don't know to how to force sweeping national policy changes at a whim. The best solution, in my opinion, is peaceful demonstrations (which Spaniards already excel at), lots and lots and lots of peaceful demonstrations. Once your numbers get big enough – and there are millions that will swallow your manifesto – politicians will eventually pander to your voting demographic.

Shooting ourselves in the foot just gives us a limp.

UPDATE! Read how the strike really affected my life.