This past weekend we went to Zaragoza for a wedding. The groom was Marga's cousin, Manu, and the bride was named Irene, previously unknown to us. We left on Friday afternoon, stopping at a rest stop just before Haro, Rioja, for a half hour to meet up with my in-laws, so we could make the rest of the journey together. Marga spent five years at the University of Zaragoza, and she was excited to introduce me to the city. I took only my iPhone as a camera, which turned out to be very comfortable and really quite functional. The new-last-week built-in HDR feature is quite nice, although sometimes the difference is negligible (which good HDR should often be). 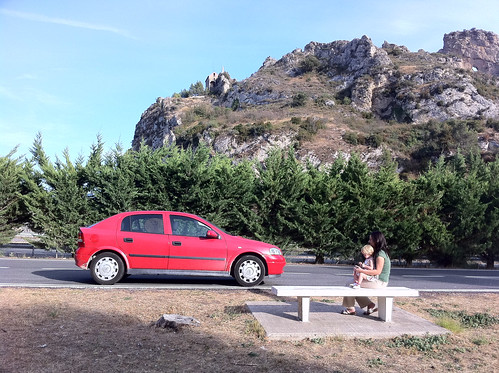 Waiting patiently by the side of the road, which happened to be under a rocky hill with a hermitage. 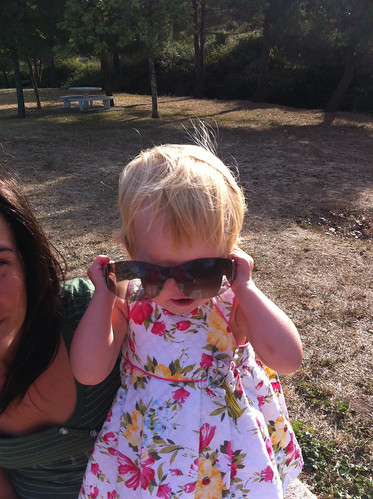 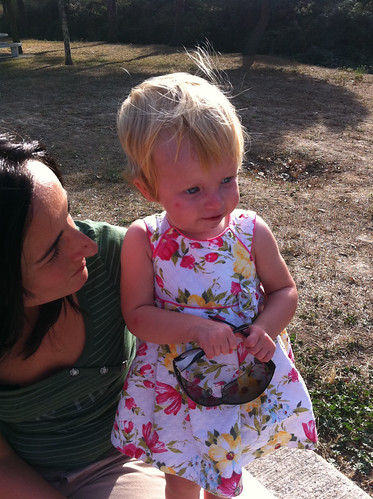 Last week Nora somehow got covered in bug bites, including two on her face (one on her nose and one on her cheek), which reached their bright red zenith right on the day of the wedding. 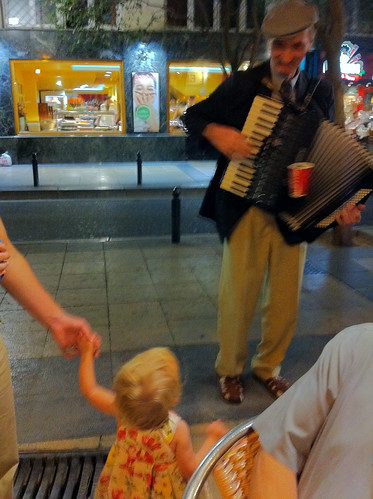 Upon arrival on Friday night, we met up with the whole family for dinner near the plaza. Nora was absolutely enchanted by an accordion playing street performer. 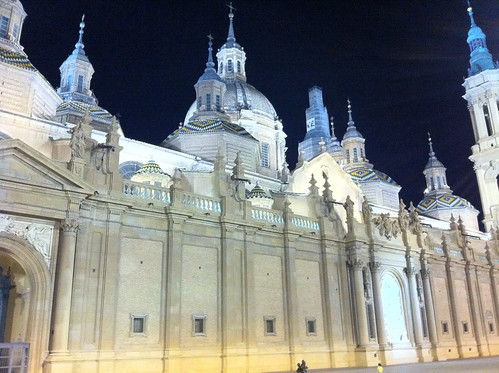 The church in the Plaza del Pilar was beautifully lit at night.

Marga had me set the alarm on my phone for 8:15 on Saturday morning so she could get up in time to go to the hairdresser (all Spanish women go to the hairdresser the morning they attend a wedding), but the monkey alarm went off at 7:00 sharp, and there was no snooze button. When I opened the curtains, I was treated to this lovely view over the Ebro River: 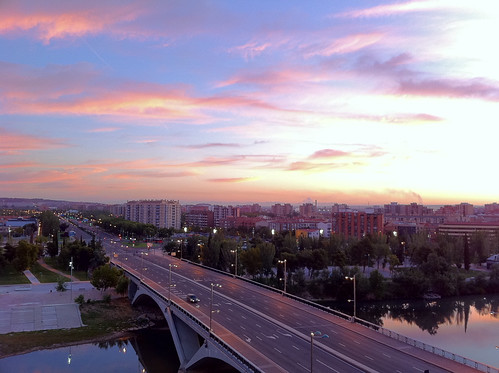 I did no post-processing on this photo at all. This is exactly how it was captured by the iPhone camera in HDR mode. 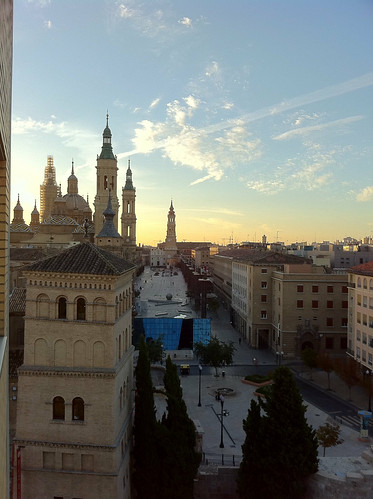 The view from our hotel was absolutely stunning, looking down to the Plaza del Pilar. Inside the church, there's a statue of the Virgin Mary that is one of the most famous in all of Spain. Every year, on my birthday (October 12), they pull her out into the center of the square and devout pilgrims line up for kilometers and kilometers to put flowers near it.

Quick plug: Over my years of travel in Spain, I have become quite a fan of the NH Hotel chain. They are right at my level of price and luxury, not the cheapest, not at all luxurious, but very clean and friendly and always very well located in the city. I've stayed in NH hotels in Barcelona, Madrid, Vigo, and Zaragoza and been pleased every time.

For lack of anything better to do, my father-in-law, Nora, and I walked with Marga and her mother down to the hairdresser. We went right to the place where Google Maps said it was, but found nothing but an empty street with closed shops. So I called the hairdresser, but got no answer. We looked around some more and I called again. As I was waiting to see if anyone would answer, I saw a woman scurrying to open the metal gate protecting her business, and when she flung it open, I realized why she was hurrying; there was a phone ringing inside. I told her to relax, that I was the one calling. 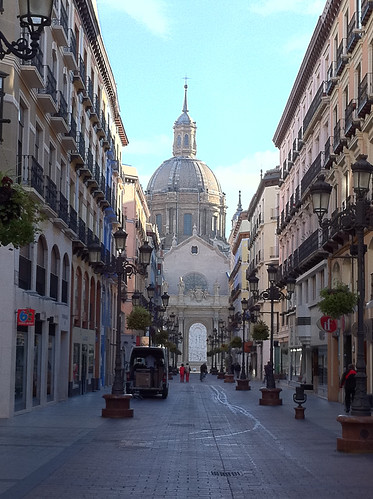 What a quintessentially European view: a wide pedestrian street with a domed cathedral-like structure on the horizon. 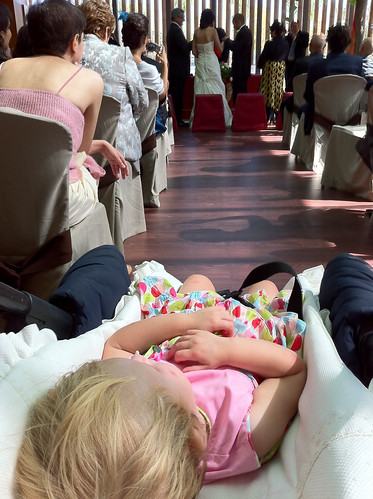 Having gotten up early, by the time we made it to the wedding ceremony, Nora was exhausted. We got there a little late, so we had to stand at the back. 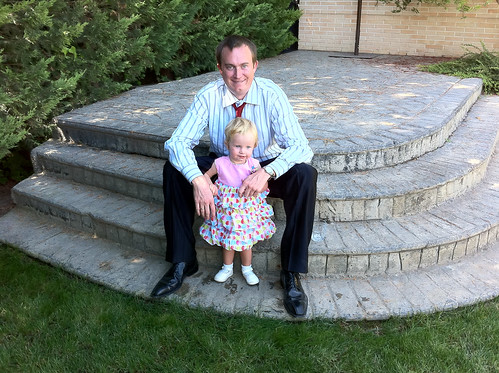 My daughter and I clean up rather nice, if I do say so myself. 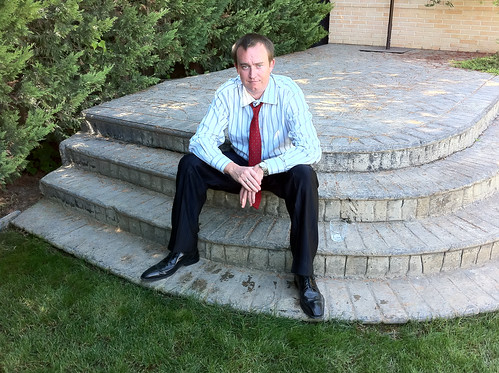 I could be a professional clown shoe model. Seriously, look at those things! They're twice as long as my feet. I got married in those shoes. 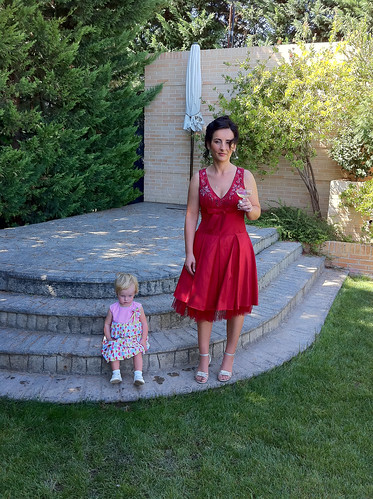 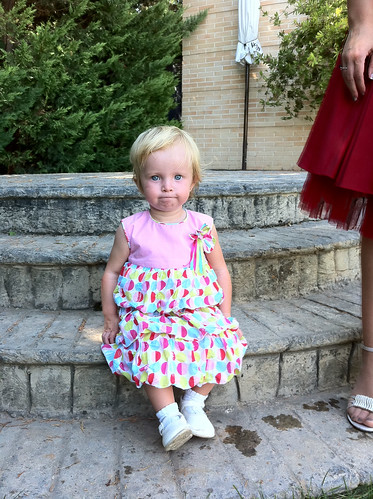 Cutie. Her favorite thing in the world right now is any set of stone steps she can sit on. And there are plenty of stone or concrete steps in Spain. 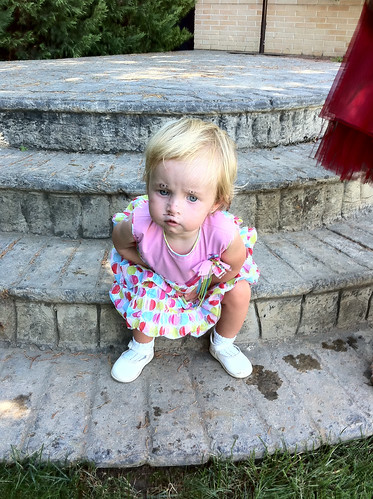 This hilarious image taught me an important lesson about using the HDR feature of my iPhone. Don't use it with moving subjects! Obviously, due to the nature of the HDR technique, it needs to take two quick photos back-to-back and then digitally merge them. So if your subject bobs her head, she comes out with eyeballs for eyebrows and a pencil-thin mustache. 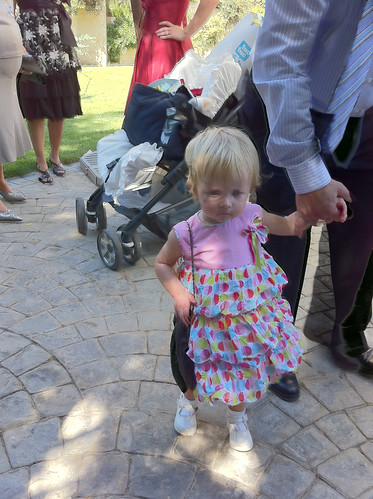 A lovely woman we met at the wedding named Monica, in the black skirt, couldn't get enough of Nora because she had made the decision to not bring her 18-month-old boy to the wedding and was missing him. So she let Nora parade around with her handbag, which Nora absolutely loved. 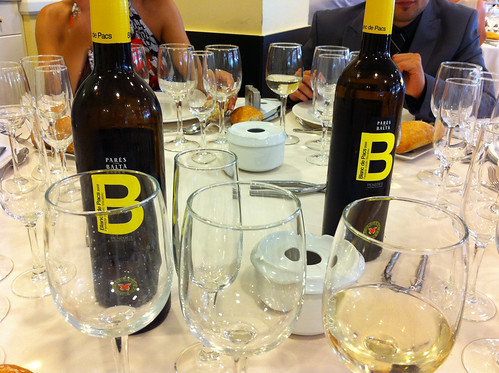 "They wouldn't spring for the 'A' wine," I quipped, but my joke was either too clever or too tasteless to be acknowledged by my tablemates.

As soon as the music for the post-meal dancing started, Nora fell promptly asleep, which I must say was very convenient.

Every time I hear this Spanish dance song, I think, "OH GOD! It's Achy Breaky Heart!!" Spanish pop music is full of such thefts. It's unfortunate that they took the line dance too. 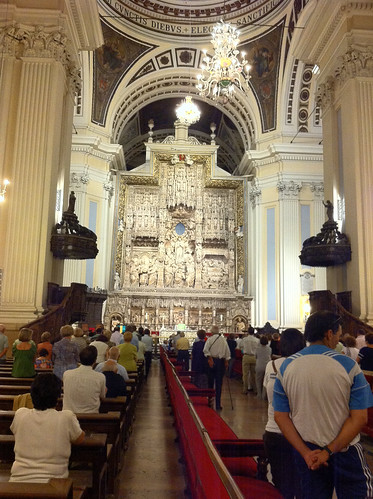 That evening we ventured inside the Basilica of Our Lady of the Pillar, but they were having mass. 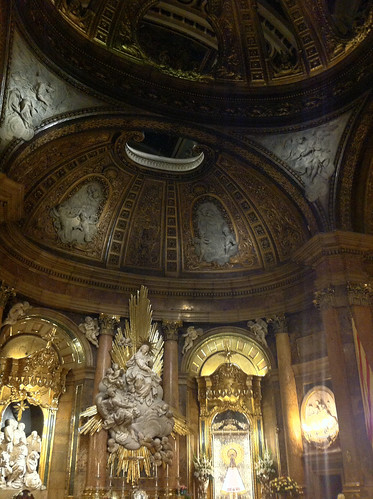 The virgin is actually quite small, the bright white thing to the center-right of bottom. 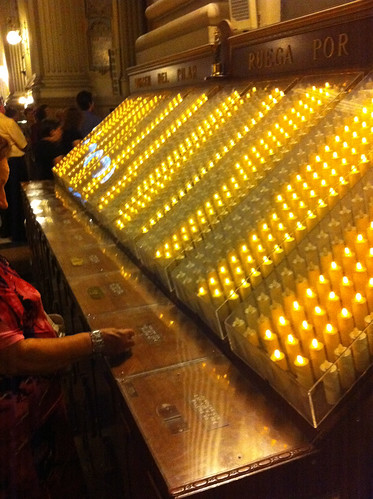 These prayer vending machines confuse the heck out of a godless chap like myself. Actual candles seem much more mystical and special to light when making a prayer. I get that. But little electric candles?? You put in a coin and a light goes on. Worst. Video game. Ever. 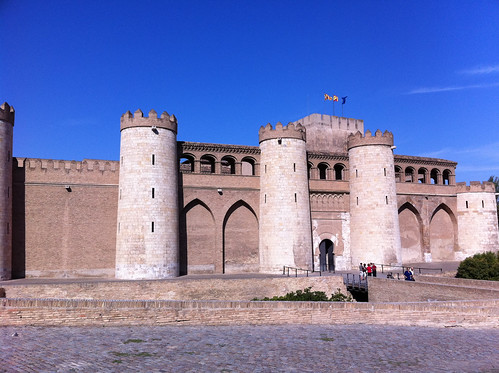 On Sunday, we took a walk around Zaragoza, including a stop at the Aljaferí­a Palace, built a millennium ago back when the Muslims were awesome. 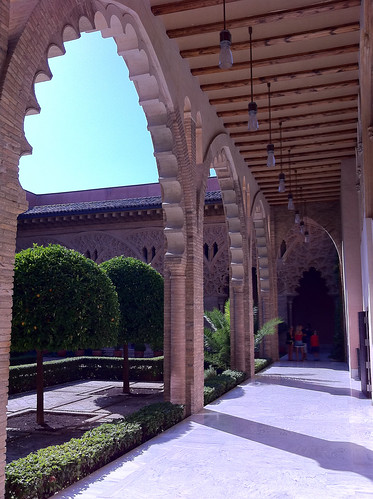 The weather and the palace were beautiful. The arabic open courtyard design has clear influences on even the most urban Spanish architecture. 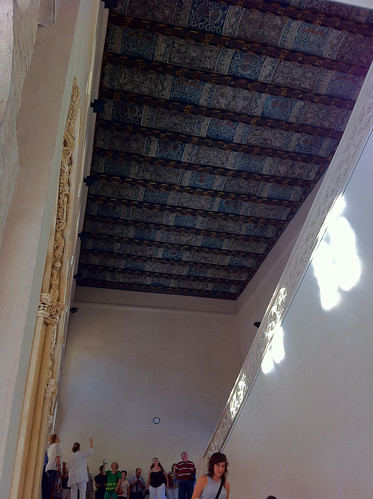 One of many gorgeous ceiling (fresco?) paintings. 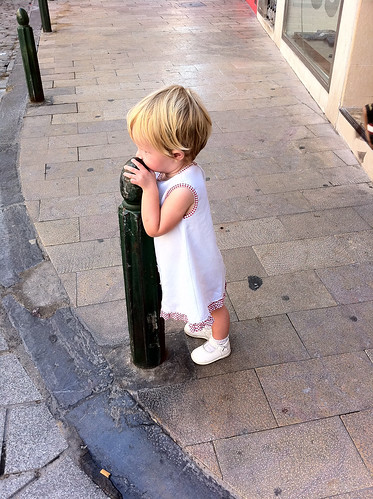 We had to wait for several minutes while Nora thoroughly kissed this bollard. 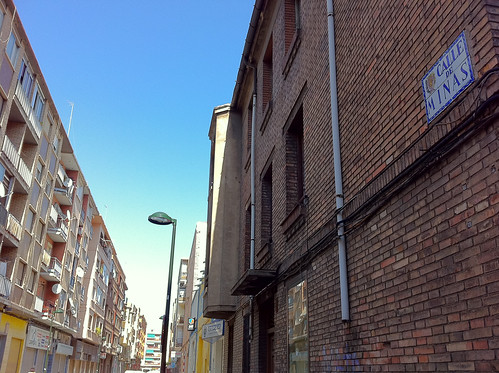 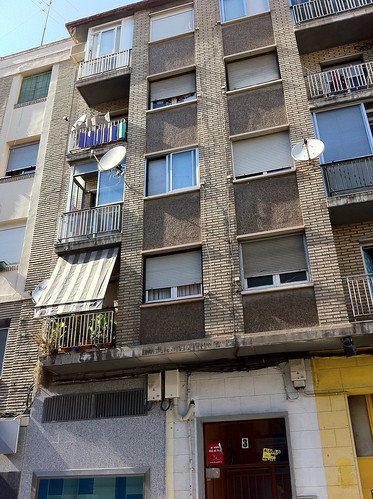 This is the apartment building Marga called home for five years (hers was on the top floor). She says a lot has changed in the eleven years since she left. 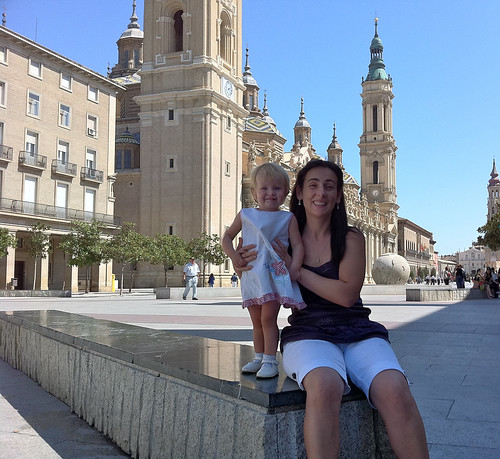 We had a great time visiting Zaragoza. It's a beautiful, clean, modern, yet historic, city. If it weren't infamous for having some of the most extreme temperatures in Spain, it would be a great place to live.