Taking full advantage of our temporary childlessness, my wife, sister-in-law and I had an exhausting weekend. After sending Nora on her way, we grabbed our swim suits and our always-prepared-this-time-of-year beach bag and drove the five minutes to Laredo's beach. We parked right at the midpoint of the five kilometer (3.1 mile) crescent-shaped beach and walked to the main town center on one of the beach, where we found a restaurant to have lunch. 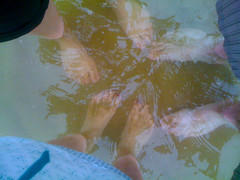 After lunch, the desire for siesta was strong, but we had to walk back to the car to get our beach towels, and the sky had clouded over, much to the chagrin of my companions. I suggested we take off our shoes and walk back in the surf, so we did. But when we reached the midpoint where the car was parked, we were enjoying the walk so much that we continued all the way to the tip, where we stopped for a coffee at the bar there. Heading back, the same thing happened, and we continued all the way back to the other end. On the third time passing the midpoint, we did stop to go home, though. That's a total of 15 km (9.3 miles), most of it in a foot of water. Once home, we got showered and dressed and called up our friend Agustí­n to see if he and his wife wanted to go out with us in Laredo that night. They didn't have plans at the time we called, but agreed to meet us within the hour (I love friends like that!). After some introductory beverages, we headed to our friend José Luis' restaurant for some grilled mushrooms, croquettes and a steak. Then it was out on the town until 3:00 AM.

At 10:00 AM Sunday morning, we were awoken by the local church bells. We had agreed to call Agustí­n at that time to decide where to meet at 10:30 so he could take us up to his mountain garden. He told us to go to a restaurant in neighboring town of Treto. We found him there standing next to his all-terrain vehicle, or quad, as it's called here. He took off and we followed him up into the mountains. At various places along the way he pulled over and told us about various towns and buildings in the distance.

Come with me, up to Agustí­n's vegetable garden!

Looking down to the valley town of Bádames. View larger. 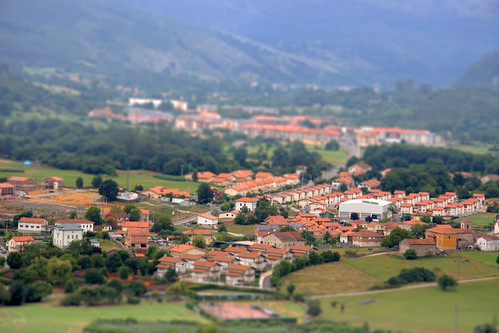 A closer look at the town center, slightly tilt-shifted. 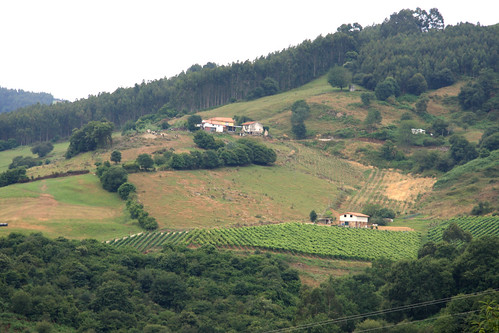 A mountain vinyard. He told us there is a white wine called Vidular that is quite good, but I'm not sure if this is the vinyard or if it was another one.

A gorgeous panorama overlooking Santoña, Colindres, and Laredo. Agustí­n says that on a clear day, you can see Santander. Worth viewing full size. You really get a sense of just how far we walked the day before. 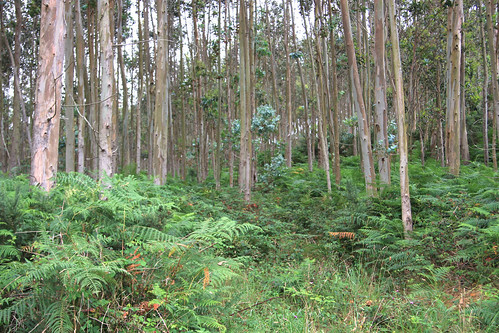 The forest is pretty dense. Most of it is eucalyptus trees for lumber. And ferns. Lots of ferns! 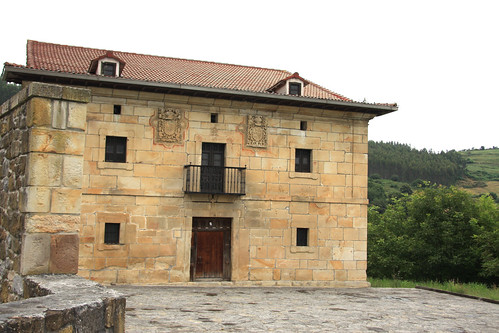 A nicely restored old house with beautiful coats of arms. "It's owned by some city slicker in Madrid," Agustí­n scoffs. 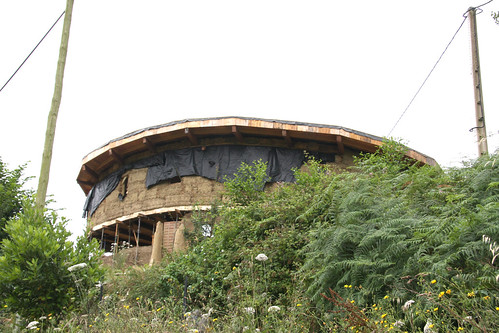 When we parked to walk up to his garden, we saw this strange round building that looked like it was being built with bails of hay. It sounds like someone missed the whole point of the story of the Three Little Pigs. "It's actually a project by an English chap," says Agustí­n, "He's building the house out of mud and straw." Fascinated, we wandered closer to get a better look, and sure enough, we heard some English being spoken. I felt a little self-conscious walking up to someone's construction project to ask for a tour, but before I could get up the courage, Agustí­n, ever the social ice breaker, shouted something, and the guy came out to talk to us, first in Spanish, but then I was introduced as American, and we chatted for a bit. The main builder, Robert Alcock, is from Leamington Spa, quite close to where we used to live in the English midlands. He says the project is called Abrazo House, and they get visitors from all over the world because of their website. To quote:

Abrazo House is an ecological house and study centre, now under construction in a small village in northern Spain. It is a two-storey passive solar building with load-bearing straw bale / cob walls.

We built the structure (foundation, walls and roof) between summer 2008 and autumn 2009. Now in spring 2010 we are starting to finish the house inside and out. 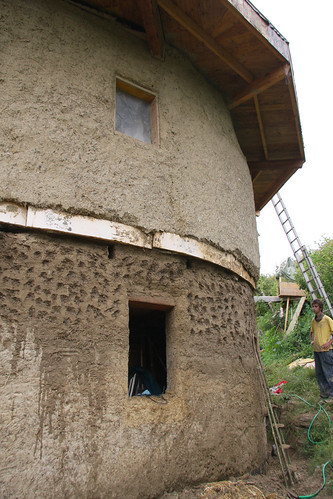 Pretty fascinating. You can't beat mud and volunteer labor for keeping you construction costs down, huh? Talk about dirt cheap! 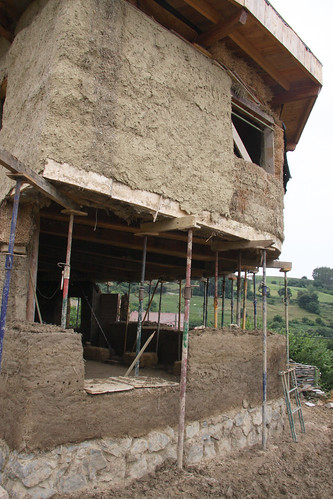 I can only assume that this is going to be a spectacular panoramic window. I'll have to remember to check back next year, because I'd love to see it completed!

We said goodbye to Robert and his two muddy volunteers and headed on our way. 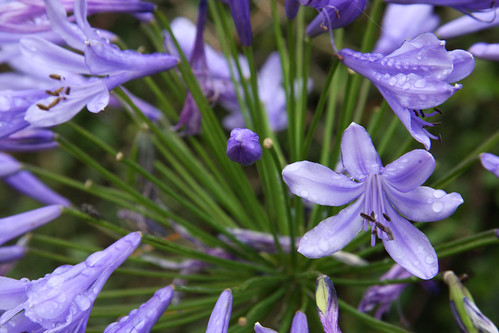 Some gorgeous purple flowers on the way up to Agustí­n's garden. His family owns a large bit of land on this mountain, most of which is rented out, but Agustí­n cares for a little bit of it, and has a small vegetable garden some sheep, and a couple donkeys. 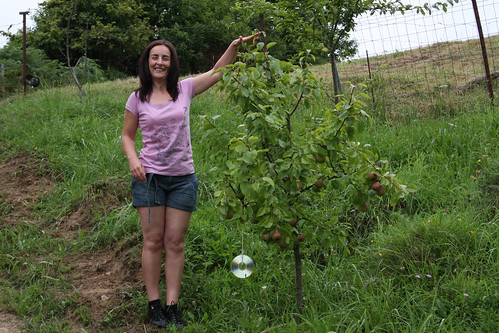 This was my first time going up there, but Marga had already been up there two years earlier, when she planted a pear tree. This is her standing proud next to her tree. The dangling CD is to keep birds away. 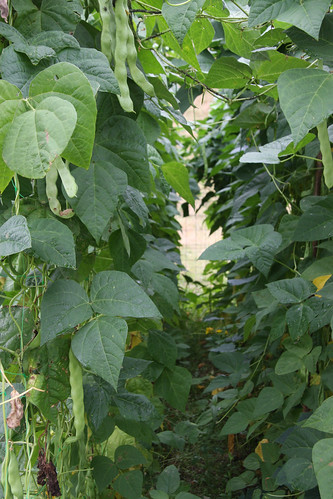 Agustí­n's green beans. He gave us about a kilo of them when we left. 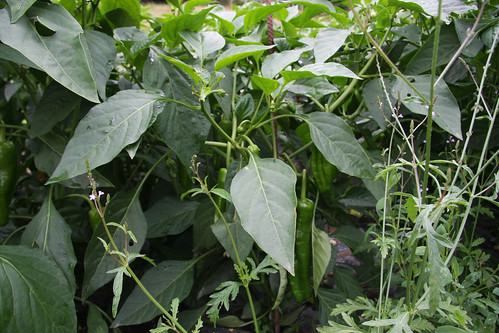 Green peppers, which he sells to our restauranteur friend, José Luis. 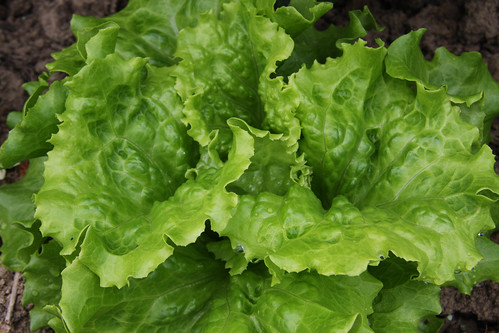 How gorgeous is that lettuce? Makes you want a salad, doesn't it? He gave us two heads, which we've been enjoying all week. 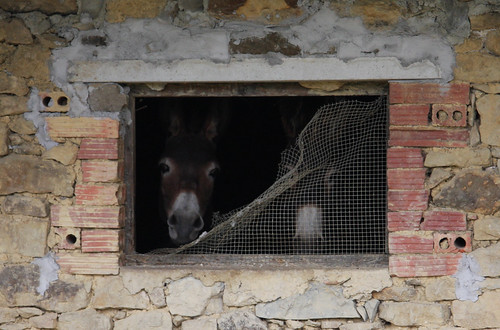 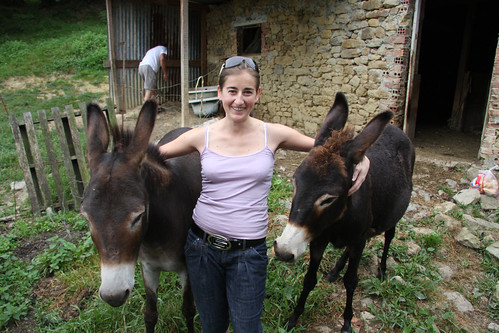 Belén really loves donkeys. And these were some of the most docile, sweet donkeys I've ever seen, although I haven't seen many. 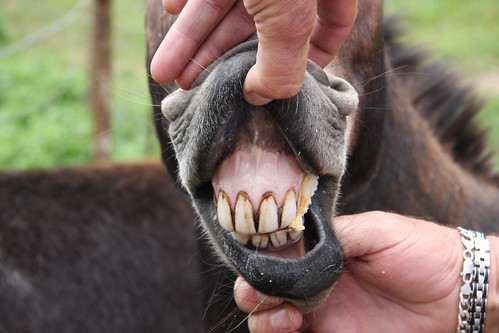 Smile for the camera! They love bread, which we were feeding them. 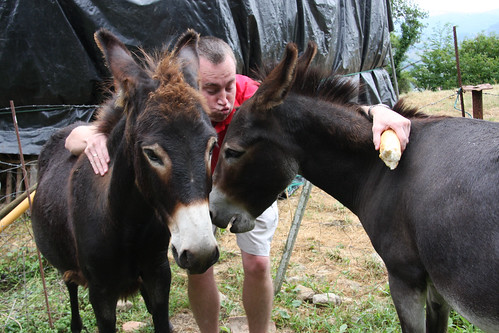 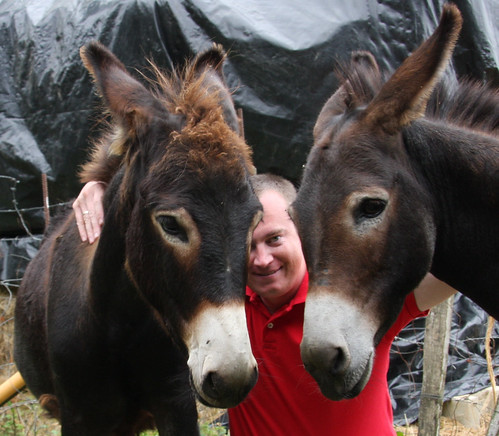 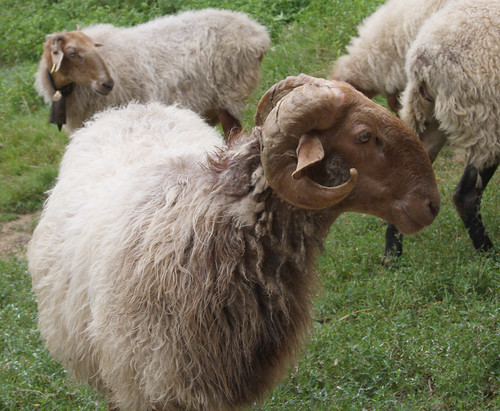 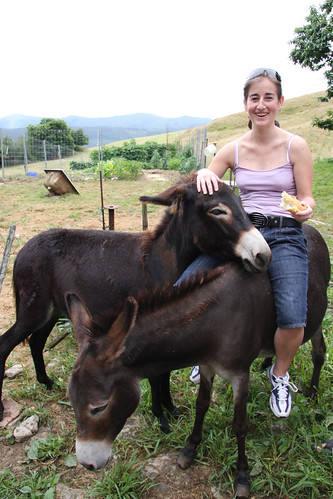 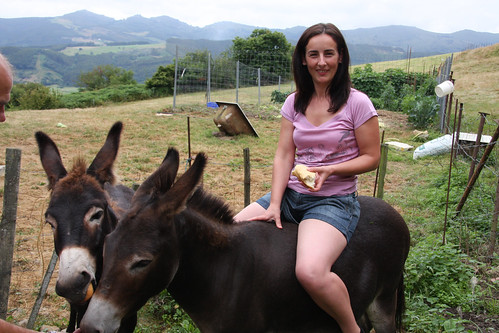 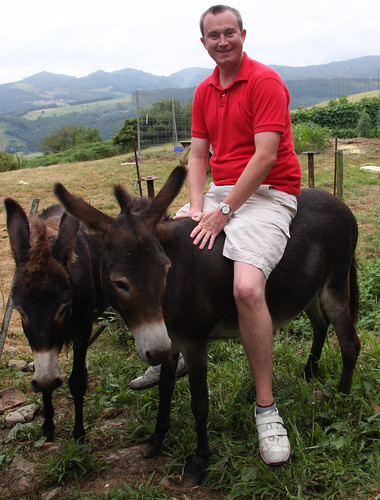 My feet almost reached the ground. 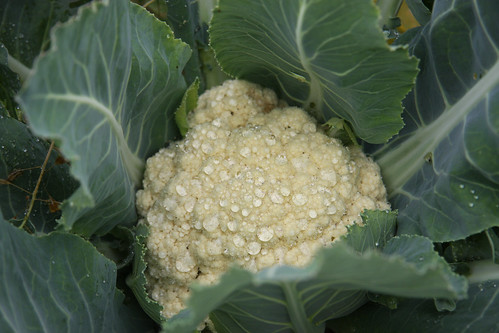 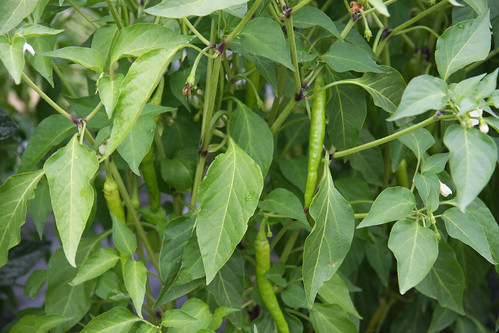 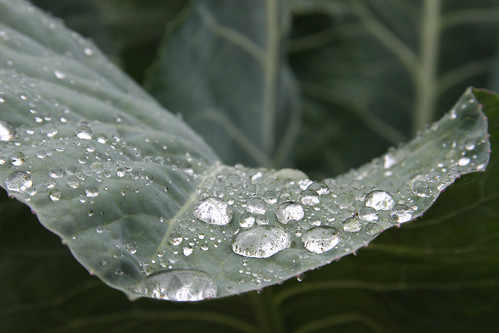 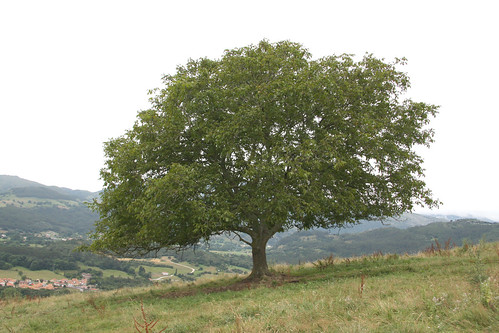 This tree is sort of the ideal archetype of a tree. When a children draw a tree, this is what they draw. What fascinated me was how the branches follow the slope of the hill it's on, always staying a certain height above the ground. Amazing.

Soon it was time to go. We drove down into Bádames for a beer and some olives. On the way back down the mountain to Colindres, I volunteered to ride with him on Agustí­n's quad. I've never been on a motorcycle or a quad, so it was a new experience for me. The last time I had that much wind in my face, I was standing up in a jeep in Venezuela! It was good fun.

For lunch we tried Agustí­n's recipe of fried green beans, which was delicious! I took a short nap until it was time to take Belén to the bus stop, and then a longer nap after I got back. Later on Sunday evening we drove into Santander to see Marga's boss in the hospital. Santander is currently celebrating its annual Santiago festival, so we had to have some tapas and wine after our visit to the hospital. 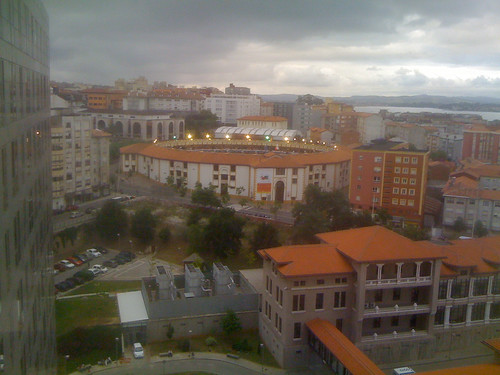 The new hospital is nice, and there are no fewer than five cranes working to build the rest of it. From the ninth floor, there was a great view down to the bullring, which was hosting a bullfight. The bullfighters probably recognize the convenient juxtaposition of the bullring and the hospital. See the door by those parked cars that must lead to a tunnel to the bullring? Clever.

I hope you enjoyed our journey into the Cantabrian countryside. We sure did. ¡Muchas gracias, Agustí­n!