I'm pretty sure that I will never understand clothing fashion. It seems to be a futile conundrum of combining the desire to be like everyone else with the desire to be unique. But then I don't get a lot of social customs. Every once in a while, however, a new style comes along that makes me think, "Wow, you are going to be so embarrassed in ten years to look back at photos of yourself wearing that!" In the last five summers in Spain, there has been an explosion in the popularity of capri pants, called "pirate pants" here, that I have successfully avoided. C'mon, people! Having trousers that stop at your calves is a ridiculous idea.

It was about one year ago, last August, that my wife showed me some new trousers she had bought. They seemed to me to be the most ridiculous thing ever, and I was unable to stop from laughing at the idea that someone would wear them. I'm not sure if I hurt her feelings or what, but she ended up giving them to her sister. The only way I could think to describe them is with the term "Aladdin pants". Some googling, in preparation for this post, has revealed that they are actually called that! Perhaps the correct term is harem pants? Much to my chagrin, they are huge this summer. 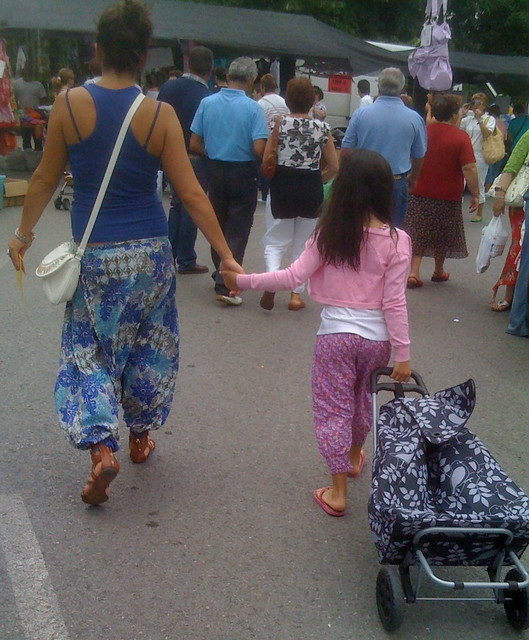 This is a photo of mother and daughter both sporting said trousers I snapped in the local market.

Please, oh please, let them remain in the realm of women's fashion. Back away, M.C. Hammer! Now if only I had a genie so I could wish this style out of existence. It'll be gone soon enough, I suppose.