by erikrasmussen, on Flickr")Nora was exceedingly well behaved this morning. When she woke up at 6:47 AM with a mild cry, I got up and explained to her that, due to the slight tilt of the Earth's rotational axis in relation to its orbital plane, we have a season, summer, in which the sun comes up very early and sets very late, and that just because the sun was already up and that Mommy had just left for work, it was, in fact, according to the definitions set forth in the household rulebook, still officially Night Time and that she should go back to sleep. She and I both went back to bed until 9:00 AM.

I carried her downstairs, put on her shoes – good traction is very important at this stage of her ambulatory development – and left her in the living room to play with some toys while I went to the kitchen to prepare her morning bottle and orange juice. Before the 45 seconds on the microwave were up, she had crawled into the kitchen with me. Soon I had her breakfast ready and we returned to the sofa for alimentary administration. She's really been enjoying drinking from a glass lately, and she's a big fan of freshly squeezed orange juice, despite the most adorable involuntary lip pucker it induces. We sat there calmly watching an episode of the original The Avengers, as she sipped her breakfast. She knows how to drink from her bottle on her own now, so she sat with it in her lap sipping occasionally until it was mostly gone. A few times I tried to take it away and was scolded for my haste.

Nora is just now at the age when she can be left alone safely again. When she was little and couldn't crawl, you could just leave her somewhere on the floor and come back a few minutes later and there she'd be, pinned down by Newton's First Law of Motion. Now she can stand up and walk to nearby furniture fairly safely. So I was able to leave her playing with some toys and have a shower and shave. Then it was upstairs to dress her in a fine dress that was a little long last year and is a little short this year. She doesn't mind getting sunscreen put on her legs, but when I put it on her arms, neck, and face, she screams in annoyance, the only time she came close to crying all morning.

Soon it was time for a walk, so I strapped her in her stroller and we both donned our shades and hit the road, heading for the fishing port about a kilometer away. She left her glasses on, which she often doesn't tolerate, and about halfway there she was dozing. She slept for a full hour, allowing me to get in a full hour of seaside exercise, working on my suntan and love handles. An hour later, we sat down at a cafe for a quick rest in the shade and a beer. This is when Nora woke up, and rather than beg for a cookie, as she often does, she was content to play with my iPhone earphone cord while I finished my beer and read a few virtual pages on her iPad.

Then it was off to one of the local baby stores, where we had purchased a dress and a stairway gate – to keep you-know-who from climbing the stairs – on Saturday. When we bought the items, the lady said, without taking any names or information from us, "Go ahead and try it out and you can pay me sometime next week." Wow. Small town perks! While I was there to pay for the items, I noticed a hat that I thought might look good on Nora. If baby hat sizes are any basis for judgement, Nora's head is enormous, because they are almost all too small. But this one had a bit of elastic at the back, and a few other features I liked, so I threw it in with the previous purchase.

With her hat on, we we headed to the swing set at the park. I'm not sure what it is about swinging, but little kids can't seem to get enough of it. After fifteen minutes or so, she let me know with a few grunts when it was time to get off the swings, and she made a beeline for the slide. She loves to walk up the slide (with strong support from a parent) and then slide down, even though she's not very good at keeping her shoes from catching on the sides. A little six-year-old girl, named Lucia, was there playing and enjoyed showing off all the things she knew how to do on the playground. Nora enjoyed watching. In fact, Nora refused to leave until Lucia's grandmother made Lucia leave, and then we could go. 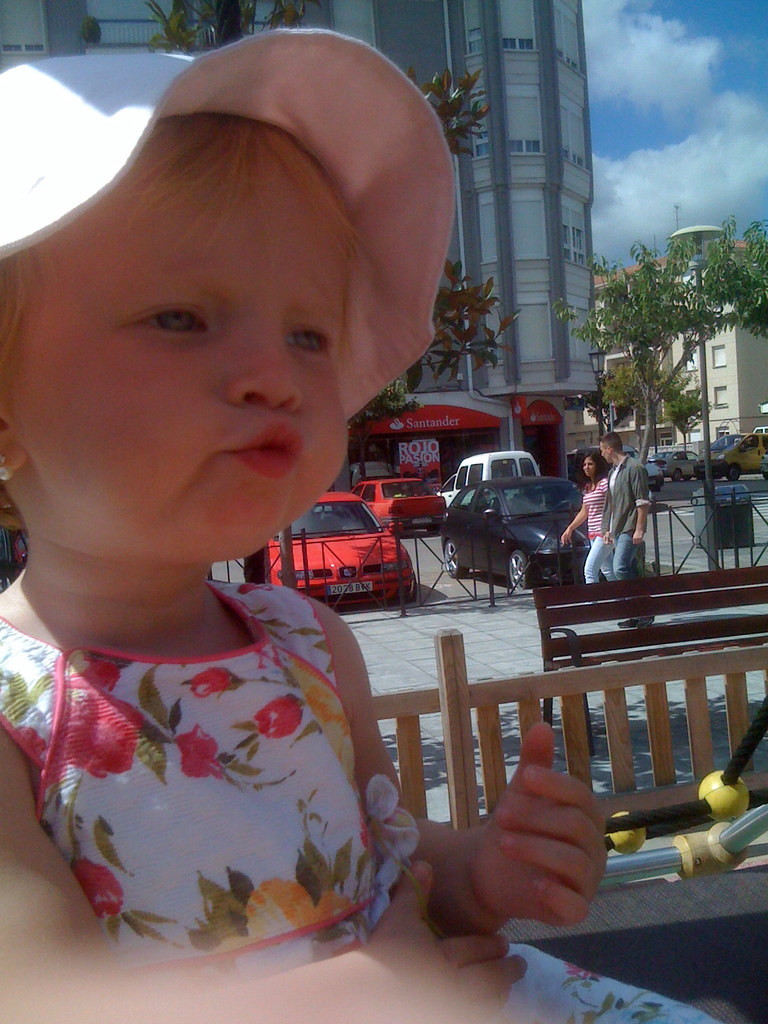 With her new hat, sitting atop the playground slide platform.

At the grocery store she was fairly friendly as the swarm of middle-aged housewives admired her in her new hat. As usual, one of them gave her a piece of bread, and then they all watched nervously as she stuffed piece after piece into her mouth. Shopping done, we headed home to prepare some soup for Nora.

We had thawed some chicken broth from a week ago overnight and I heated it up with some little round pasta balls that Nora likes. She ate her entire plate, which she often doesn't do. Something tells me that not having her 3-4 morning cookies today made a difference. A few minutes of playtime while Daddy cleaned up from lunch, and it was off to daycare, where she trotted happily into the playroom, and only cried a bit when the daycare worker plucked her from my hand. All in all, it was a wonderful morning of parenting. They aren't all this nice, so it's important to enjoy and remember the good days. 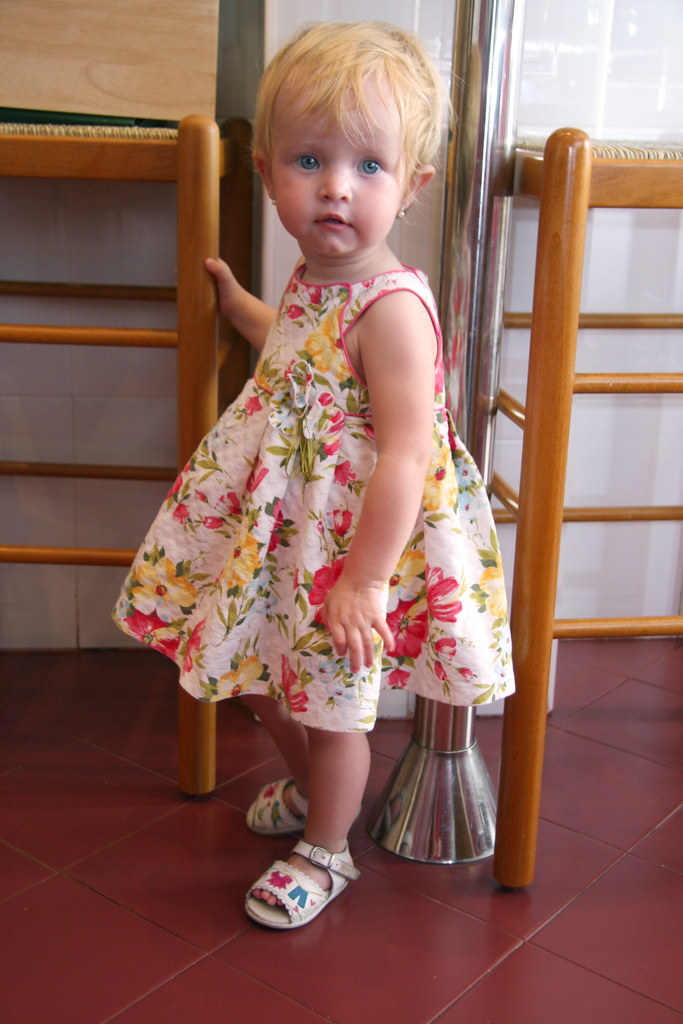 Looking fabulous, waiting for lunch to be prepared. My little angel.