We began World Cup final Sunday evening by heading to nearby Laredo, where we'd heard there might be a big screen set up on the beach. We were certain that we couldn't take a 15.5 month old child to an enclosed space with Spanish fans because she'd die of fright from all the screams. We discovered that the beach screen was only a rumor, and the real big screen was in the old town hall square. We took one look at how packed the square was with people and turned around and headed back towards Colindres, but not before spotting a group of old ladies wearing red-yellow-red striped headbands singing A Por Ellos.

Once back in our home town, we chose our favorite soccer-viewing bar, El Vapor (The Steam), which is only about two hundred meters from our house. The twin brother of our friend with the restaurant in Laredo was already seated at a prime table, and he informed us that he was leaving before the game began and promised us his table. We would spend the game outside on the sidewalk looking into the bar through the glass to a projected screen. And it was a good thing we were outside, because, well, let's just say that inside the bar, it lived up to its name. 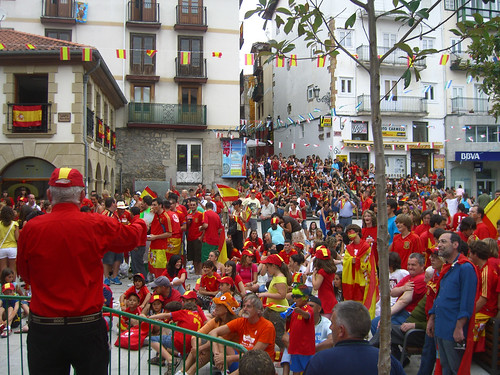 The old town hall square in Laredo, with 90 minutes left until kickoff.

The game was exciting from the very beginning. And I soon discovered that, due to the slope of the sidewalk away from the bar, I had to stand up to see the screen. No problem. I can stand up for 90 minutes. I admit to being nervous the entire game. So nervous, that the beer and snacks I had bought streamed steadily down my soar-from-screaming gullet.

Nora had a good time, as well. Her primary daycare caretaker, Nella, was also at the bar. She's so wonderfully selfless that she spent most of the time when the game wasn't on, the hour beforehand and halftime, playing with Nora. Nora also spent most of the match calming her nerves with snackfood, little mostly-air corn puff things the Spanish call gusanitos, or "little worms".

In the second part of overtime, I took exhausted Nora from her mother to give the latter a break, and we watched the game projected, from the bar, onto the side of a nearby building. The outdoor projection had just then become visible with the sun going down at 10:30 PM. Soon, Marga came up and took Nora, accusing me of bouncing the poor exhausted thing around, possibly singing A Por Ellos. I was excited, what can I say? When the goal occurred soon after, in minute 116, the place went WILD!!! Screaming, shouting, horn blowing, jumping, hugging... And we were in a fairly low population venue. I can only imagine what it must have been like in Laredo...nevermind Madrid!

During the blur that was the last four minutes after Iniesta's goal, during my dancing around with the Spanish flag as a cape (Which really keeps in a lot of heat! Good to remember in case I ever find myself homeless), some blond teenagers walked up and began talking to me in English. They were some boy scouts from Belgium that were camping nearby and were hitchhiking to Laredo for the big party. It was a strangely surreal encounter.

A good time was had by all, but after the game parental duties dictated that we not partake in the enormous nationwide fiesta, so we headed home and I put Nora to bed and Marga and I watched some of the post-game coverage by the ecstatic Spanish news team. It was a shame that Puyol and Xavi would ruin such a wonderfully uniting national moment by parading around the Catalonian flag instead of the Spanish one, but such is the separatist nature of Spain. At least captain and goalkeeper, Iker Casillas, got in a good on-live-television I-can't-help-myself kiss with his gorgeous sports reporter girlfriend, Sara Carbonero.

Spain currently holds the European Cup, the World Cup, the Tour de France, the French Open, and Wimbledon. Some Spaniards like to claim the NBA Championship because of Pau Gasol as well, but that seems like a bit of a stretch. Spain dominates in Formula 1 and Moto GP as well. No one can deny that this is a good time for Spanish sport. 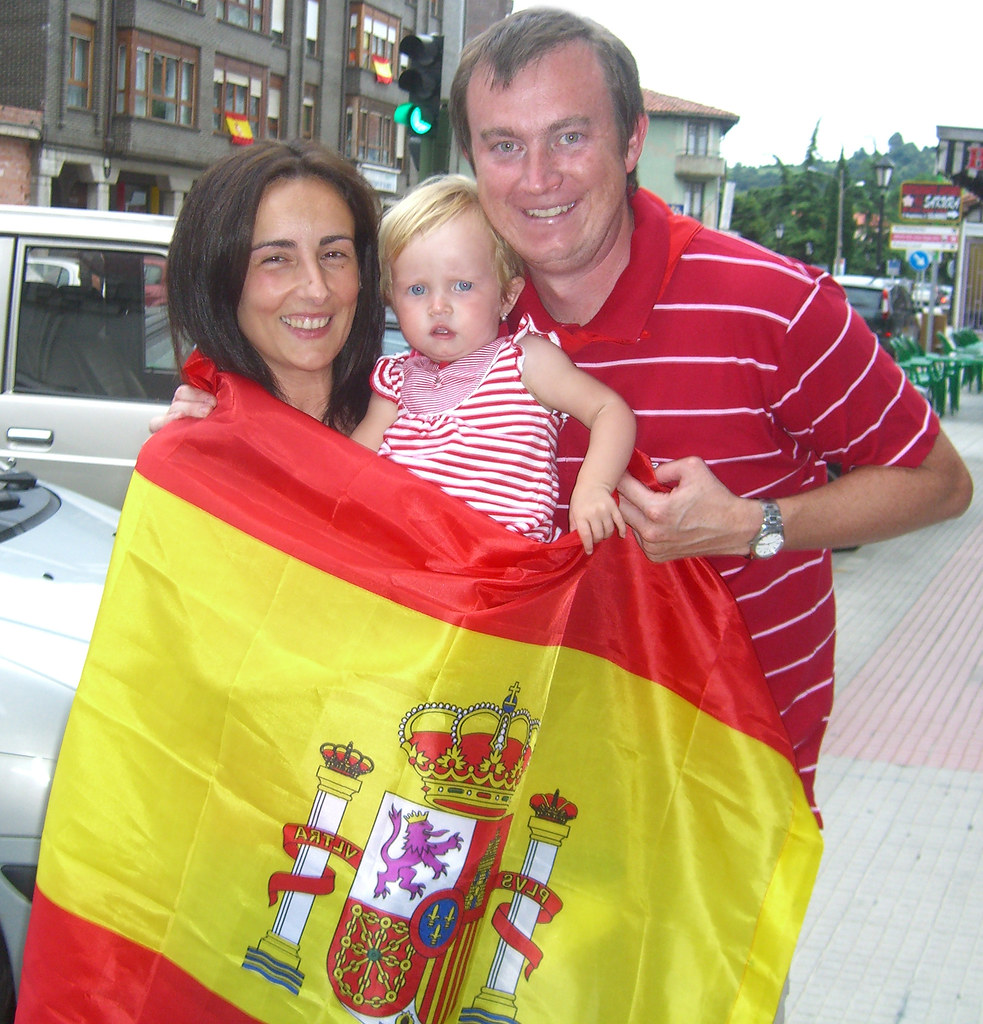 Spain fans. It really is too bad that Nora won't remember this.