Today is San Juan, a pagan-made-christian solstice holiday involving bonfires and general merriment. Since Saint John the Baptist is the patron saint of Colindres, it's a holiday for the town, including Marga's work and Nora's daycare. The weather today is absolutely superb, 24Â°C with a cool breeze, so we decided to head to the beach and watch Nora play for the first time (almost) in the sand. And there's no sand better than that of the beach in Laredo. 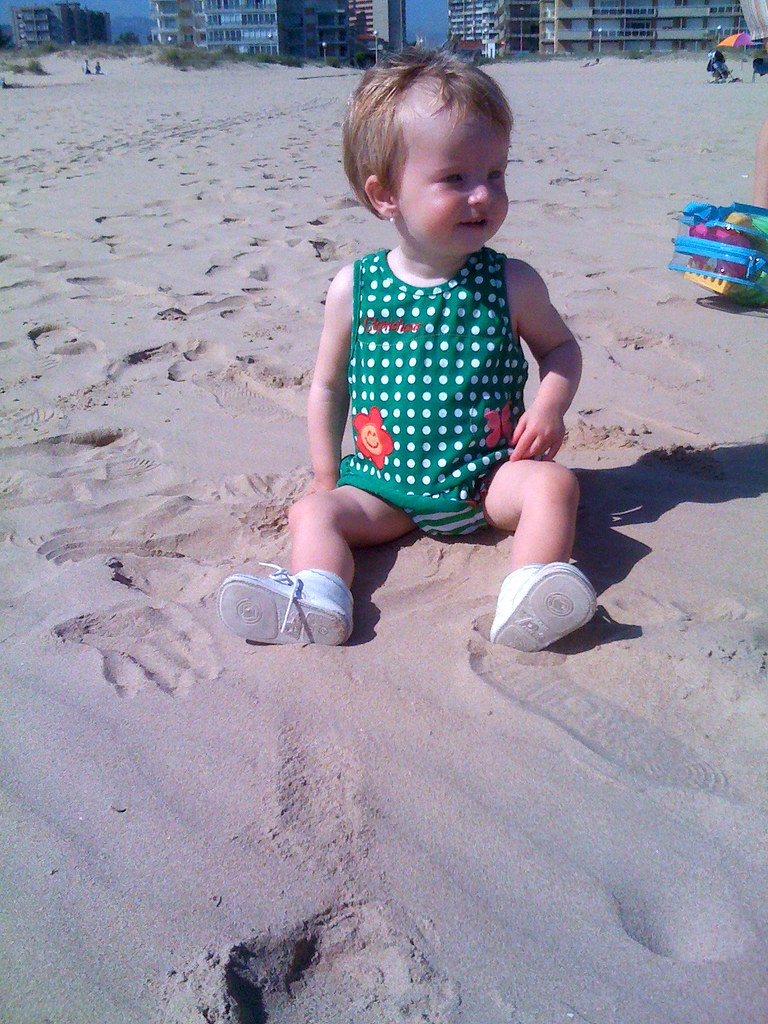 On arrival she still had her beach shirt on. 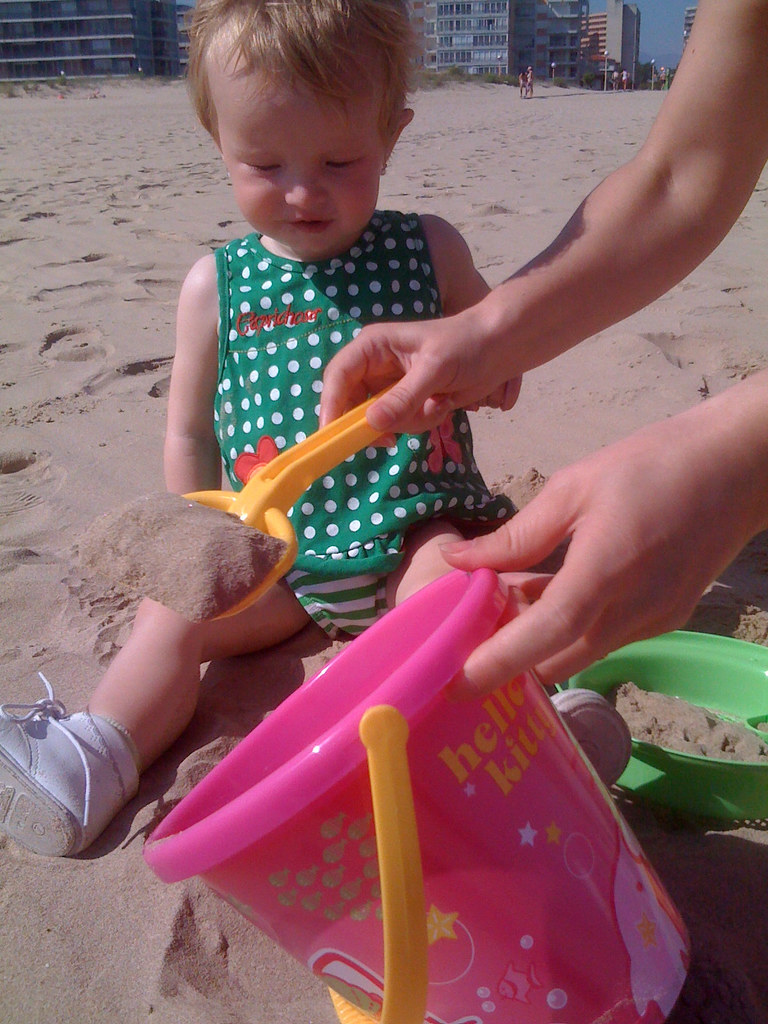 Her mother explains how shovels and buckets work. 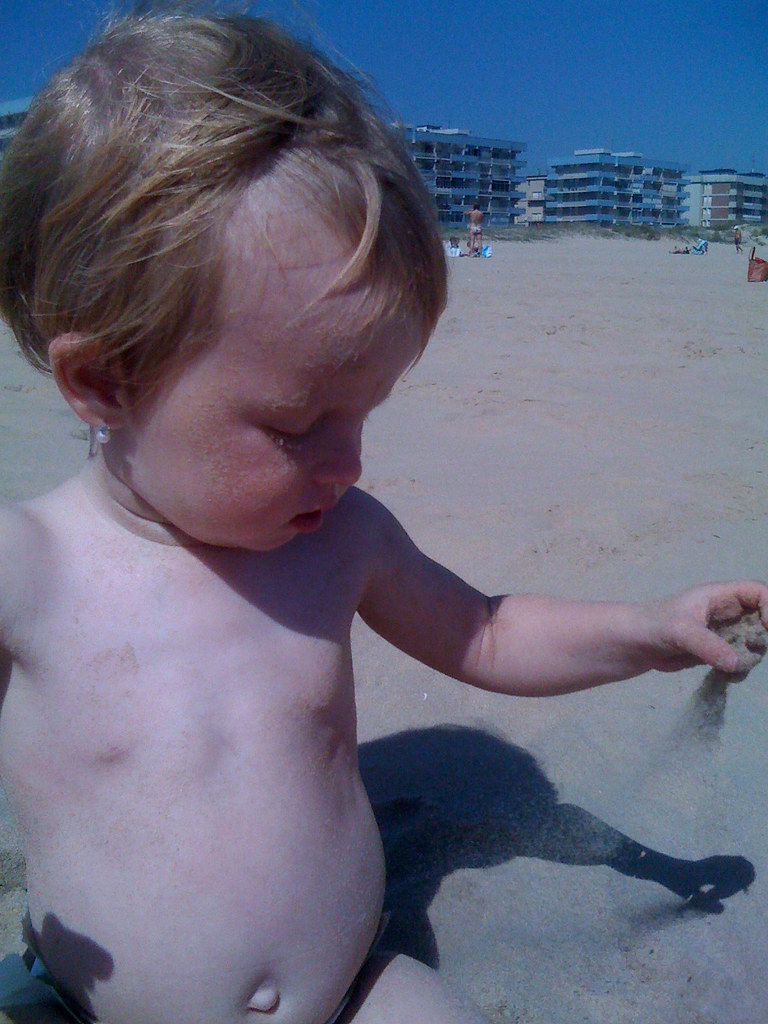 Sand on her face, eyelids, hair and torso. She was in total rapture picking up sand and letting it fall through her fingers. She must have done that motion a couple hundred times.

And we had to constantly tell her to stop eating the sand. In her defense, however, the shovel does look a lot like a spoon. 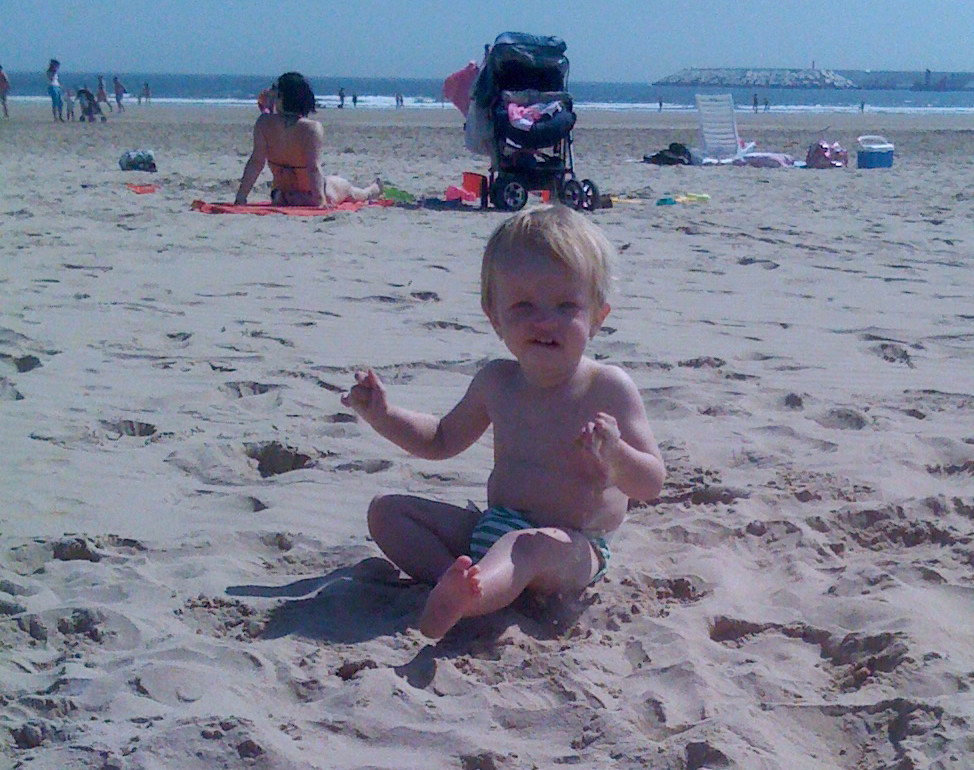 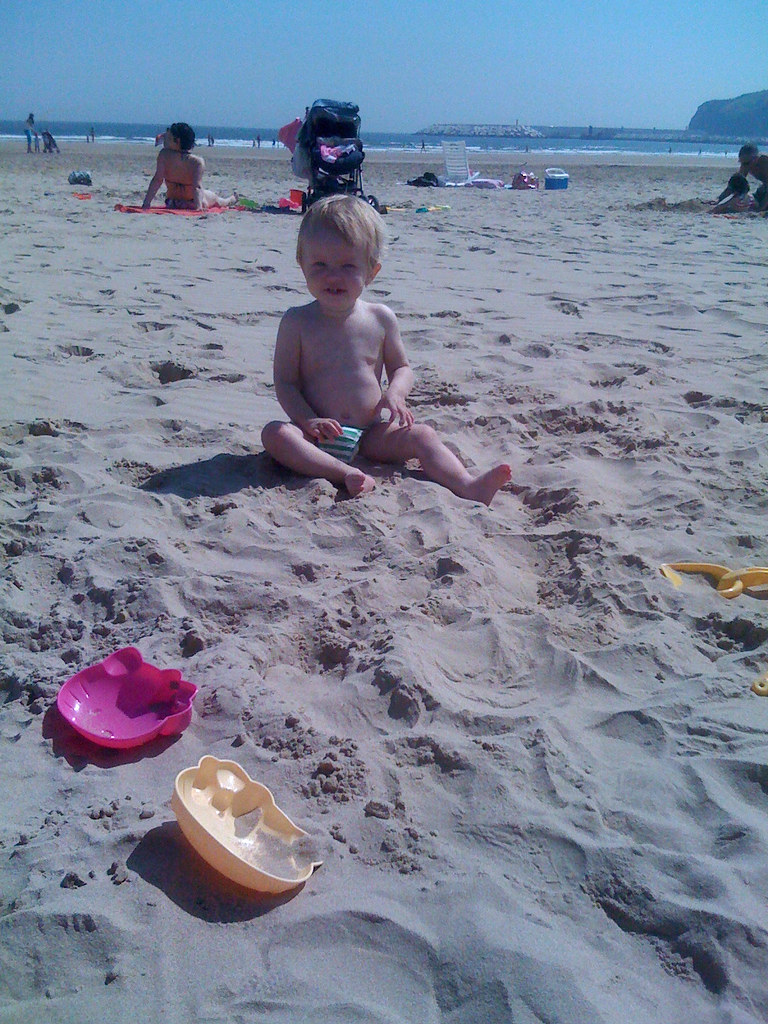 Her Hello Kitty beach toys in the foreground courtesy of her Spanish grandmother. 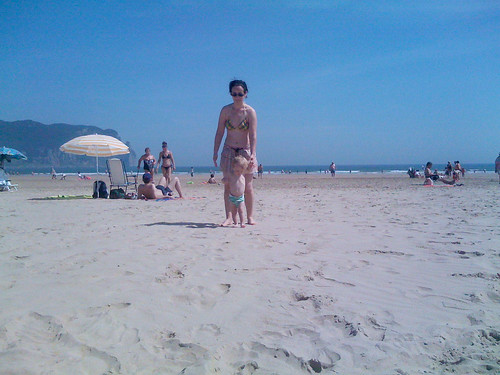 She spent over an hour absolutely refusing to stand up because she was so enamored by the sandy surface and didn't want to be that far away from it. But eventually she did walk around with her mother.

There was a group of three five-year-old girls playing nearby, one of which was also named Nora. This confused the heck out of our Nora as she kept going over to them. Once she decided that it was her mission to remove every toy from their toy bag, much to the annoyance of the five-year-old owner of said bag. 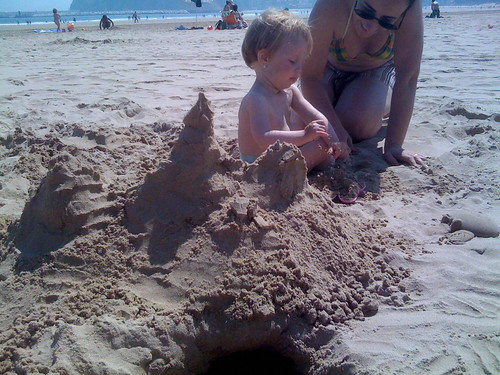 I had totally forgotten just how much fun playing in the sand can be. I had lots of fun digging holes, burying various parts of my body, and building "castles" and walls. What you see above is a castle I built...over an underground tunnel!!! [Please hold your applause until the end of the post.] 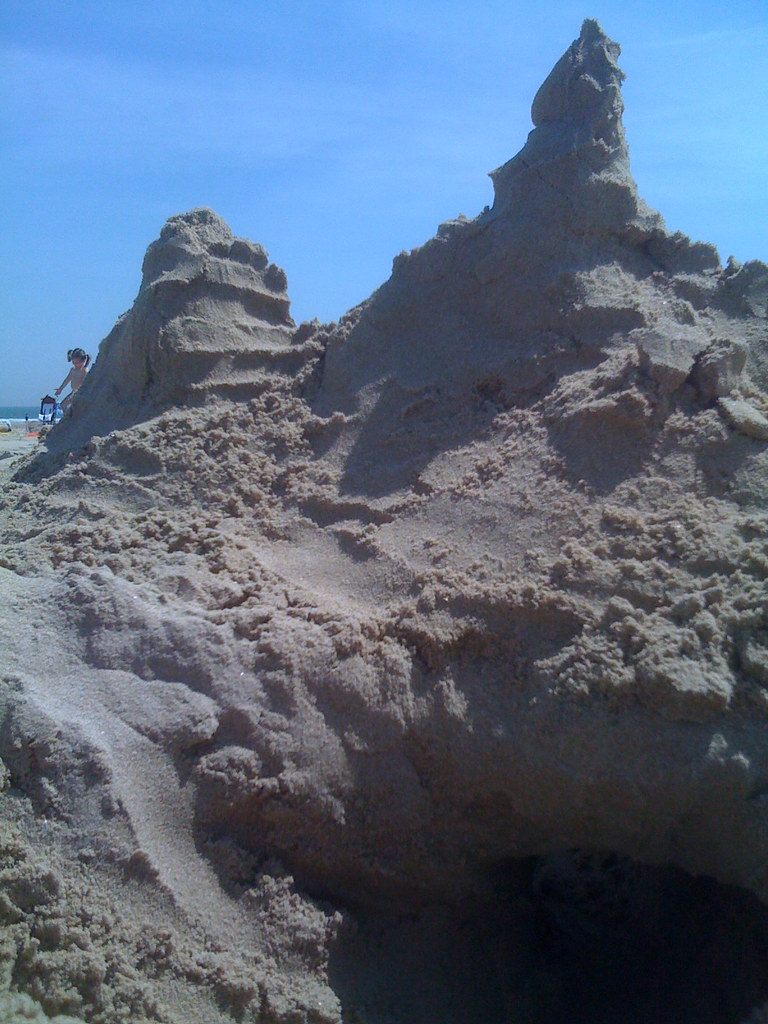 My castle towers into the clear blue sky. 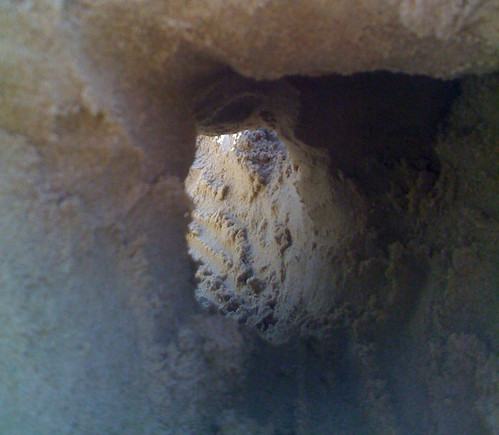 The secret tunnel under the castle. 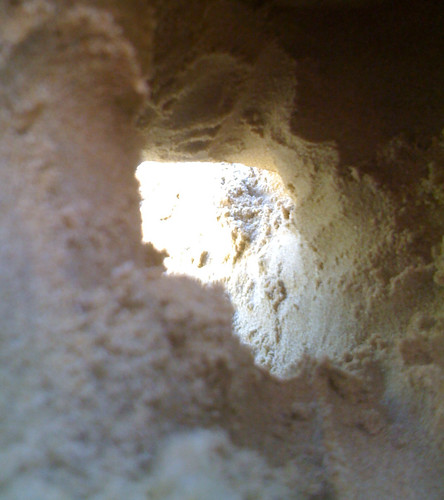 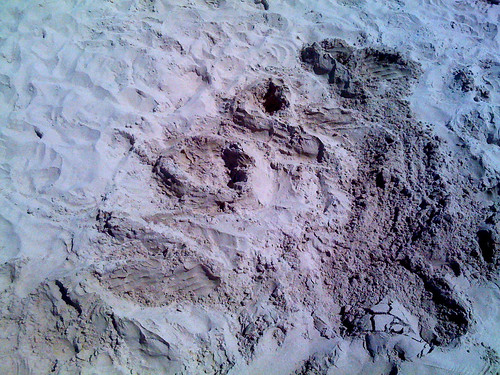 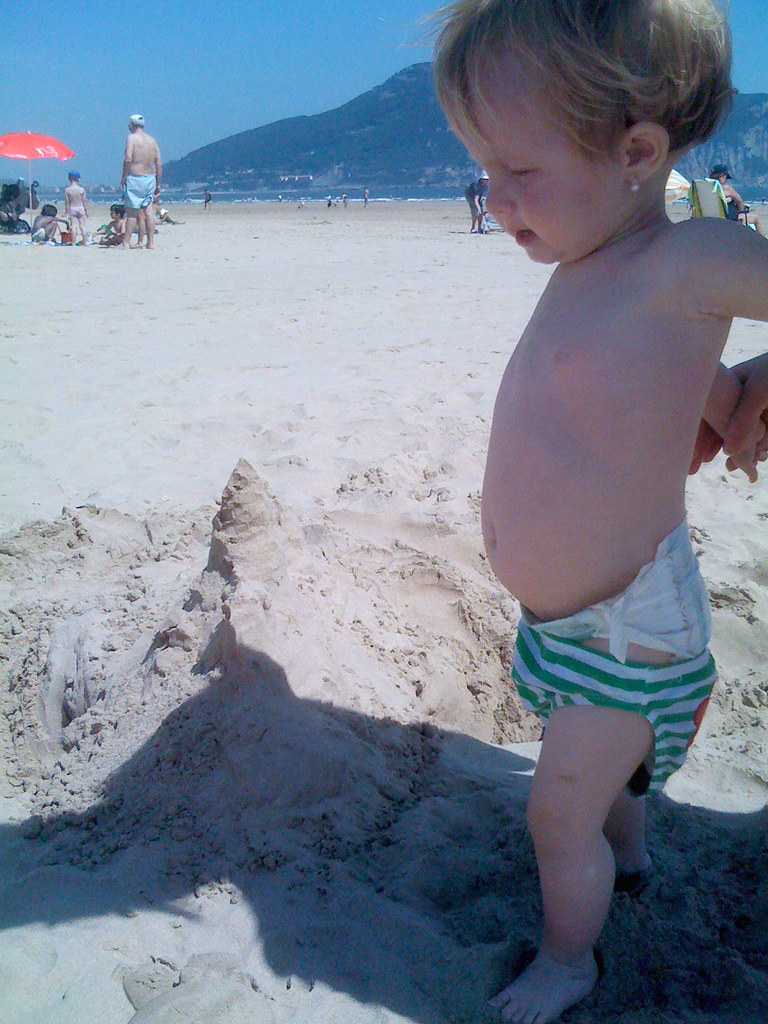 With that enormous belly and very little hips, her bikini bottoms kept sliding down.

After about two hours at the beach, we were pretty worn out, so we headed home for baths and showers all around and to continue the rest of our Saint John's Thursday.