Today, my wife and I we took full advantage of our childless weekend to do a little local tourism. One of the "must see" attractions of Cantabria, the northern region of Spain where we live, is the Cueva El Soplao, an ancient cave discovered by miners in the late nineteenth century and only opened to the public in 2005, containing some of the finest known specimens of stalactites and stalagmites in the world.

The stalactites form at a rate of about one centimeter every 150 years. Some of them are two or three meters long. That's 45,000 years old. It's rather mind boggling to look at a stalagmite standing as tall as I am and think that, in the time that it takes to have all the happiness, sadness, pain, pleasure, and joy of one entire human life, this structure gains a couple millimeters. And then, once you've contemplated the single tree, you take a step back and see the whole forest of thousands upon thousands of stalactites and stalagmites... You can't help but have a transcendent moment and appreciate the transience of your own existence. 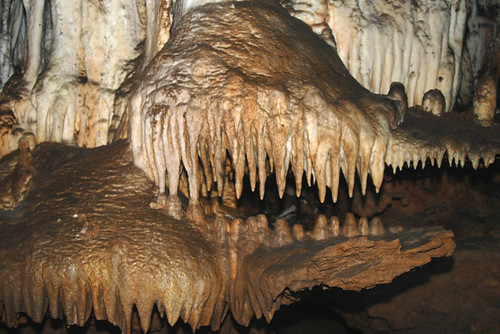 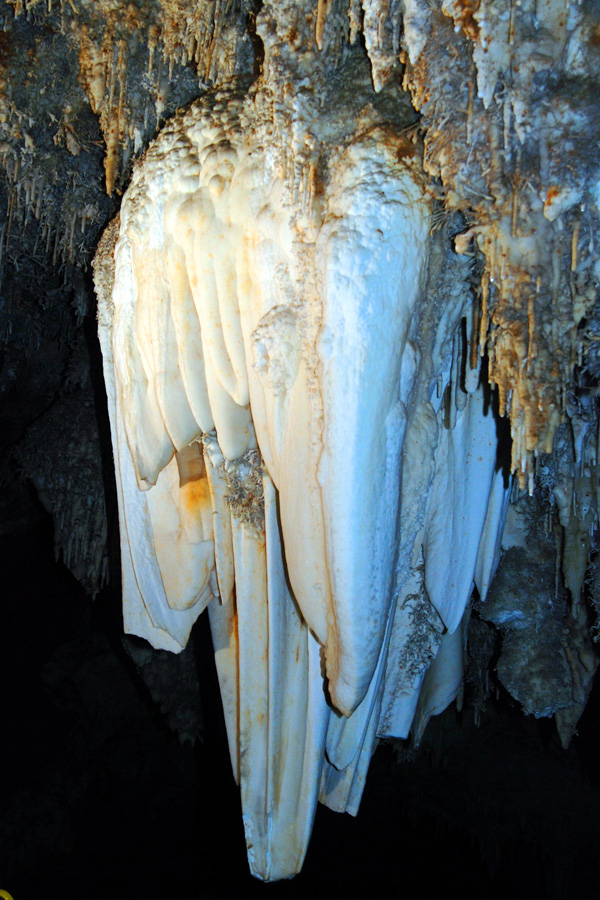 Some of them take on a curtain-like look to them, causing some of the stalagmites to look like sheet-wearing ghosts.

Because of the geological timescales involved, stalactite growth is a little hard to study scientifically. However the basic process by which stalactites and stalagmites grow is fairly well understood and makes complete sense:

But wait! This is where things get wacky...some of them, called helictites, grow sideways! Some of them grow up from where there is no stalactite coming down. Some of them grow in spiky balls with radial symmetry and others like winding tree roots or vines. And no one knows why.

The best theories of helictite formation involve some combination of wind and capillary forces. Others, which seek to explain the radial symmetry, involve crystalline structures and magnetism. It's just difficult for a scientist to study something that will only grow five millimeters in her entire career.

One thing that constantly kept popping into my mind when I was looking at these helictites was just how organic they looked. That was almost the most impressive thing about the whole cave experience. How could water and rock that would be like this even if life had never appeared on the planet look so much like tree roots or corral or sprigs of grass? Absolutely amazing.

I followed the rules and took no photos and touched nothing in the cave. All of the photos I've provided here were found on the internet. Here are some other good ones. The desire to reach out and feel one of the white wet glistening limestone pillars is quite overwhelming. When I was in the cave, I commented to my wife that they should have one stalagmite where they just say, "Screw it, we're gonna let people touch this one." I would have even paid extra.

Return to the Planet's Surface

After we rode the old miners train back up to the tourism office and gift shop, blinking furiously as our irises contracted, we were disappointed to see that a cloud bank had rolled in and the gorgeous views we'd missed in our rush to our pre-purchased 13:30 tour were no longer visible. 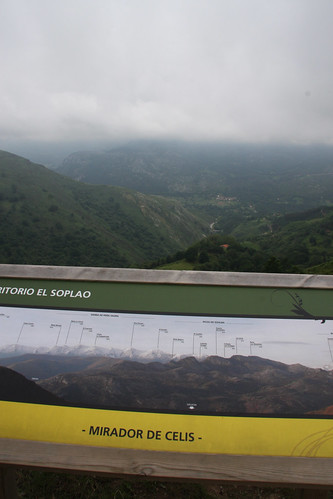 Despite only feeling like about 15 minutes, the cave tour took a full hour, so by the time we got into the car and were leaving, we were starving for some lunch. We stopped at the first little one-church-two-bars-ten-houses town we found and stumbled into glory. Well, actually the restaurant, which was in someone's basement, was called Casa Gloria. It was one of these places like we experienced in Rioja that only made one thing, but they made it really well. In this case it was lechazo, which means "lamb that was only ever fed milk". Actually they had cabrito, baby goat (kid?), too. The house wine was a 2001 Rioja Crianza, and the leg and ribs of the lamb we were served were perfect. It was one of the best meals we've had in a long time. Did I mention we were starving? 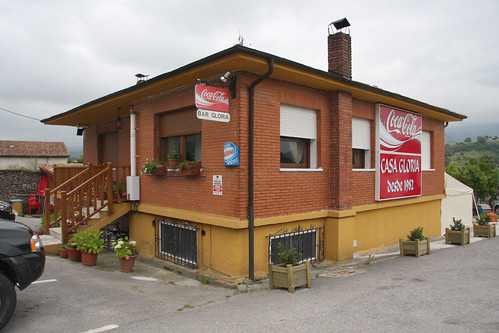 Unassuming house in the middle of nowhere with a killer one-dish restaurant in the basement. 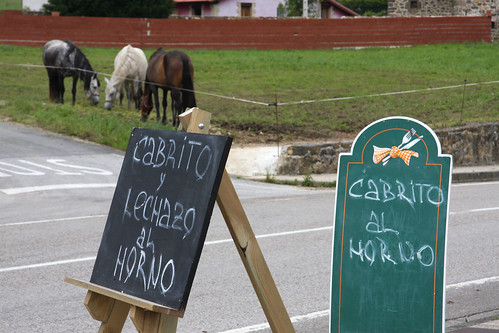 Their menu board out on the highway, with some horses across the street. Al horno means "in the oven", in this case, "roasted".

With tummies full and the geological insignificance of our lives understood, we headed home for a late hour-long Spanish siesta, during which the stalactites and stalagmites in the Soplao Cave grew 7.6 nanometers.