The group of friends that Marga and I dance salsa with a couple times a month organized a trip down to the Rioja region this past weekend. On Friday evening we drove to my in-laws in Mondragon to drop off Nora. Because of my work and errands Marga had to do, we left home at 22:00, a full hour and a half after Nora had gone to bed. While docile all the way from crib to car seat, she ended up crying the whole ninety minute trip. I dislike driving late at night, and it was nice to have someone in the car to keep me awake. On Saturday morning we got up fairly leisurely and left around 11:00 to head south to the Rioja region of Spain. We had a hotel booked in Logroño, but, after getting in touch with our friends who were driving down from Cantabria, we went first to a tiny, tiny town named Tirgo to have lunch in a restaurant that one of our friends knew about. There was no menu, they just had what they had that day. Luckily it turned out to be fried peppers, chorizo, morcilla (blood sausage), salad, and lamb chops. [I started salivating again just typing that sentence.] After finding the restaurant and reserving a table at 12:00, which is waaaay too early for Spaniards to have lunch, we drove to the nearby town of Santo Domingo de la Calzada, which a dictionary might lead you to believe means Saint Dominic of the Dual Carriageway, but calzada also generally refers to shoes and was the name of the guy who built some bridges there and founded the town. The Way of Saint James, a well-traveled pilgrimage route, passes through the north part of the Rioja region of Spain on its way to Santiago de la Compostela, in Galicia. In 2009, the town celebrated the 900th anniversary of the death of its founder. Santo Domingo de la Calzada is embedded in the general knowledge of many Spaniards because of a miracle that allegedly took place there in the 14th century that is summarized by the rhyme:

The following is translated by yours truly from the Wikipedia page.

In the 14th century, a young 18-year-old German pilgrim named Hugonell, is traveling to Compostela, accompanied by his parents. A young girl who works in the lodge where they are staying falls in love with him and wants to make love to him. He says no. Rejected, and with vengeful thoughts, she places a silver cup in Hugonell's bag and later accuses him of theft.

Just as Hugonell and his parents are getting ready to leave to continue their pilgrimage, the judge arrives and checks his bag for evidence of the theft. He's found guilty and sentenced to be hanged. His parents can't do anything but pray to Saint Dominic. Once he is hanged, they go to his body to say their goodbyes, and he speaks to him and says that he's still alive, thanks to the Saint.

Delighted, they go to communicate the news to the magistrate, who, just at that moment, is sitting down to eat a meal of a hen and rooster. Naturally, the magistrate mocks what he hears and says the well-known phrase, "Your son is as dead as this rooster and this hen that I was about to eat before you interrupted!" At that moment the birds jump up from the plate and begin singing and crowing with joy.

Because of this story, the town cathedral still keeps chickens inside, as I assume most churches did back in the middle ages. I'm not sure how it's learned, but all the Spaniards I was with knew the rhyme, and some knew the story of the miracle. One of my friends joked, about the story, "They really should cook their poultry better here."

When we were discussing the story in the van on the way to the town, the person in the very back seat said she was hot and asked the person in front of her to open the window. I said, wittily, "If you're roasted, sing!" Everyone burst into laughter. 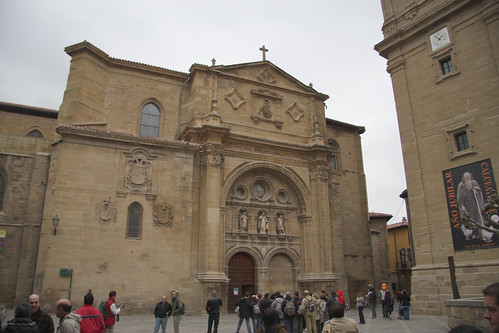 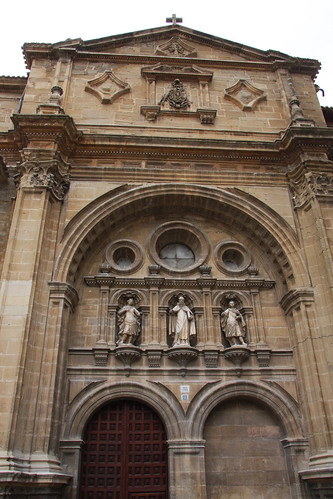 I assume that's Saint Dominic there in the middle. 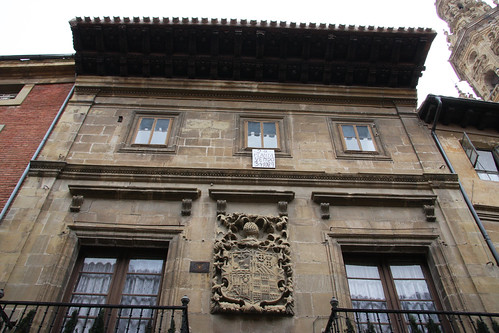 This medieval house right next to the bell tower has a second floor apartment for sale! 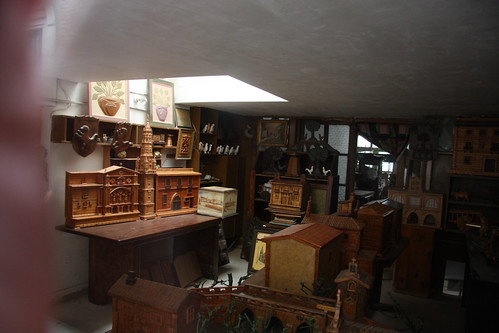 Peering nosily into a woodworking shop where someone has carved a model of the church. 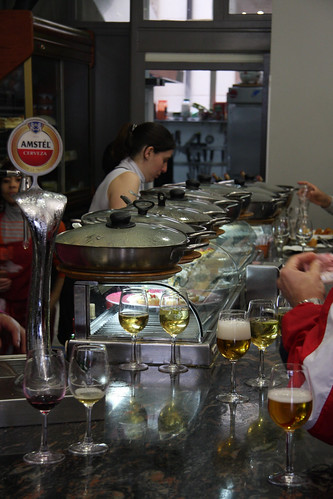 On the way back to the car after our appetite-building walk, we stopped for a vermouth and a calamari tapa at this bar. 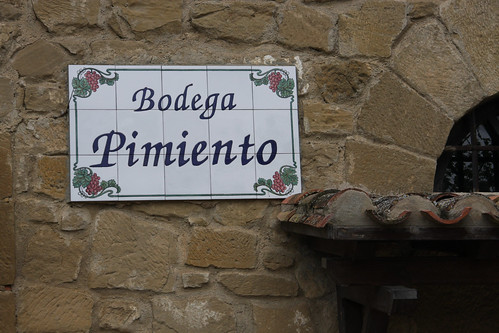 We ate lunch at the Bodega Pimiento. 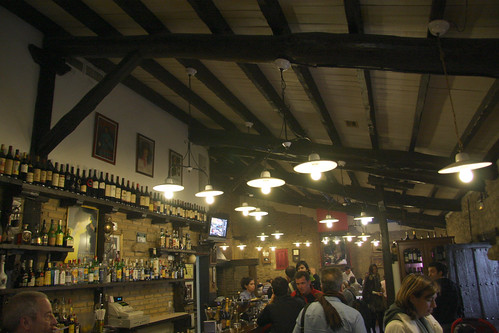 It was very rustic. 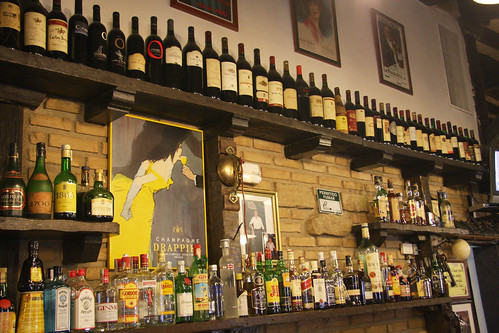 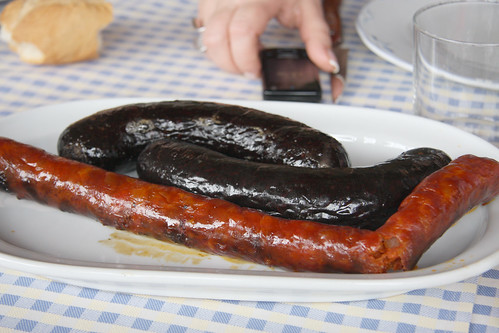 The chorizo and morcilla for our first course. Morcilla, blood sausage, often with rice inside, might be my favorite Spanish food of all. 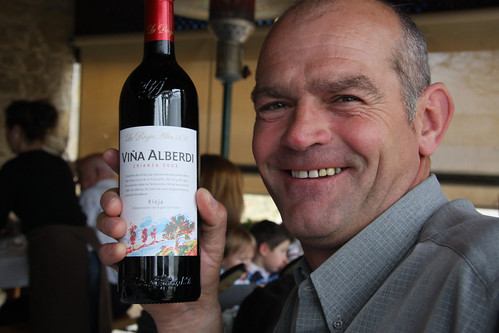 Agustí­n chose the Viña Alberdi 2003 that we had to accompany our meal. 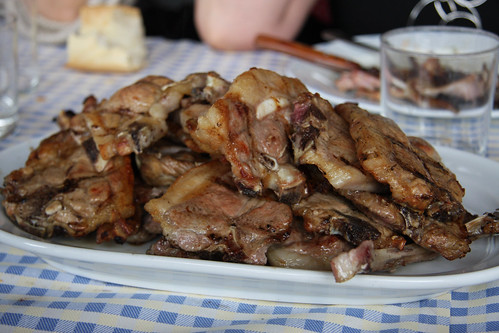 Lamb chops, flavored, I think I heard, with the smoke from grapevines. They were fantastic. I ate way too many of these. 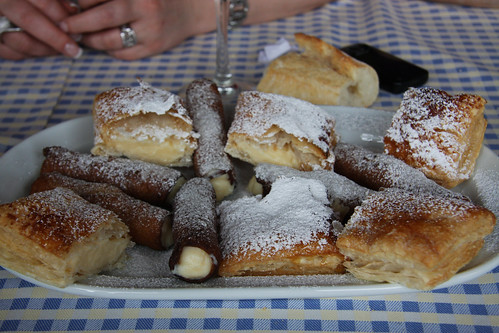 An assortment of cream-filled, sugar-dusted desserts. 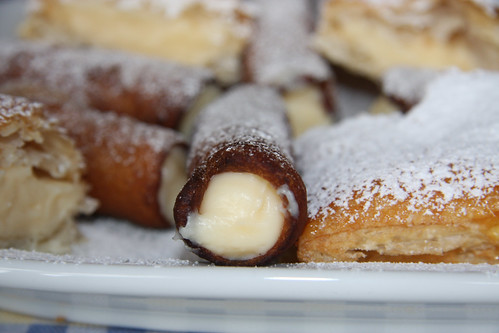 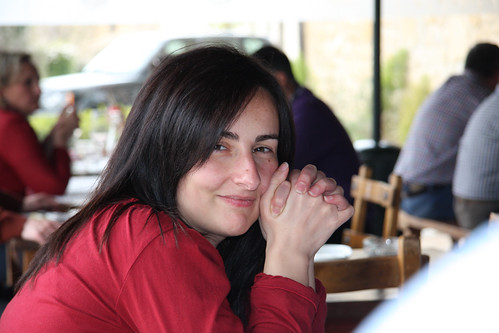 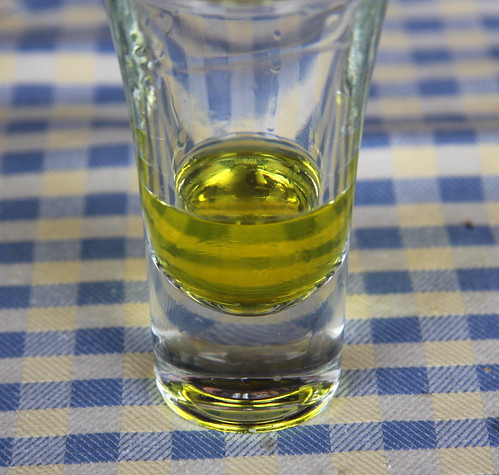 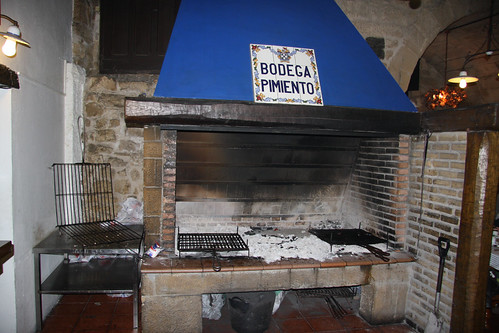 On the way out, I noticed the grill where our food had been cooked.

After checking in a the hotel in Logroño at 17:00, we all decided to take a siesta and regroup at 20:30 to go out on the town. We took three taxis (there were eleven of us) to the city center and began several hours of tapa consumption. We ordered small beers and tapas in each place, consuming seven or eight tapas over the course of about three hours. I LOVE this style of bar hopping, known as picoteo, because you're never bored or hungry or thirsty or full or drunk. In good company, you can maintain a level of blissful contentedness for hours on end. Some of the tapas I can remember include, foie gras, little ham sandwiches, patatas bravas (fried potatoes in a spicy sauce), and grilled mushrooms. 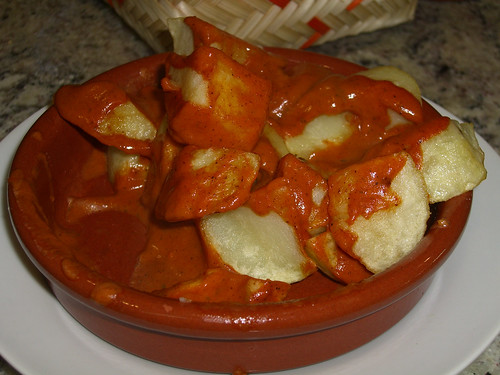 These are patatas bravas. The sauce was just the right amount of picante for me, but too much for most of the group. 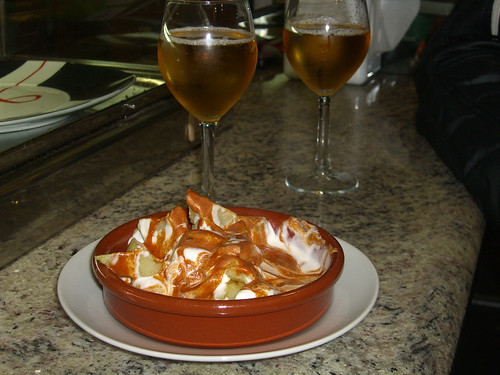 The solution is to mix the spicy stuff with a cooler white sauce. 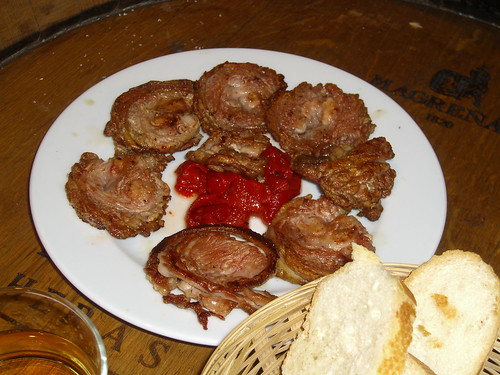 These are embuchados, lamb intestine rolled up, cooked, and then sliced into thin rolls. Normally I'm all for some good offal, but these were a little bitter. 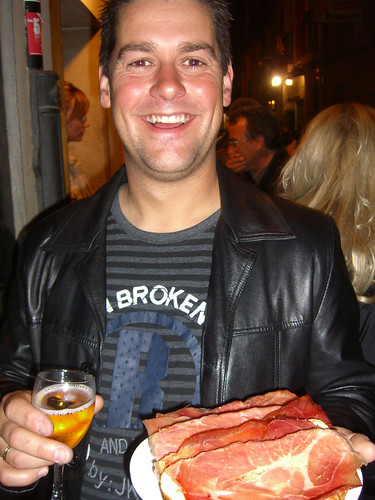 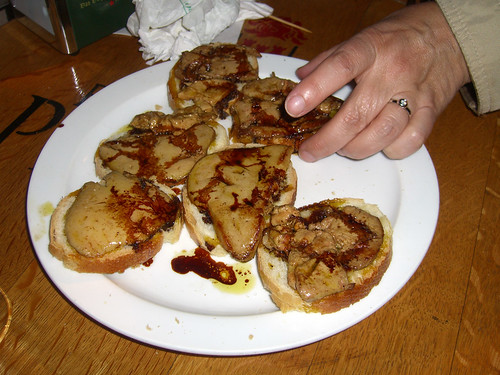 Afterwards, we took a taxi back to the neighborhood of the hotel, where there were two salsa dancing clubs. We ordered mixed drinks and danced until 3:30 in the morning.