Nora, the weekend that is now ending was our first one back in Spain after recovering from jet lag. We had no company (your aunt visited Thursday and Friday), and we were looking forward to a nice rest. On Saturday we went to the closest mall, in Santander, to pick up a few items and research car seats for you. We learned that you still need to gain a few kilos before we can face you forward in the car, no matter how cramped you are facing backwards. I'm not sure if it was the experience of seeing so many people around you in the food court, but you didn't want any of your vegetable puree for lunch or the yogurt either. You were only hungry when Mommy and Daddy were eating bread. And your cookies. During our trip to the States, you trained us to give you cookies pretty much non-stop when you're in your now-crumb-covered stroller. When you finish one, you spin around, reach out your hand and screech. It was cute the first dozen times. You didn't sleep a wink at the mall, and you didn't eat anything either other than cookies. Although we weren't walking more than a few hours, the mall experience completely exhausted your parents. Just as we were staggering towards the car in the afternoon sun, you began to cry. And cry. And cry. For the entire 30 minute car trip back home, and then for another 15 minutes as we walked zombily around town. Your bath, pajama donning, and evening cereal went fairly well, and you went to bed with less than twenty minutes of screaming, allowing your parents to snuggle a bit on the couch to watch Barcelona defeat Real Madrid rather soundly.

Sunday started early with screams coming from your room at 7:00. I was going to tell you go back to sleep, but my nose told me that you needed a diaper change. Your screaming during said diaper change awoke your mother, and we decided to give you some breakfast and see if you felt like sleeping another couple hours as much as we did. You didn't. From sunrise to sunset you were unhappy, just generally grumpy, I think, but I wouldn't have any way to distinguish that from teething pains, so what do I know?

You slept for about thirty minutes when I took you to go buy bread. By the time we were in the elevator to go downstairs you were asleep. You did better with the veggies today, but you still don't eat as much as you used to four months ago. In an attempt to get more food in you, we switched you to flavored strawberry yogurt instead of the natural no-flavor-added yogurt you normally have (until your introduction to the flavored kind in the US). You ate all but one spoonful of the yogurt, so we were happy. Too bad most of it came back up in the car on the way to the restaurant.

We decided to go to a restaurant in the middle of nowhere that your mother's employer has taken her to a few times. It's very, very, very rural. We were sitting outside, and four separate patrons rode up on horses, hitched them, and went into the bar. That rural. The restaurant specializes in fried eggs, chorizo, and morcilla (blood sausage), which is what we ordered. 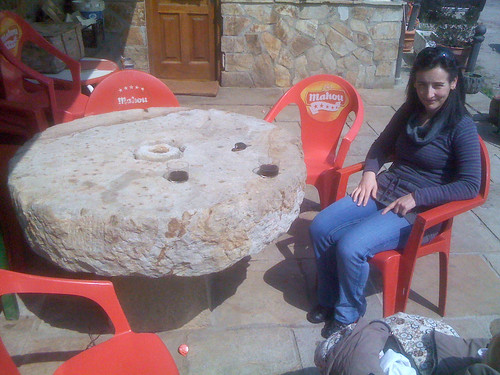 Our table seemed to be an old grinding wheel from a mill. Unfortunately my legs didn't fit under it. 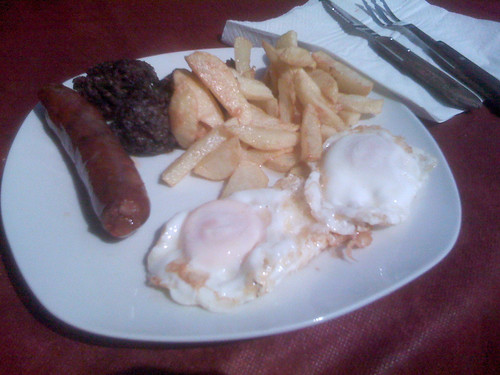 This filled us up for the whole day. And the Brits call this "breakfast". 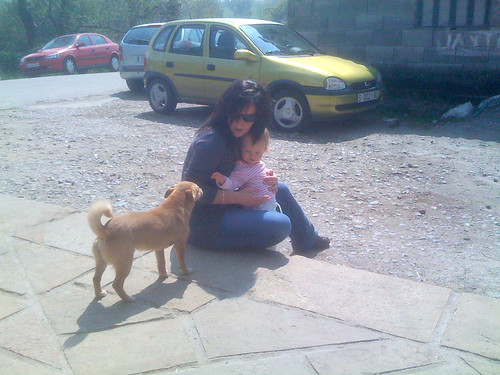 There were about three generations of what looked to be the same dog. The youngest one liked you.

For a lot of the time at the restaurant, and the whole way home in the car, you cried. Upon arriving home, your mother and I were exhausted. She lay down upstairs with a book, and I lay on the sofa with a book, and you lay in your crib screaming in exhaustion. Eventually we all slept...but not for long. At 5:45 you began screaming again, so we all groggily got up. You were inconsolable, squirming in our arms and desperately trying to get back into our arms when we put you down. So we decided to go for a walk.

About two minutes into the walk, your mother, who takes the majority of your abuse, asked if she could go back home and sit quietly in silence. I agreed. I had a secret weapon, you see. I had brought along my earphones to plug into my iPhone. Unfortunately it was surprisingly difficult to find music that would drown you out. You do, however, blend in rather well with 90's grunge rock.

During our walk, I came up with an idea. I'm going to be rich! You know that sound proofing, echo reducing foam with the little pyramids that they have in recording studios? What if they manufactured some of that, but with cute caricatured animals, cars, trains, etc. on it for lining the walls of a baby's room? Genius!
See what kind of thoughts you make me think?

As we walked, I could feel everyone we passed looking at me. There were two kinds of looks. There were the looks of "What poor child is crying and her father is not only doing nothing to help her, but he's listening to music!" These people don't have children. It was interesting that there was another window of people between about 50 and 60 years old that also looked at me disapprovingly, having forgotten what their own kids were like and without grandchildren yet. The other look was one of "That poor man is stuck with that shrieking monster, but at least he has some music." Every single person stared at me in either disgust or pity, neither of which I liked.

I walked and walked. You screamed and screamed. We did the maritime walk three times. Eventually, at 7:40, a full two hours after you began screaming, an eerie silence fell over the stroller, punctuated by sniffles as you slept. On the way home, I sat down and had a beer, emotionally exhausted.