Nora, twelve days ago, on March 24, 2010, you turned one year old. They were perhaps the longest 365 days of our lives, but your mother and I made it...and are now the proud, if not dumbfounded, parents of a one year old. By a coincidence involving the date your great-grandparents chose to get married, we spent your first birthday in the United States. You showed your shiny new blue passport and grinned as the immigration official took your mother's fingerprints and mugshot. Mommy only has a red passport. You did better than I expected on the transatlantic hop, preferring your mother's lap to mine, thus allowing me to watch a few movies. They didn't have a microwave on the plane, just an oven, so when the flight attendant tried to heat your vegetable puree lunch in a bowl, she only managed to heat the bowl. On the ninety minute third leg of the journey, we were exhausted, and you spent sixty of the ninety minutes crying as loudly as you could. I experienced this in surround sound, because you were to the left of me and a six-month-old (who was freakishly born with two teeth) was on my right failing to harmonize with you. We did not know until our seats were already chosen for the pond hop that it's possible to request a bassinet on the long flights. We did so on the way back and it made a HUGE difference not to have you sitting on our laps the whole time. The trip was quite stressful for you, being flung into a foreign land with dozens of people so excited to meet you. As a result, you clung very tightly to your mother for pretty much the entire fortnight. Your grandparents babysat you for two nights and you behaved fairly well for them. Your canine uncles (my parents' dogs) were a new experience for you. Uncle Buster sussed out early that you weren't a threat to his food and pretty much ignored you. Ever the social outcast, Uncle Blue may never have seen such a small human before and was terrified of you. Your favorite uncle was by far Uncle Sam, a ten year old West Highland Scottish Terrier. 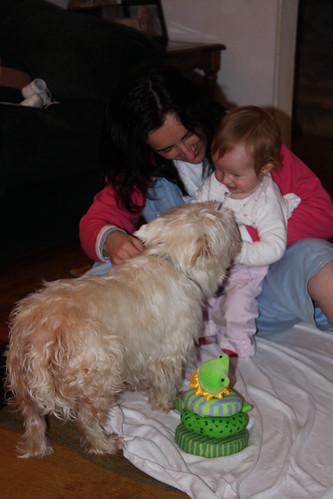 You really liked the Johnny Jump Up that your grandmother bought you from the baby consignment shop especially for this visit. You are right in the target demographic of mobility and strength. And your fascination for telephones went unabated throughout the visit. With your grandparents' phone, pressing the two biggest buttons resulted in first acquiring a dial tone and then forwarding the dial tone to the other phones of the house, causing them all to ring. 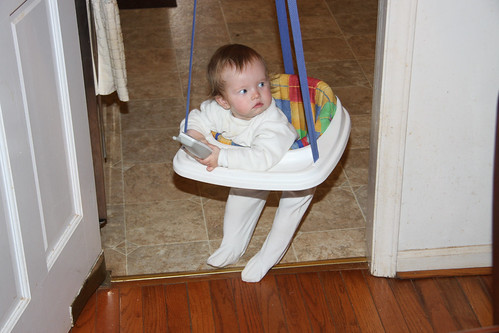 You seem to look guilty a lot lately, too.

This trip saw your first introduction to something American children have been eating and throwing on the floor for generations: Cheerios. Of course you loved them. Since Spaniards aren't big cereal eaters, I think I've only ever seen flakes in the grocery store, but I will have to keep an eye out for whole-grain tori. 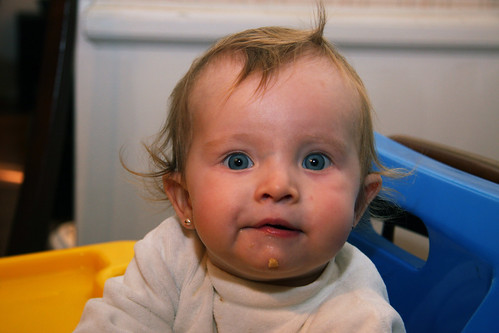 You also discovered the food storage facility located below your mouth. I still use mine sometimes.

Your grandfather is a pinball wizard. He discovered that pinball can console you in ways that no amount of rocking or cooing can. What's not to like about a shiny ball bouncing around flashing lights and flippers flipping. 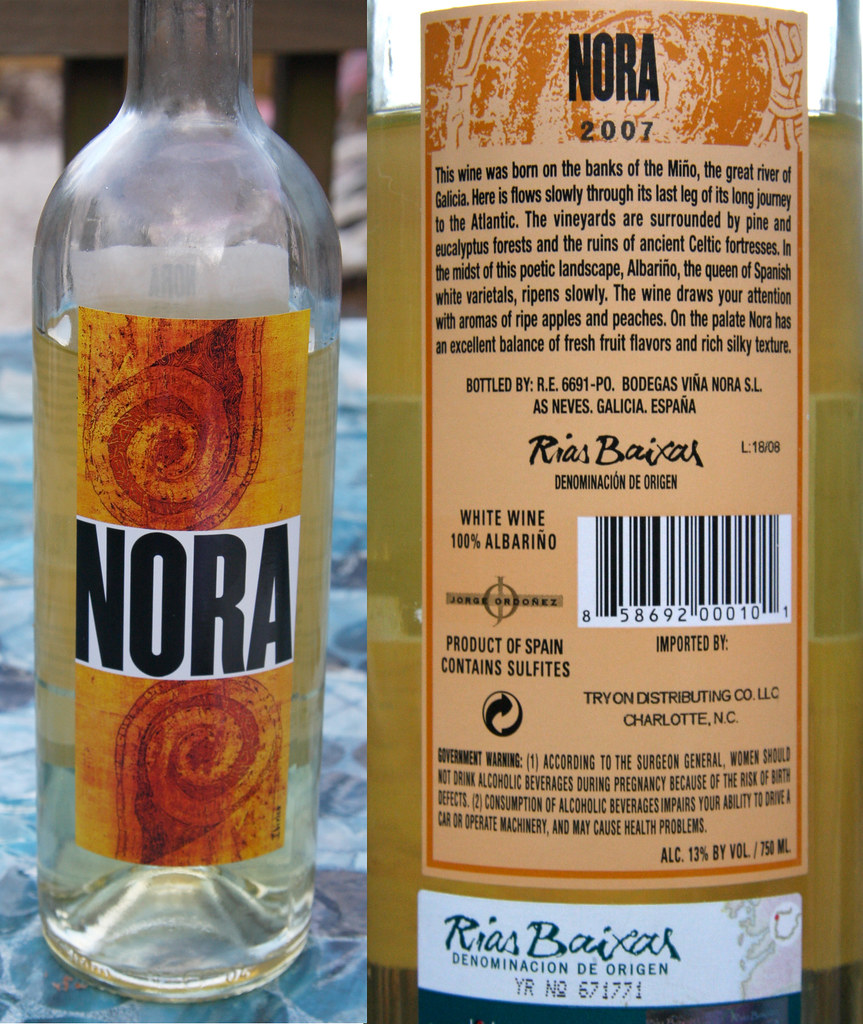 On your birthday, we opened two bottles of Nora, a gift from friends Jeff and Jane, in your honor. If only we'd known about it when we took our trip to Vigo last month...we passed right by the vineyard with the most beautiful name. 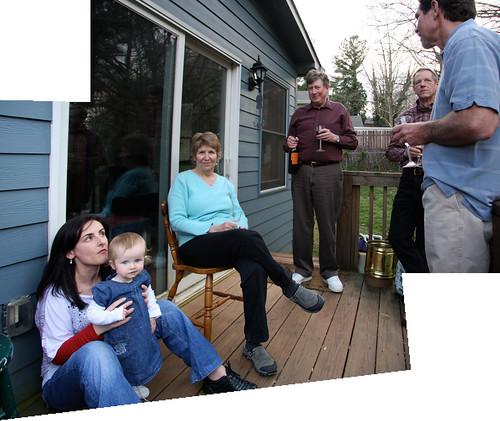 The weather was wonderful, so we spent the first part of the party out on the deck.

On the Friday before we left from Spain, you and I went to the local grocery store, Susinos, like we always do. They are very fond of you in there. While we were discussing our upcoming trip with your friends there, my friend, Andrés (of politically scandalous fame), came over and said he had a gift for us. He pulled out a bottle of wine inside a plastic bag and said that it was to be taken to your grandparents and opened on your birthday. When I pulled off the plastic bag, I was amazed to discover that he had taken this photograph and painstakingly cut out the background and replaced it with the US and Spanish flags. The amount of work he had put into it out of pure thoughtfulness was amazing. It's no wonder we go almost exclusively to his store. 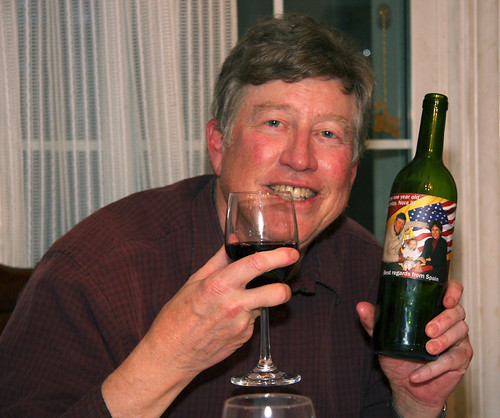 My parents loved the gesture as well.

Andrés, even though he mispronounced your name a little, I think you will agree that his gracias is sincere. 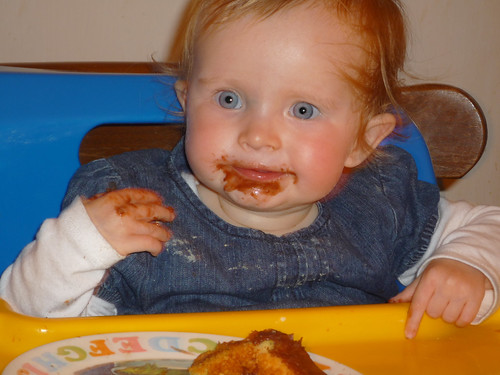 As is tradition in the United States, we gave you a piece of cake and let you eat it as you saw fit. I also recorded a video of you eating it, which I will present here. As a result of most of the attendees to your birthday party being baby boomers your grandparents' age and the fair amount of wine consumed during the meal, while you were eating your cake they spontaneously broke into the 1963 billboard hit, It's My Party. Thankfully the video camera was still rolling so your reaction to a song about sixties teen angst has been recorded for posterity. Priceless.

After dinner, your parents and grandparents performed a dress rehearsal of some original songs that would later be performed at the Rasmussen Family Reunion later in the week, including the tongue-in-cheek soon-to-be-classic, If My Family's All Crazy, Why Am I Sane, sung to the tune of I Saw The Light. 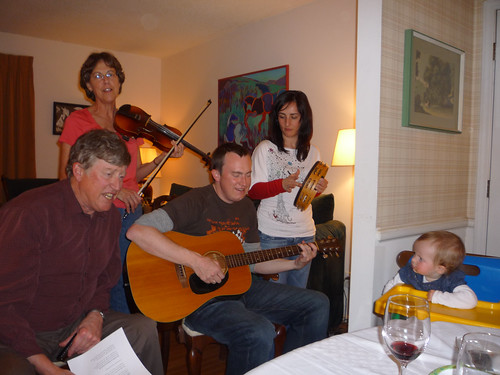 You didn't know your family was so musical, did you?

Then came the presents... 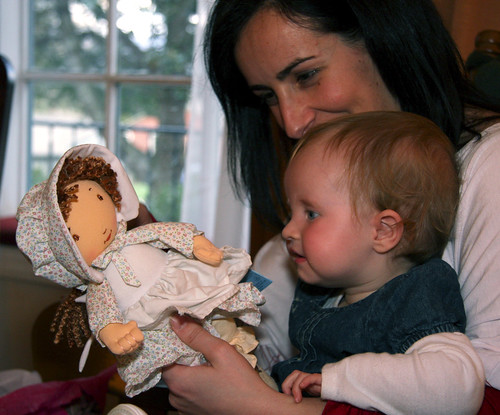 You seemed very fond of this doll. 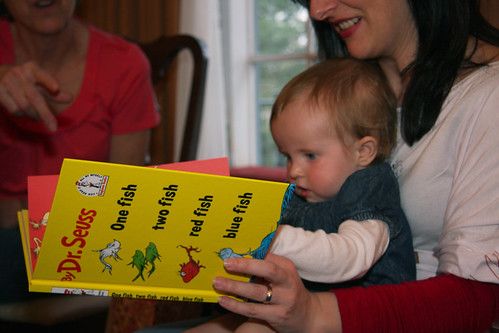 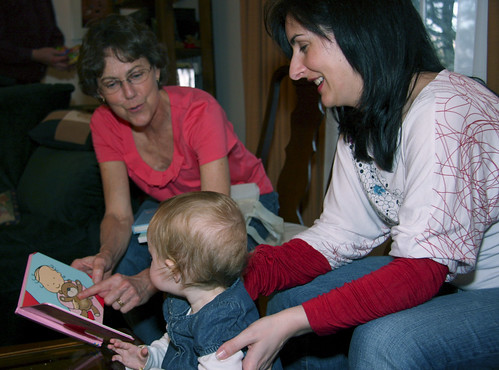 And of course more books. You love turning pages. 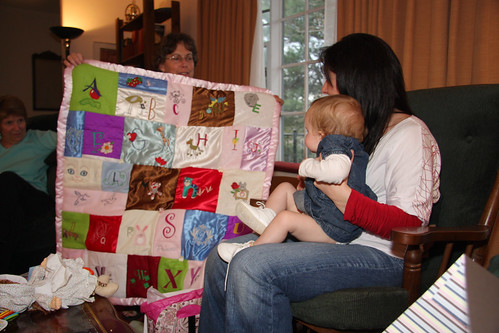 Your grandmother gave you this beautiful alphabet quilt that she bartered some work for. 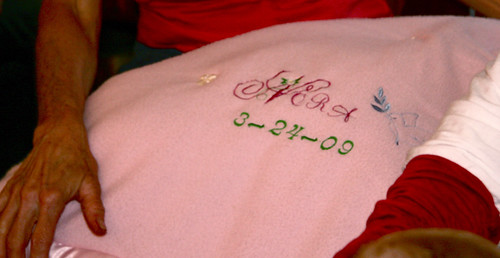 It's embroidered with your name and birth date.

Eventually the guests had to leave and you came down off your chocolate high and went to bed. It has been one of the most amazing years of my life as I have learned to care for and love you in ways I never understood before. We've both changed a lot since I snipped that umbilical cord on the Tuesday afternoon of March 24, 2009. I look forward to spending many more years with you. 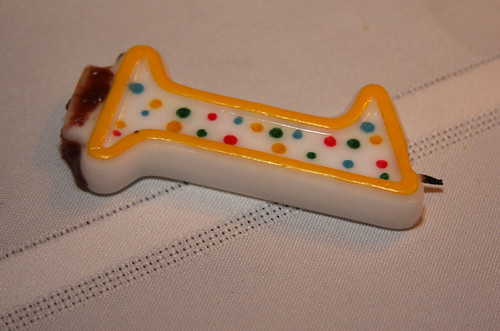