On Friday, March 19, 2010, my beloved grandfather passed away, the day before his only great-granddaughter, Nora, was scheduled to fly, with her mother and me, to visit him. What saddens me most is the unfortunate circumstance that had given us hope for an encounter between my grandfather and Nora. His mind was sharp until the very end, but his hearing made communication difficult. His deterioration was slow, as he never really had any illnesses, and he was a good sport until the end. He was the favorite of all his nurses at the nursing home because he would nod in agreement to anything suggested, partly because of his poor hearing and partly because he was just such an agreeable person. I understand this completely because much of my initial charm to my Spanish family was based on my smiling and nodding and going along with whatever they suggested, when a lot of the time I had no idea what was being suggested. Looking back, I can't believe how close I came to not traveling to the US in last month. I visited with him for a half hour on one of his better days. He recognized me and understood some of what I said. His obituary in the Sunday paper reads:

Born in New York, on March 6, 1915, James attended public schools in Brooklyn and Queens, winning two medals in the 50-yard dash and one for a fire prevention essay. While in school, he worked afternoons and Saturdays for a fruit and produce merchant.

After graduating from high school in 1931, he worked in the filing department of a Wall Street law firm. In the evenings he attended New York University. He graduated in 1937 with a degree in accounting and with additional coursework in the humanities sufficient to qualify for acceptance into the English literature graduate program at the University of Michigan, where he earned his master of arts degree in 1938 and, after the war, his PhD in 1950.

In 1941, James married the only love of his life, Jean Belknap of Port Clinton, Ohio. Three months later he was drafted into the Army as a private, presumably for one year's service. Pearl Harbor changed everything. James was commissioned 2nd Lieutenant in 1942, and went on to serve in England, France and Germany, ultimately as a major in General Omar Bradley's manpower personnel office.

After helping America win World War II, James and Jean settled down in Ann Arbor, Michigan, where he spent the rest of his professional life serving the University of Michigan, working as a teaching fellow in English, assistant dean, professor of English and director of the Residential College. He retired in 1983.

James loved teaching, reading, writing, travel, the University of Michigan and his family. He wrote and published numerous articles about undergraduate education, two volumes of personal memoirs and dozens of travelogues entitled Travels With Jean.

Jim and Jean were active members of the St. Andrew's Episcopal Church in Ann Arbor.

He was preceded in death by his parents; sister, Betty Clarke; and his lovely wife, Jean.

In lieu of flowers, donations may be made to either St. Andrews Episcopal Church or the Residential College at the University of Michigan.

A memorial service will be held in Ann Arbor later in the spring.

I don't expect to touch as many lives as positively as he did, being an academic leader, but if I could enjoy my job, travel, raise as wonderful a family, love my wife as much and as long as he did, and die peacefully at 95 like my grandfather has, I couldn't possibly ask any more of life. 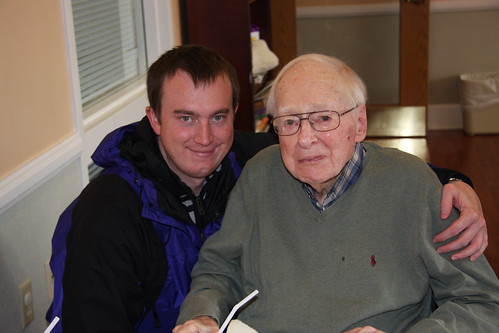