Talking on the phone while driving 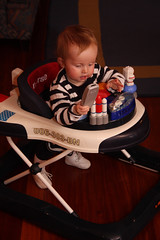 Probably the very first mimicking Nora ever did of a behavior she saw in us that we weren't intentionally trying to get her to mimic was her intuitive understanding that it was important, for some reason she didn't understand, to hold the television remote control in your hand. It was just something that was beneficial to have in your possession. She's done that for months now. Only recently, however, she has become fascinated with telephones. From her point of view, it must seem that, every so often, a grownup will hold a telephone to their ear and talk, sometimes pausing to listen, and generally devoting all their attention to the telephone. I'm certain that she doesn't understand that it's a device for communicating with another person that's not in the room. She's nowhere near that level of cognition. But she does know how to mimic what she sees us do, which is to hold the phone up to her ear, or sometimes just in front of her face, and say "ya ya ya ya ya!" into it. It's very "Charlie Brown's teacher". And sometimes she scrunches up her face like she's listening seriously, before continuing to talk.

Another expression she's picked up lately is one of opening her eyes and mouth as wide as possible. It cracks me up every single time. She does it twice in the video below.

In the walker, she can manage a few steps forward if you dangle a sufficiently enticing carrot in front of her, but sometimes she loses control and zooms backwards like a Toyota Camry in reverse, plowing into whatever unlucky obstacle happens to be found behind her.