by erikrasmussen, on Flickr")Several weeks ago, I was contacted by a representative of Proporta.com, a manufacturer of cases and accessories for mobile phones, asking if I would be willing to review three of their products on my blog. I'm always up for new internet experiences, so I agreed. I scanned their website to find the most expensive products that might benefit me. I found nothing over £30. I ended up choosing an Antimicrobial Silicone Case with SteriTouch for the iPhone 3G, a Ted Baker Leather iPhone 3G Case, and a Handy Travel Bundle. I chose the travel bundle because the week before I had lost my airline audio jack and I also needed a new wallet. I was still somewhat dubious that I was a famous enough blogger to receive free products in the mail, but sure enough, a package arrived in a couple days with my products in it, all except for the Leather Memory Wallet that was supposed to be part of the Handy Travel Bundle, which they promised to rectify. I immediately began trying out the new iPhone cases.

Before I begin the reviews, I'd like to mention something. Personally, I don't know anyone who uses a naked iPhone (I call that "going commando"). The fact that everyone uses a case of some kind is pretty good evidence that the sleek nice-for-the-eyes backing of the iPhone is actually not very practical. It's just too slippery. It will slide out of your pocket or hands very easily, which is not something you want your high-end mobile phone to do. There are soft cases, leather cases, and hard plastic cases. Shortly after purchasing my iPhone, I, without much thought on the matter, purchased a Griffin Clarifi case, which has a built in close-up lens. I have been very happy with this product, even though the lens is sometimes hard to clean.

So that's where I'm coming from when I began to test out Proporta's products.

Antimicrobial Silicone Case with SteriTouch for the iPhone 3G 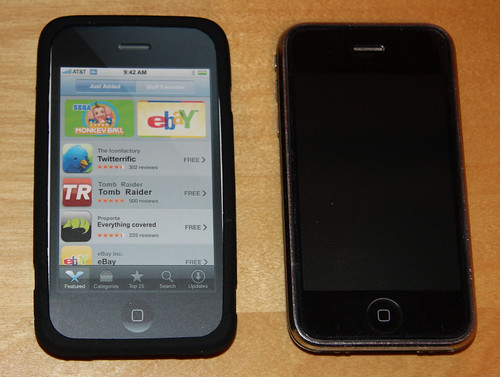 by erikrasmussen, on Flickr") The silicone case with its paper insert next to my naked iPhone.

For no good reason, I decided to replace the anti-scratch film on my iPhone's screen that had come with my Clarifi with the identical one included in the Antimicrobial Silicone Case. The case does what it promises.

After a couple days of use, however, I began to get annoyed by two main problems.

I suspect that these complains are true of all silicone soft cases, and that it is not a particular problem with this case from Proporta. 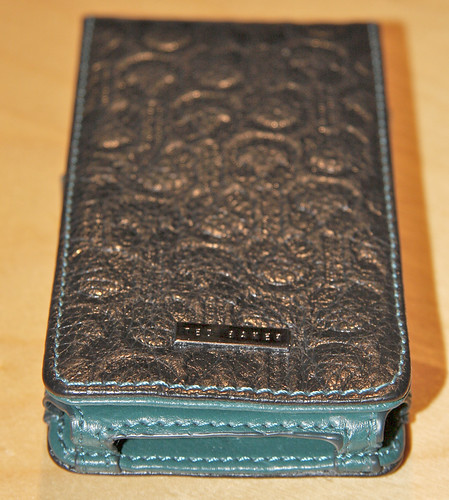 Personally I have no idea who Ted Baker is, but when my wife saw it, she said, "Oooh! A Ted Baker case!", so I guess handbag-aware women might be impressed. The quality of the case is very impressive. The leather screams elegance. And there's something very appealing about the wrist motion to flip up the cover to use the iPhone.

My only complaint about the Ted Baker case is that it makes touching controls on the edges of the screen rather difficult, which is pretty important for doing anything with the onscreen keyboard. Several times during the week I used it, I found myself removing the iPhone from the case (which is very easy, by the way) to type an email before placing it back inside for protection and reading of email.

After a week of normal use, the snaps that seemed so pleasingly crisp when I first began using the case began to get stubborn to unsnap. And eventually one of them broke off. Remember that this is after only one week. Proporta assures me that all their products come with a lifetime warranty and that, due to the handmade nature of this particular product, defects sometimes occur. 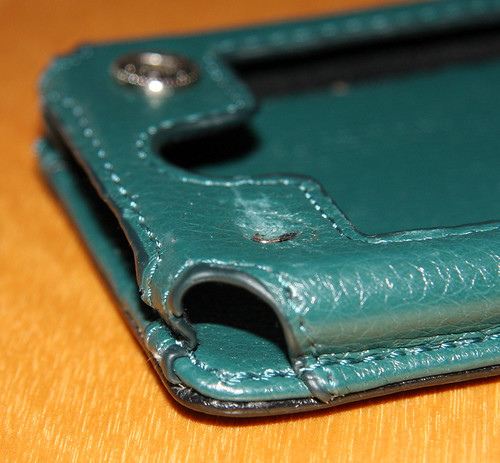 broken snap by erikrasmussen, on Flickr") The broken snap on my Ted Baker iPhone 3G case.

If leather cases were my thing, I would definitely buy and use this product. But I just don't like the extra unsnapping and flipping motion every time I want to use my phone. However if you like leather cases and you want to look like an elegant executive when you use your iPhone, I highly recommend the Ted Baker iPhone 3G case from Proporta.

The third item I chose to review was the Handy Travel Bundle, which consists of an Airline Headphone Adapter, which lets you listen to movies on an airplane without paying the 5€ ridiculous fee the airline offers you, a leather Passport Holder, and a Leather Memory Wallet. I have not yet been on an airplane, so I have not been able to test the audio adapter, but it looks just like my old one. The passport holder is quite nice and will come in very handy in displaying the picture page of my passport in the future. The memory wallet...well... You see, the memory wallet never actually arrived...

A week later, I had a package in the mail from Proporta, but rather than the Memory Wallet, they had sent me another Passport Holder. I reported this to my contact and she asked if I'd send it back to them. I told her that I wasn't willing to pay postage out of my own wallet (not a memory wallet) for Proporta's mistake, but that if she'd like to send a courier, I'd give it to them. She said I could keep the Passport Holder and that they'd send the Memory Wallet.

Shortly after this interaction, out of professional curiosity, I began examining the product ids listed for the products I'd ordered on their website and the ones listed on the invoice. The Passport Holder had the same product id as the Memory Wallet! That would make it pretty easy to mistake one for the other in their shipping database. I informed my contact of my discoveries and she passed my information on to the web developer. Managing databases full of products and the website that displays them and takes and organizes orders is what I do, so I understand that sometimes mistakes like this can happen (although I'd never ever have two products with the same id – that's an extremely amateur mistake).

Another week goes by and I get another package in the mail, and what do I find inside? A Leather Wallet - Limited Edition (St. Patrick's Day). Well blimey!

I emailed Proporta and told them that with their third strike, they're out. I don't really want a Leather Memory Wallet. I just chose the Travel Bundle because I needed the audio adapter and as a bundle, it seemed like more free stuff. Within a half hour I received a call from my contact apologizing again. She said that the Memory Wallet was out of stock and she had, without contacting me, chosen a similar product based on the upcoming holiday. At the very least some sort of "We didn't have X, so we sent you Y. We hope you don't mind." note should have been included on the invoice.

The St. Patrick's Day wallet is actually very nice, and of high quality. If I hadn't just bought a new wallet this week, I might use it for a while. At least now I have a backup.

Proporta's products are very nice. The level of quality and detail is very high. While some mistakes may be made and flaws found, they are very professional about it and, most important of all, actually stand by the motto "The customer is always right." Not all companies do so, and Proporta deserves some respect.

However, none of their products really interest me, so I don't think I'll be using any of them in the long term except perhaps the passport holder. Really, Proporta, it's not you, it's me.

Time to put my Griffin Clarifi back on my iPhone....