This past weekend, we went to Vigo, Galicia, on the Atlantic coast of Spain near the Portugal border. On Thursday morning, we got up early, left The Wee One with my in-laws, and drove seven hours west to the province of Galicia. That afternoon, I worked like normal, feeling extra worldly burning a charred spot on a hotel desk with my laptop, while Marga studied for a test about Project Management or some such thing. On Friday morning, she went to take her test and I worked all morning, except for when I when I went out for a brief cafe con leche and a palmera pastry for breakfast. Friday afternoon, I worked some more and then went out to meet Marga and walk around the city. 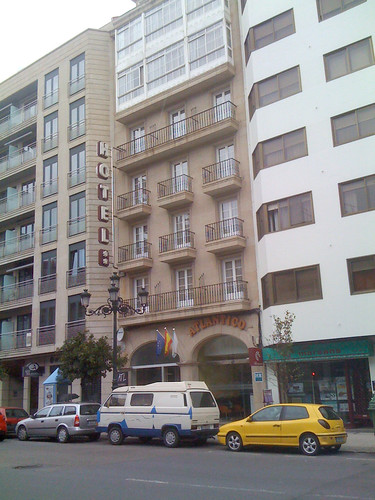 Our hotel was right in the central bar and restaurant district of the city. The window at the top left was our fifth floor room. 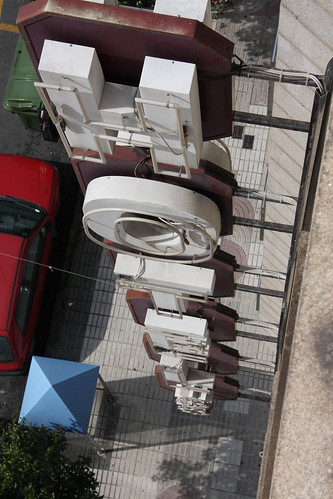 Looking down at the neon "Hotel **" sign from our room. 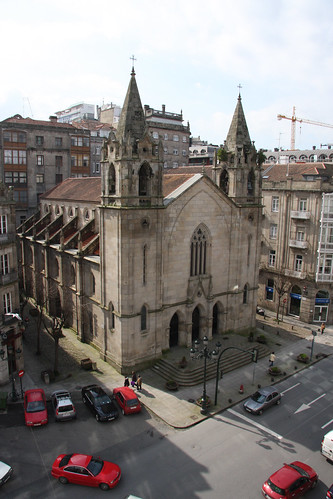 This nice church was across the street from our hotel.

That evening, we went out for a few beers. Marga chose the first place, and, along with our beers, they gave us a big bowl of potato chips and a plate of little breads with meat and cheese toppings. All free, mind you. 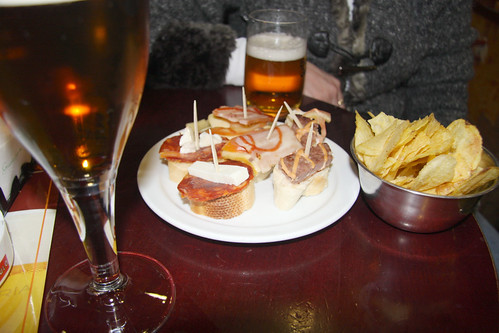 All we ordered and paid for were the two beers.

At the next bar we visited, they gave us a bowl of lentil soup. And then, after we finished the soup and the waiter took our bowls away, another waitress came and gave us some more, thinking that we hadn't had any yet. When we looked surprised, she realized her error and let us keep the extra bowls anyway. Legume score! 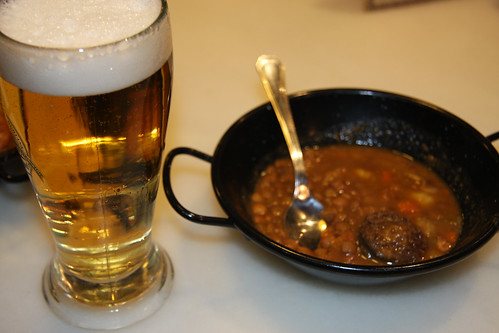 Afterwards, we found an Italian pizzeria and took a seat. I needed a restroom, so I asked the waiter, "Los baños?" To which he responded, "I don't know, I've never used one." To my confused expression, he said, in English, "Up the stairs and to the left," and then repeated it in Spanish in case he'd misguessed my identity. Throughout the meal, we watched him joke jovially with all his customers. His sense of humor was superb. Poking fun, but careful not to offend. When later he asked if I'd found the restroom okay, I told him, "No, so I just peed in a corner." That sort of response was all he needed to open the humor valve with us. When he asked us a yes/no question, we responded, "Oui oui," and he immediately switched to fluent French. We said "Danke!", and he switched to fluent German. Turns out the guy is a polyglot with at least eight or nine fluent languages who claims to only know them from traveling. And somehow he's a waiter (owner?) of a pizzeria in Vigo. Crazy! 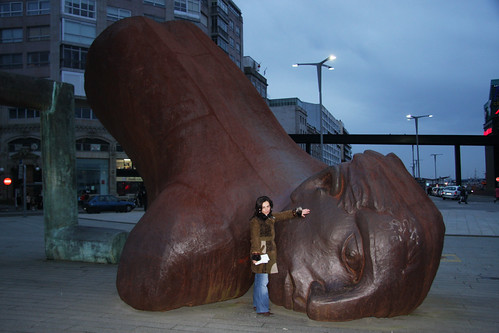 Marga thought this "faceplant" sculpture could use some cheering up. 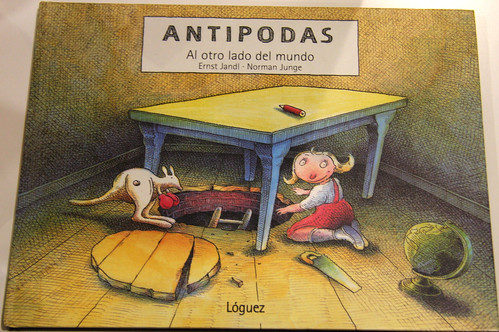 We stopped in this children's book store to look for books for Nora, but many of them were in gallego, the Galician language. This one caught my eye. I didn't learn the word antipodes until I was 25!

During our walk on Friday evening, we stopped by the tourism office, but it was closed. We did see, however, a poster advertising the 517th annual Festa da Arribada in the nearby town of Baiona. After consulting a friend from Vigo on Saturday morning, we decided to go see the 517th Festa da Arribada.

Exhausted from walking all day on Saturday, we found a nearby restaurant where we could have a mariscada, a platter of local shellfish. In general, I find shellfish annoying because it feels like you're burning more calories to get at the dang meat than the meat is providing you. And one of the (dead and cooked) crab's natural defenses actually drew blood from my thumb. I ate him anyway. 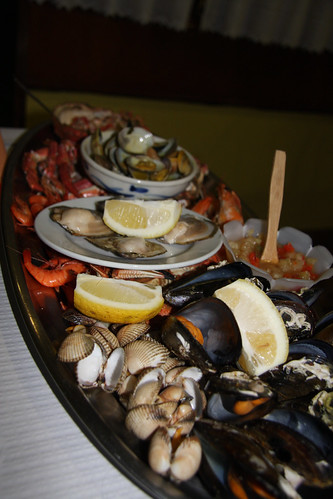 On our way back east on Sunday we picked a random town at lunch time and decided to stop to eat. I did some iPhone magic to investigate restaurants, the town's population, and info on history of the nearby castle while we were still 30 km away. We ended up in Podunkville, Galicia, in a town called Verí­n. They say you can see Portugal from the hilltop castle. The restaurant that Google lead me to was non-existent, but we asked a local pastry shop girl, and she directed us to an amazing little restaurant hidden in a dark corner of town. We took the opportunity to have one last pulpo a la gallega, the traditional Galician octopus dish, and some fantastic lamb chops. 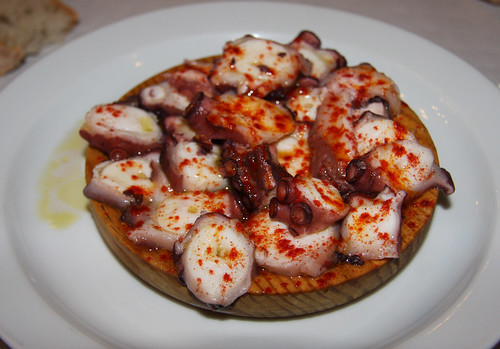 Pulpo a la gallega is boiled octopus sprinkled with olive oil and paprika.

Tummies full, we headed the rest of the way back home, where our little Nora was waiting for us with her grandparents.