Yesterday, I was informed that Nora was expected to be at daycare at 9:00 this morning, dressed all in white, and with moisturizing cream applied to her face so that her face could be painted and she could be dressed as a snowball and paraded around the streets of town. It's the annual Carnival parade, the time of year when Spanish kids, who have never had the Halloween costume tradition that American kids enjoy, get to dress up as various adorable things and parade around looking cute. Since I'm always a good sport about trying out traditions of my adopted country, I was there at 9:05 sharp with Nora dressed all in white, and my camera and video camera with empty memory cards and full batteries. Upon entering the daycare, I noticed it was absolutely crawling with little kids. Nora normally attends only in the afternoon, and most kids only go in the morning, so there were many new faces. Nora preceded to freak out. Eventually the afternoon caregiver that knows Nora took her off my hands and I mentioned that I was free to stay and help out. She seemed pleased and directed me towards a room in the corner of the building. There I found a dozen or so parents standing around waiting, not talking to each other and looking about as clueless as I felt. Some were drinking some coffee that had been served. For lack of anything better to do, I served myself a plastic cup of coffee and took a cookie. 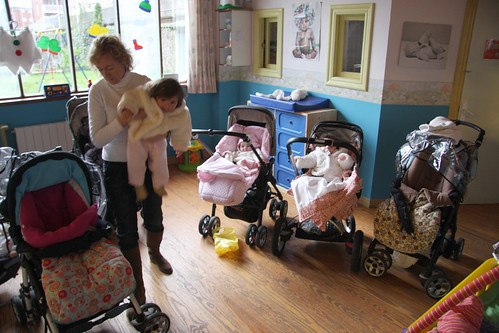 This woman was charged with pulling strollers one by one from the crowded stroller parking area, and matching them up with the kid they belong to. I'm still not sure how she did it.

After a few minutes the head of the daycare entered and asked if we'd remembered to put on facial cream. Many parents claimed to not have heard of this requirement, but I beamed with the pride of a student with all his homework done. To those uninformed, she handed around a tub of Nivea and I watched in confusion as the parents applied the cream to their own faces, muttering under my breath how rude it was to be using cream clearly provided for use on the children for themselves. Right about then was when the white face paint and adult-sized plastic snowman costumes were brought into the room, and out of my mouth popped a profane exclamation in English.

Even though I was already wishing the heating was a little lower, we were instructed to go put on our winter coats so that we could put our plastic bag costumes on over them. It took me a while to locate Nora's stroller in the rearranged mess of about two dozen strollers; I got on my coat, and returned to find many of the parents with white faces already. 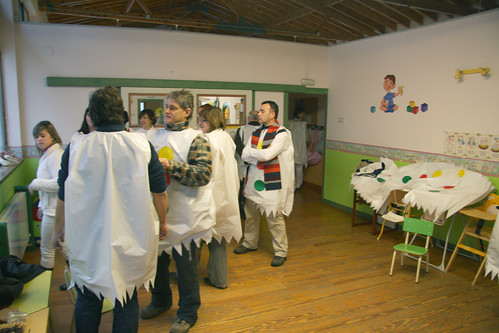 The grown-ups formed a more orderly queue to have their faces painted than the toddlers...barely.

One guy, who later turned out to be the designated photographer for the whole event, had a camera almost as expensive as mine, so I asked him to take some pictures of me as I got whitened. 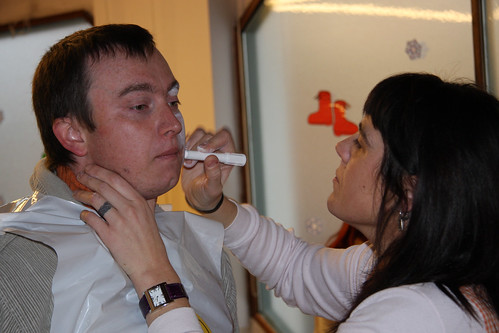 Because I needed to be whiter. 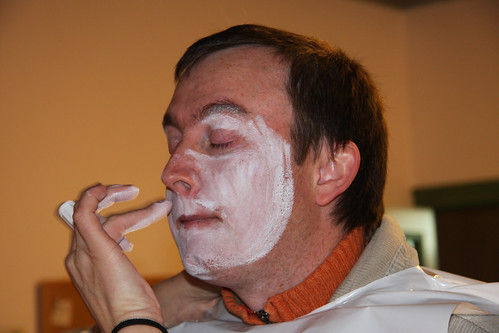 I would have shaved if I'd known someone was going to be rubbing my face. 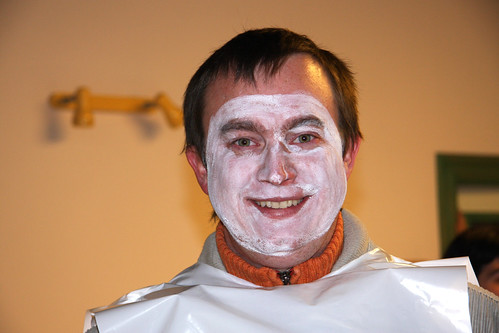 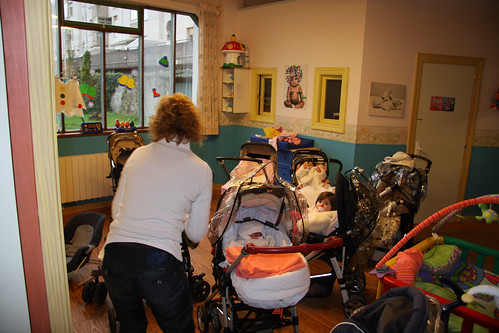 Meanwhile the baby-to-stroller matching was progressing. 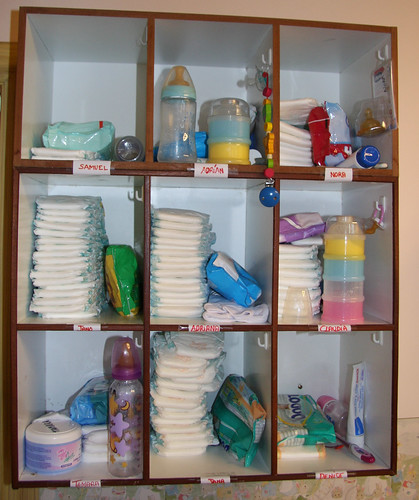 I couldn't resist a shot of the cubbyholes. Each kid has their own diapers and wet wipes and bottle. 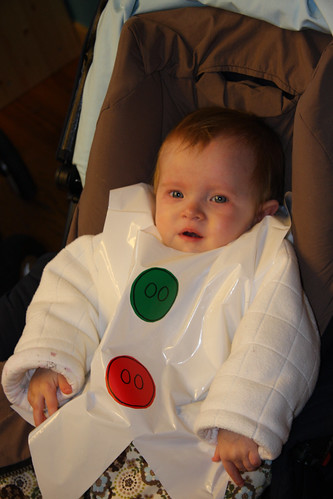 Nora The Snowball, waiting for nose paint. She was the last to get painted.

Finally we were told to find our kid and take them outside. 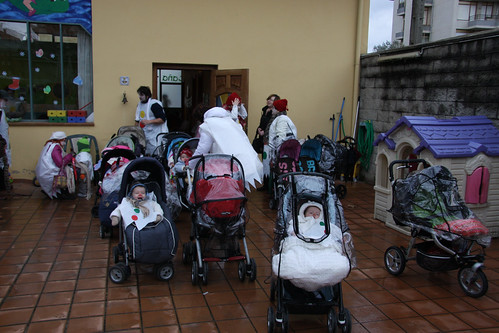 That was about the time it started snowing. Luckily it only lasted for about five minutes. 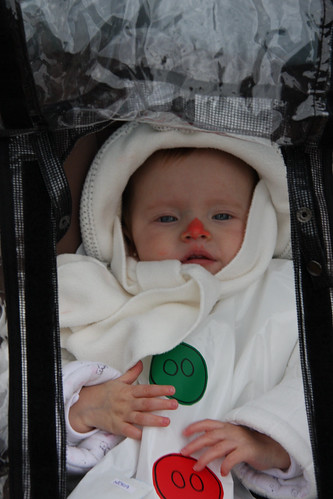 With her carrot colored nose, cozy in her plastic stroller bubble.

Right about this time they came out with the carrot noses for the adults to wear. 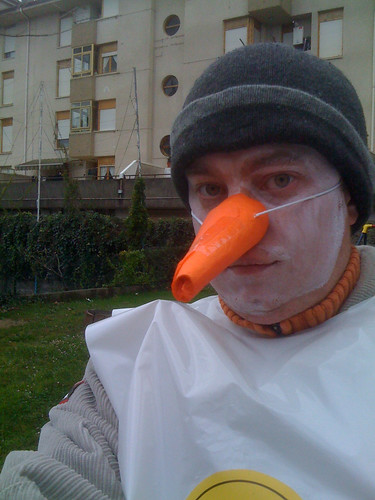 And then we were off! 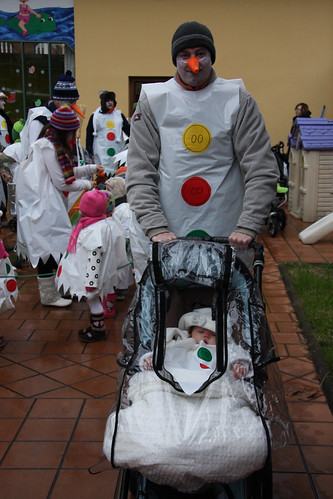 Papa Snowman and his little Snowball. 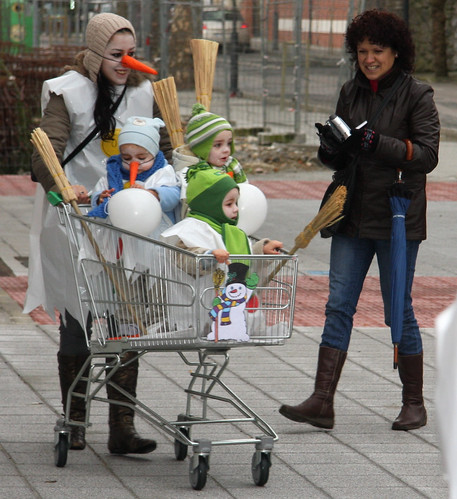 They had an interesting solution for the kids without stroller drivers. Carpooling! 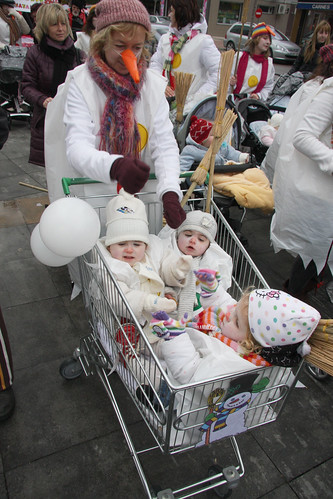 Looks like it was "Buy two and get the third free!" at the local baby store.

We then proceeded to walk to another daycare center, where we found a bunch of kids and their parents dressed up as Mickey and Minnie Mouse! From there we continued to a central church square where an elementary school joined in with a medieval theme to their costumes. The three united, we all walked to the center of town where loud music was blaring and we walked in a circle about five times before returning to our daycare.

This photographer Mickey made me smile. 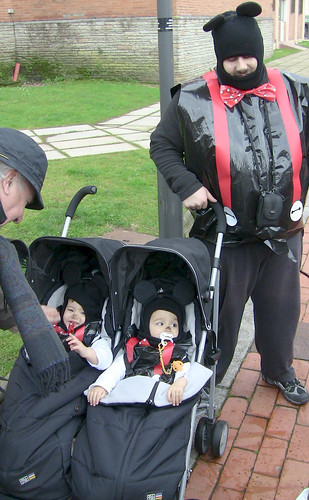 As did this Daddy Mouse and his little mice. 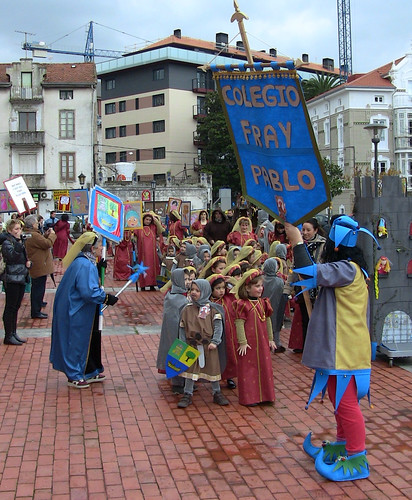 The medieval knights and damsels sang a song (see video below).

It was around this time that Nora, who hadn't been very happy about any of the unusual events of the day, started to look like she had the flu, an effect exaggerated by her now smudged nose paint. 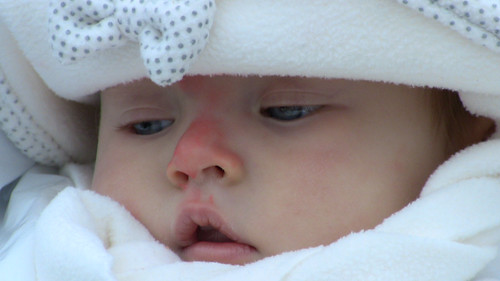 Not a happy snowball.

When we got home, she was burning up with a fever. She never once opened her eyes as she ate her lunch, moaning the whole time. I gave her some children's paracetamol and finally got her to take a nap. After her nap she still had a fever, but I took her to daycare anyway. Eventually she got better because she ate a large quantity at her afternoon fruit meal and no longer had a fever when she got home. It was a long and exhausting day. I suspect this parade will be considerably more fun next year when she can walk along with the rope-holding kids, and even more fun the year after that when she can anticipate the excitement.

Here's a short movie that begins with Nora getting her nose painted very much against her will. Sorry for the quick camera movement in some shots.

There are more photos than I could post available here.