My little town has two photographer shops and two framing shops. In both, the shop windows are filled with examples of their work that has recently been finished and is waiting to be picked up. The main frame (computer joke) shop is right downtown and I walk by there every day. Usually they have certificates, caricatures, cross-stitched scenes, puzzles, and occasionally a painting or two. Yesterday, as I was glancing at what my fellow townspeople were having framed that day, my brain registered that there was something very wrong about one particular certificate. The text reads, "Second prize, shop window competition, 2009". See if you can spot what's wrong. 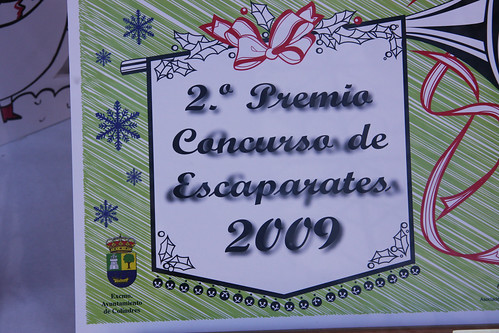 Normally, when you're creating a drop shadow for text in Photoshop, you add your text to the document in its own layer, and then you apply a drop shadow "layer style" to that layer. What's nice about this is that, as long as you don't rasterize the layer, you can go back and edit the text, and your drop shadow will be edited as well.

Another way to make a drop shadow, particularly for objects and rarely for text, is to make a copy of the layer you want to shadow, fill it with black, apply a Gaussian blur, lower the opacity, and move it a bit away from the original object. This has the downside that, if you go back and edit your original object or text, the drop shadow will not change.

The problem with this certificate is that the text reads:

but the drop shadow reads

So clearly they mistyped it, leaving out the "at" in escaparates (shop windows), then copied the text to make the drop shadow, and only then noticed the misspelling. What really killed it was that, once they added those two extra letters, they had to change the wrapping to include de on the second line, thus making the error glaring. D'oh!