Yesterday, as I was digging through my coins to pay for a cool European lager, I happened to glance at the artwork on the heads (Or tails? Who can tell anymore?) side of the coin. At first I thought it was some kind of joke currency or bizarre token that someone had slipped me in mistake or trickery. So I saved it, pretty sure it couldn't be real. But lo and behold, it's a special 2009 commemorative 2€ coin. To quote the Official Journal of the European Union (PDF):

The centre of the coin shows a stylised human figure whose left arm is prolonged by the euro symbol. The initials Î“Î£ of the artist appear below the euro symbol. The name(s) of the issuing country in the national language(s) appear(s) at the top, while the indication 1999-2009 and the acronym EMU translated into the national language(s) appear at the bottom.

These coins are to commemorate ten years of economic monetary union. And to show unity, this stupid, stupid design that looks like it was drawn, badly, by a four-year-old is going to be used on the national side (the side where union countries normally celebrate their unique identities) across all countries using the Euro. Ugh.

Interestingly, in Luxembourg, their national law prohibits the minting of any coins without their Grand Duke's portrait, so, using ridges so you can see two different images depending on how the coin is tilted, their version of this 2€ coin will show both the silly stick figure and The Duke. Those crazy 'bourgers! If their country was any larger, their wacky laws wouldn't be so darned cute. 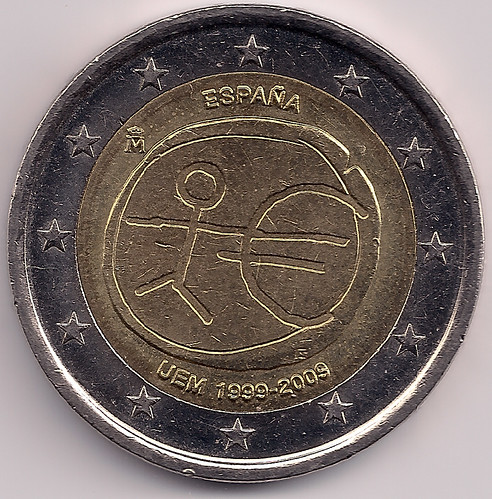