For pretty much all of December my wife's family has been pressuring us to leave Nora with them for Santo Tomás (December 22), a huge festival in their town of Mondragon involving special seasonal foods, getting dressed up in traditional Basque clothing, traditional Basque music and dancing, and a crafts and livestock market. The main reason they wanted her was to dress her up in some traditional Basque clothes. Some part of our human brain finds it incredibly adorable to dress up a small child (or chimpanzee) in clothes we associate more with adult humans. The main reason we let them have her was because, isolated with no extended family here in Cantabria, she often has problems with strangers, and for the big festive night of the season, Christmas Eve, we knew she would have to be around a lot of aunts and uncles and cousins, and we knew she'd freak out if we arrived that night and plopped her into that sea of doting arms. Sure enough, everyone reported that for the first day or two, she didn't want to be held by anyone but her grandparents, but slowly she warmed up to everyone and even got used to strangers poking at her. Success!

At home, alone, Marga and I enjoyed some peace and an overwhelming lack of responsibility, getting things done that would have taken four times as long with Nora, and even going out until 3 AM for the price we'd have had to pay a babysitter for that time.

Everyone was nervous about the reunion. They sat us down side by side like game show contestants and then, after an interminable wait, brought Nora into the room. The flash of surprise and joy we were hoping for never happened. It was more of an "Oh, hey guys," expression. I was both glad and sad that she didn't miss us that much. 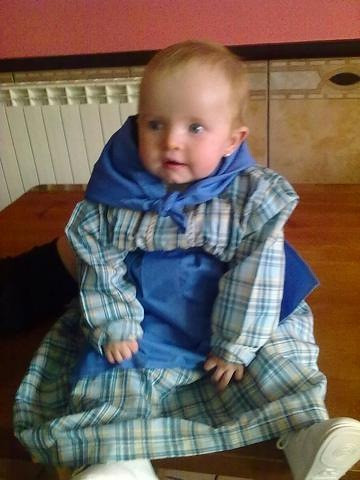 Nora in her Basque Santo Tomás outfit, which should be good for at least another year. 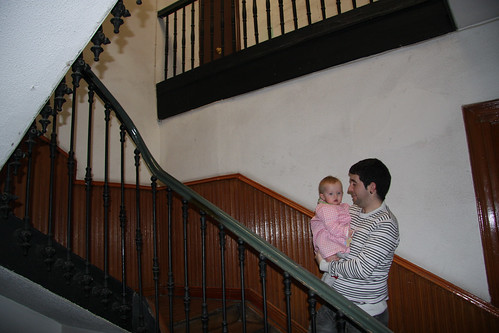 Going up the stairs with Cousin Rubén. 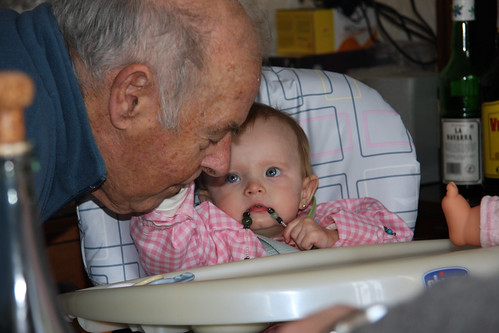 Soon after Christmas Day, the "You're going to leave her with us for the rest of the year, right?" and the "You can't take her away from us now!" and the "It's only like two days from the 27th to the 31st!" comments began. My first reaction to these was, "Of course we're taking her!" and "Wait, why should I be visiting my daughter only on weekends?" 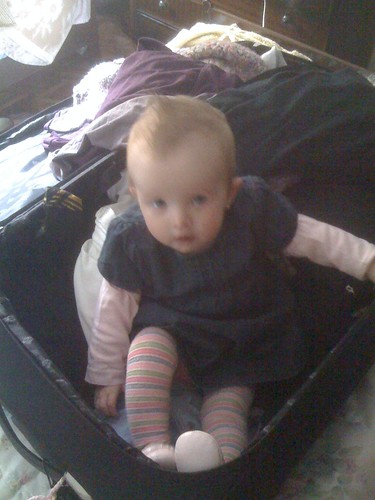 This way Mommy and Daddy can't possibly leave me!

In the end, it came down to two things: 1) I foresee Nora spending this last fortnight of most years with her grandparents in Mondragón, so why not start with the first one? and 2) Not having her around for another four days will be difficult, but bearable, but will bring so much joy to her grandparents, and it's a rare occasion when I can bring that much joy to people I love.

So sorry, kiddo, you're not coming back home this year.