by erikrasmussen, on Flickr")Just when I had almost forgotten about the First Annual Tapa Week from last December, it rolled around again and we celebrated the Second Annual Tapa Week this past week in nearby Laredo, Spain. I must say that this is quickly becoming my favorite festival of the year. There is little better in this world than going from bar to bar with friends and enjoying a fine wine and an elaborately constructed snack with each wine.

And it's not just that I'm a glutton for...er...gluttony. As I mentioned last year, there are several reasons why I am in favor of this festival as a general local citizen. It gets people out into local establishments, spending money and applying social lubricant, it provides a stage for local restaurateurs to showcase their craft, and it generally makes for a more contented populous. Triple win! As with every Version 2.0 of anything, there were certain noticeable improvements. Last year the participants voted for their favorite tapa (a.k.a. pincho in Northern Spain) by sending an SMS text message with their mobile phone. Just as you might expect, the winning bar was the one with the most mobile-enabled friends willing to pay the texting bills. This year, in each bar, they stamped your brochure, certifying that you had purchased the tapa there, and only once you had eight stamps collected could you vote for your favorite. This way each vote was made by someone that had sampled at least eight tapas in each of the seventeen participating bars.

A scan I made of the brochure (view large). The official PDF is also available from the Laredo Town Hall.

The pricing was the same as last year: 2€ with young wine (cosechero), grape juice (mosto), or small beer (penique), or 2.50€ for a better wine (crianza) or larger beer (caña). This pricing structure uses a simple psychological trick to make people buy the more expensive option as the difference in drink quality is much greater than the difference in tapa-drink combination price. Not that I was affected, as I'm a crianza snob anyway. 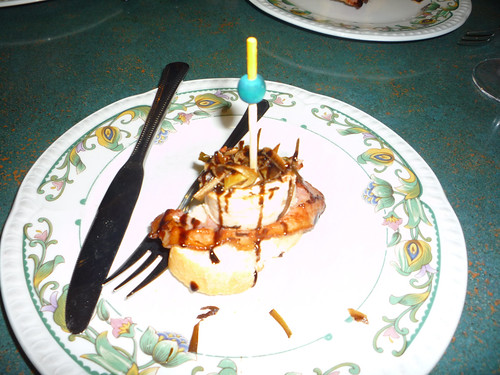 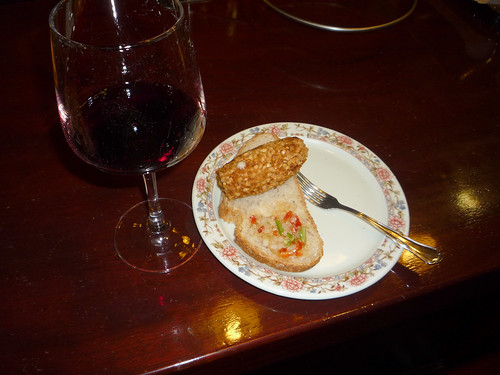 Croqueta Colón (Columbus Croquette) from Cafeterí­a Colón - kangaroo croquette with an almond crisp. First of all, yes, it was actually kangaroo meat!! I asked the waitress, "So do you just go down to the local kangaroo slaughterhouse or what?", to which she replied, "I dunno. But there's a place in Santander that sells kangaroo meat." "Imported?", my father asked, cheekily.

I should explain about the translation from Colón to Columbus. Apparently one of the many things left out in the total lie told to American school children about Christopher Columbus discovering America is the fact that his real name was Cristóbal Colón. I wonder where the "-umbus" came from? 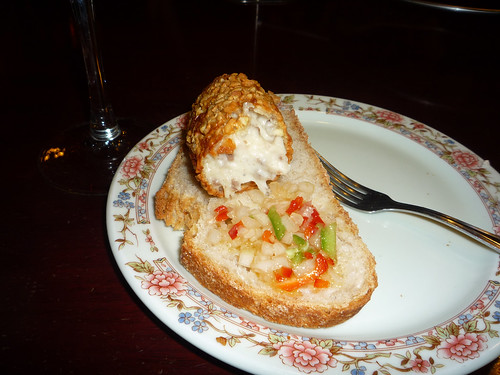 by erikrasmussen, on Flickr") The creamy insides of the kangaroo croquette. The combination of the nutty almond exterior with the hot creamy interior was fantastic. I only wish I could have tasted the marsupial. It was a little like a Hot Pocket. Get it? Marsupial??? Oh, nevermind... 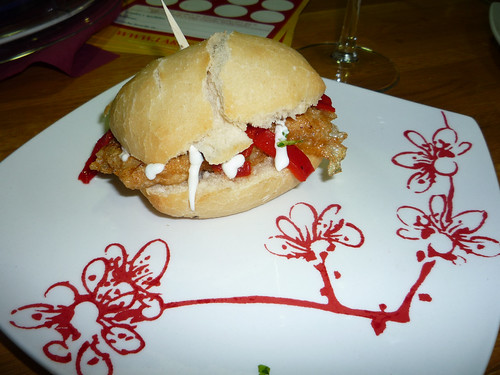 El Echu Gí¼ela from Bar La Viña - chapata bread, a bed of piquillo peppers, galayu a la romana, with mayonnaise and parsley. Apparently galayu is a local fish from the Cantabrian sea. This tapa was good, but it was more or less just a fried fish sandwich. 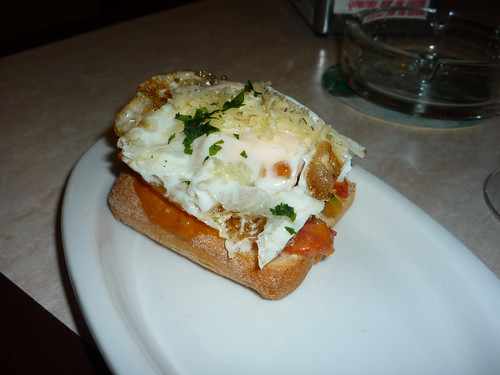 La Huerta Pejina (Pejina Garden) from El Sinfo - a base of chapata bread, a mixture of red peppers, green peppers, and onions, with a fried quail egg and finely grated cheese. The name, La Huerta Pejina, is the name of a local fruit and vegetable store. Last year the tapas given by El Sinfo were our least favorite, and this one marked a significant improvement. The quail egg is a nice touch, as they are the perfect size for a small tapa. 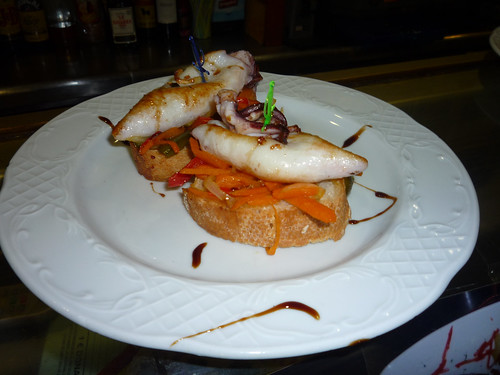 Jibión con piperrada (Cuttlebone with Pipérade) from Restaurante El Guti - squid with a pipérade of vegetables. This tapa was fantastic. Unfortunately I didn't realize that there were two squid on my bread, so when I took a bite, the other one slipped away (as squid are wont to do) onto the floor, evoking in me the timeless human emotion of the dropped ice cream cone. Later in the week I had dinner at El Guti and the owner, who is a friend of mine, gave me a few more. Delicious! 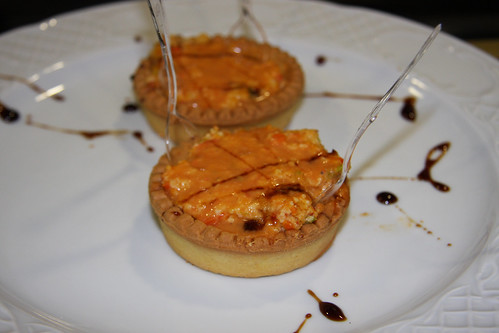 Delicias de Marisco (Seafood Delights) from Restaurante El Guti - vegetables in seafood sauce bathed in prawn cream. The filling of this little pie was wonderful, but the crust was way too sweet for my tastes. I heard a fellow diner announce that she could eat a million of them, so to each his own, I suppose. 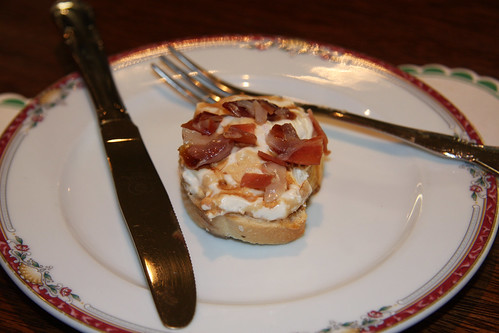 Cremoso (Creamy) from Restaurante Emperador - cream cheese, dried fruits, and a Pedro Ximenez reduction. Also, as you can see from the photo, there was some unadvertised Spanish ham on top. At the time, I had no idea who this Pedro guy was, but The All-Knowing Internet has now informed me that it is a type of white Spanish grape. As I have said before, "There are no foods that you cannot improve by adding cream cheese," however, as a tapa in this competition, a big dollop of cream cheese on a slice of bread is just lazy and the taste is too rich. A weak entry. 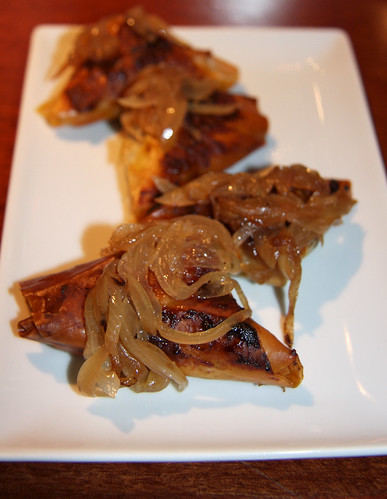 La Marina Company from La Marina Company - Iberian pig rib with homemade barbecue sauce. The description doesn't really match the photo, does it? The tapa they gave us was crispy like a Chinese spring roll, and inside was meat and a sweet sauce which very well may have been pork and barbecue respectively, but I was expecting to be licking some rib bones. It was very good, despite being very different from my expectations. 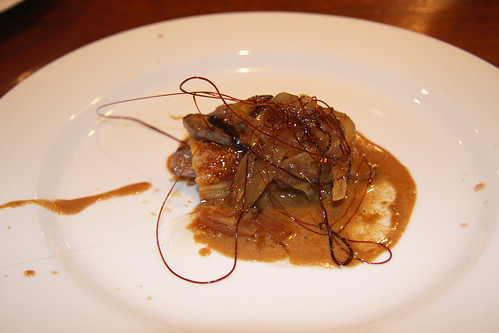 by erikrasmussen, on Flickr") Milhojas de Solomillo (Sirloin Pastry) from Bar El Curro - a pastry base, sirloin steak, caramelized onions and glazed with caramel glass. Last year El Curro was the maker of our favorite tapa, and this year they definitely won for the best presentation. This one was delicious. 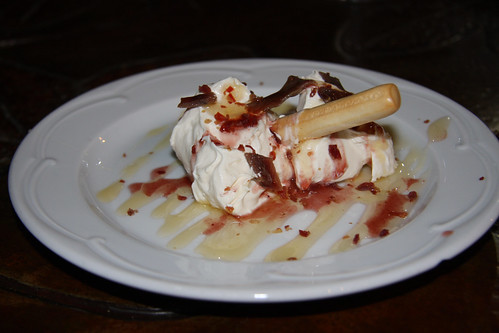 Crónicas de las Garmillas (Garmillas Chronicles) from Mesón Restaurante La Abadia - cheese mousse, champagne jelly, Spanish ham shavings and raspberry sauce. Garmillas is a local town known for their dairy production. Talk about an ingredients list! Unfortunately, high expectations often lead to disappointment, and they did in this case as well. The first two spoonfuls were amazing, but then you quickly get tired of eating something so sweet and rich with your red wine. Definitely the biggest let down of the week. 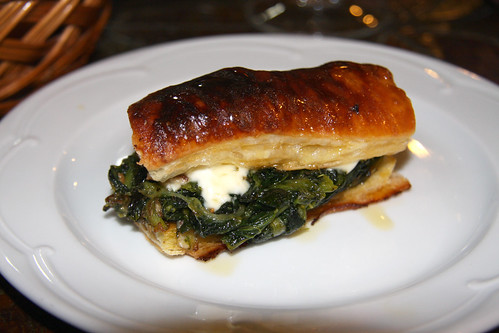 Something-er-other with respigos from Mesón Restaurante La Abadia. This restaurant only had one official tapa in the competition, but when we got there they told us they had two, so two of us got the cheesy one, and two of us got this respigo sandwich. Respigos are a local spinach-like delicacy. I did not try this tapa, so I cannot comment on it, but it looks like it would go better with wine than the champagne jelly one. 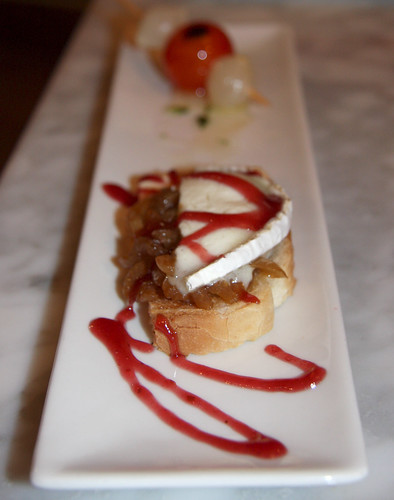 Capricho Atalaya (Atalaya Whim) from La Atalaya - goat cheese, caramelized onion, cherry tomato... The ellipsis is actually on the official ingredients list. I really loved this tapa, but then I'm a sucker for goat cheese. A good strong cheese on bread with a glass of wine is my idea of heaven. So simple, and yet so delightful. 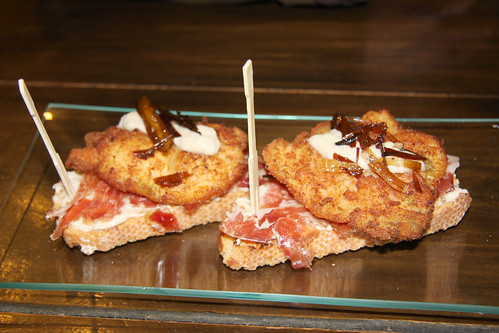 Mar y Tierra (Sea and Land) from La Casona - stuffed shrimp, cheese, and bacon on an Iberian ham bed with wild mushroom cream. We ate this one first on a particularly windy and cold outing, and the warmth it gave us was wonderful. I'm not sure what the shimp, cheese and bacon were stuffed into, exactly, but it was like a little fried patty. The mixture of mushrooms, ham, and cheese was delightful. 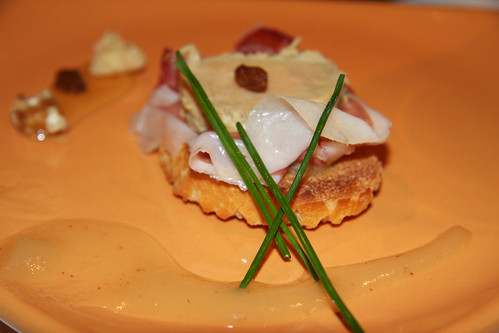 Sexta Fantasí­a (Sixth Fantasy) from El Cartago - Spanish ham, foie, apple sauce and nuts. It was good. My wife particularly liked it since she's a big fan of foie. I was just sad that this was our last tapa of the competition. 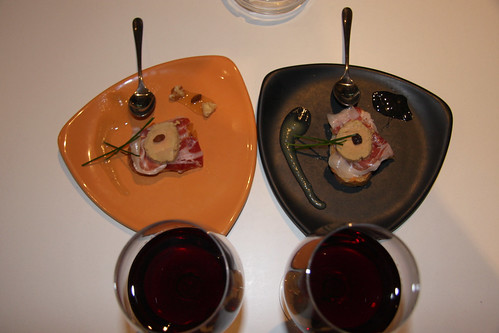 Our two Sixth Fantasies from above. Since it was a cold tapa, they had them all prepared behind the bar and could whip them out right when you ordered them.

And the winner is...

I don't know who the official winner of the week's competition is yet. But if I had to pick a favorite, it would be the Croqueta Colón. Over the week in our various outings I ended up eating three of them, and it was wonderful every time. And how often do you get to eat kangaroo meat? Second place would be the Sirloin Pastry from El Curro, and third would be the Cuttlebone from El Guti.

Between my parents, my sister-in-law, my wife and me, we filled up (8 stamps) four cards and ended up with three others with stamp counts of 3, 3, and 5, for a grand total of 43 tapas eaten. Not bad, huh?

My stomach is already rumbling in anticipation of next year!