by erikrasmussen, on Flickr")Last night at eleven o'clock our power went out. I'm unfortunately accustomed to this because our circuit breaker is incredibly weak and about twice a month flips to the off position out of sheer laziness. So I got up to flip it back on, but it was already in the on position. It was at that point that I noticed how dark it was outside the window. After fumbling through the darkness towards the window, I looked out into the blackness. It had been raining with low clouds all day, and there was no light reflecting off the clouds from Colindres, nor from nearby Laredo or Santoña. The entire region was blacked out! Thankfully, I still had my iPhone so that I could complain about the blackout on Twitter! I immediately set about setting up my tripod, camera, and intervalometer to capture some long exposure shots of the town. Unfortunately, the views from my house are pretty boring, but I did what I could. 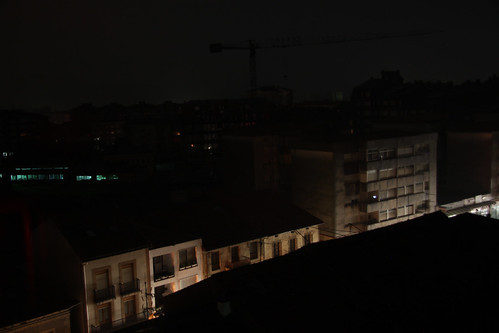 This was my first attempt, a two-minute exposure, aimed down at the main thoroughfare. All the light in the photo is coming from car headlights. 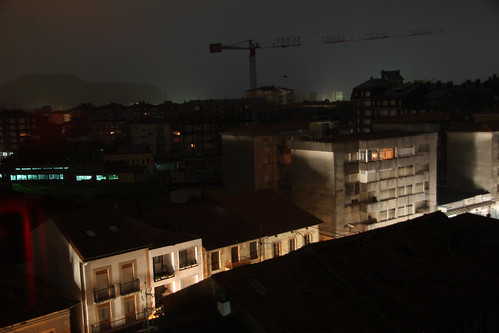 Here, I left the shutter open for eight minutes. You can clearly make out the crane and even the familiar shape of Mount Buciero, the mountain in the background. 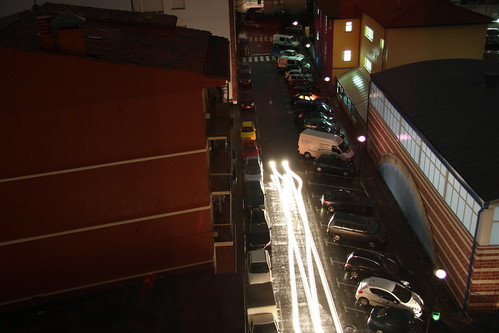 Finally I aimed it down my street, and took a nine-minute exposure. The school on the right had some backup lighting, which is why it looks so alive. While the shutter was open for this one, the power came back on, but I was able to close it before the street lamps warmed up to full power.

Now if only the power would go out when the sky was clear! That would be awesome!

Just for the record, I blame Guy Fawkes.