My mother asked me some questions about Nora via email, and I suspect that many of you may be wondering the same, so I'll answer them here.

How is her eating coming along? Still just veggies or has she tried fruit?

She still has vegetable puree every day for lunch, although lately we've been mixing in some chicken, too. The next batch will have some beef. She started eating fruit puree for an afternoon meal last Saturday. Like the veggies, we started right out with a medley of apple, pear and banana. She liked it okay, I guess. I don't think she was very hungry at the time, though. While I don't understand the processes, the nutritional science expert in the household assures me that you can't just keep fruit puree in the fridge until the next day like you can with vegetables, so I was more than happy to wolf down the remaining uneaten portion, even though it was lacking some tequila and a cocktail umbrella. On Sunday we missed the fruit course because we extended a walk too long and when we got home it was bath time, not fruit time. And starting on Monday she's been having fruit made and fed to her every day at daycare. The fruit feeding is a very nice service.

Everyone we talk to is shocked for one or all of the following reasons:

Apparently it depends on who your pediatrician is. I suspect the "how do you start with non-milk foods?" issue is a member of the extremely lengthy list of "stuff parents fret over but in the long run mean diddly squat".

Does she sleep through the night?

Sometimes. As I'm writing this sentence, it's 8:42 in the morning, and I got up at 7:50 because she let out a scream and I figured she was probably hungry. But when I got back to her with the bottle of formula, she was asleep again. She ate last at 9:30 last night.

But today is an exception. Normally we have to do one feeding somewhere between the hours of 1:00 and 4:00 at night.

How does she get along at school?

Fine, they say. Her mother is the one that drops her off and picks her up normally, and she says there's a little girl that, when she goes to pick Nora up, informs her of everything that happened to Nora during her stay there. It's not like you can make friends at Nora's age, but she seems to be accustomed to being with the caretakers and children at the daycare.

How heavy and long is she?

Well, the doctor at her six month appointment didn't write down her weight and didn't measure her length. Hold on, I'll be right back. ... Okay, I just weighed her on the bathroom scale and did a quick length measure by lining her up with the edge of her changing pad, which she barely fits on anymore.

Is she rolling over now?

Nope. She still can't get that arm out from under there.

Scooting on her belly?

Nope. When we position her arms correctly for her, she can push up a considerable amount of her upper torso off the ground, but there's no knee coordination. The truth is that she doesn't spend that much time prone since she doesn't really like it and she can't get that way by herself.

She does quite a bit of scooting around while on her back somehow, though. And recent evidence suggests that she controls this movement intentionally. See photographic Exhibit A below.

This is the one activity that we regularly practice with her. She's up to about 20 seconds of unaided verticality, but those times are rare. Her mean unaided sitting time is closer to 3 seconds. With just one hand holding on to us she can be sitting for more than a minute, and she's content to spend up to a half hour propped up sitting on the couch. I'd be surprised if she could coordinate sitting up and playing with a toy before Thanksgiving.

Nora is getting increasingly more manipulative, and by that I mean screaming bloody murder when our actions don't please her. She absolutely despises being placed on her activity mat because she knows that that is a place of abandonment. After crying for five minutes fails to get her in someone's arms, though, she happily plays with the more than half dozen toys she has there.

The television continues to be an omnipotent drug. Yesterday, for example, Nora was crying for reasons I could not determine. I thought it might be her teething, so I rubbed some soothing gum gel the pharmacist recommended on her gums. Nothing but more screaming. Holding her and walking around the house, which is what she is usually demanding, wouldn't calm her either. Nor singing to her. But putting her on the sofa and turning on some trashy daytime talk show? It was like morphine. Calm and happy, even laughing, probably at her control over her old man.

I'm aware of the risks of "letting the television raise your child", but both her parents are users of this particular drug, and it's not like alcohol or caffeine where you can be in the same room with someone and one person be using the drug and the other not. We'll just have to find our level of moderation.

The other day we left her on her changing pad on the floor and went to go cook some lunch. From the perspective of the photograph, she was lying on her back with her feet pointing towards the camera, her head towards the television, and the changing pad was parallel with the coffee table.

Five minutes later, we return to find this: 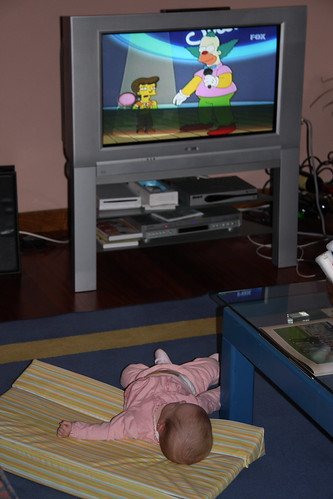 Oh, she knows how to orient her body when she wants to! That's for sure.