I intentionally left out details about the food we ate in my posts about our trip to Bordeaux a week ago mainly so that I could combine the photos into this one mouth-watering post.

The truth is that we ate way more than we usually do and came back feeling bloated. In the week since we've been back, we've been nearly fasting, and feeling much better. On the night of our arrival, Friday, we were tired from a week of work, so we just walked down to the closest restaurant to our hotel, a pizzeria. I had a "4 Fromage" pizza, and Marga made do with just a side salad.

For lunch on Saturday, our travel agent had booked us at Chez Fernand, right on the river in the center of Bordeaux. We sat outside on the street. Marga ordered the foie gras, the wild sea bass, and the chocolate cake. I had oysters, a goose leg, and a fig-based dessert. 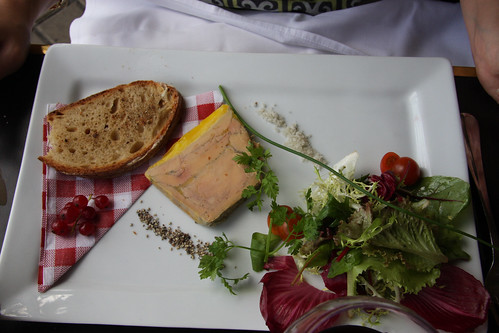 Marga's foie gras. The presentation was impeccable. Those two lines that look like cocaine ready for snorting are salt and pepper. Foie gras is not the prettiest food in the world, but this plate is gorgeous! 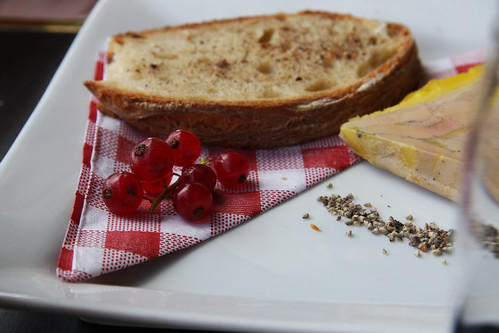 The red berries on the red and white napkin was a clever touch, I thought. 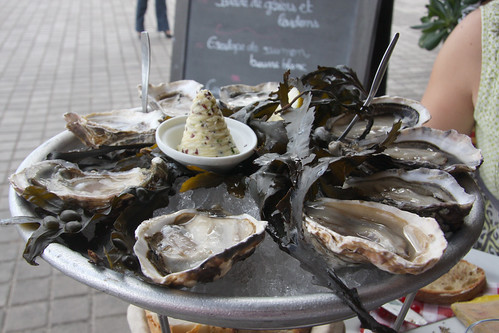 My plate of nine raw oysters on a bed of ice. The tower in the middle was a spiced butter that I couldn't figure out what to do with since it was so hard. I didn't eat the seaweed. 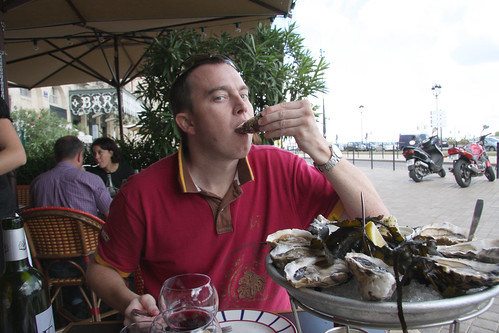 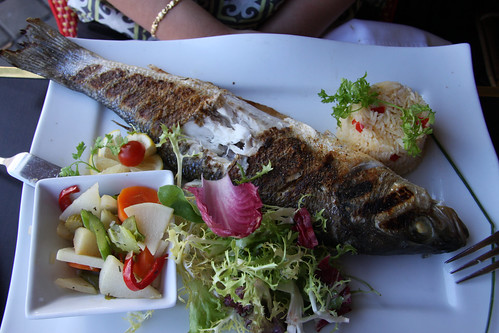 Marga's grilled wild sea bass, which the waitress claimed was fished locally. I was unable to get a photo of it before Marga attacked and took a big chunk out of the middle. The spices and taste were delicious. 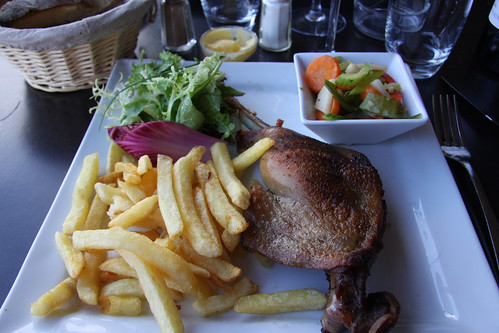 My leg o' goose. Wonderful taste. The mixture of cooked vegetables in the upper right was surprisingly delicious.

Look at that, I didn't even make a French fry joke! 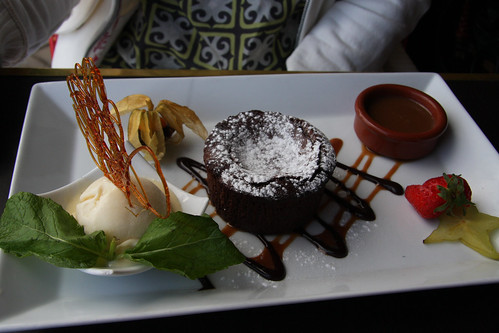 Marga's chocolate cake with a side scoop of ice cream. Also with a strawberry and passion fruit with a chocolate sauce to dip them in. 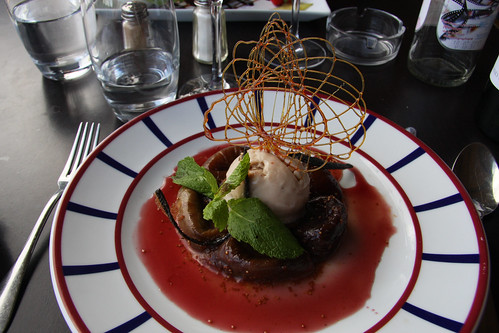 Figs on a bed of ice cream and port sauce. The caramel hood ornament on top was a nice touch. 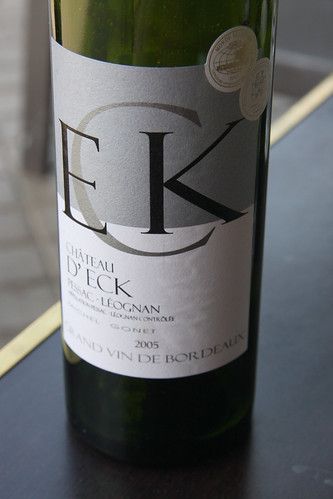 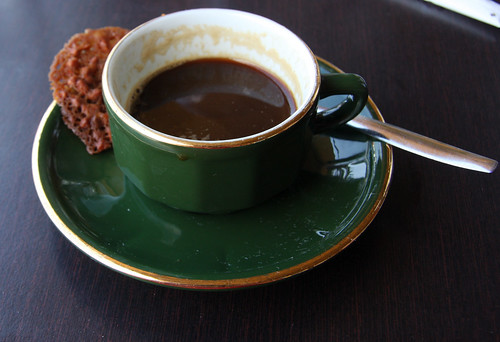 We finished with a black coffee and a cookie.

On Saturday afternoon, our travel agent had booked us a complimentary (already paid for) canelé, a specialty pastry of the Bordeaux region. 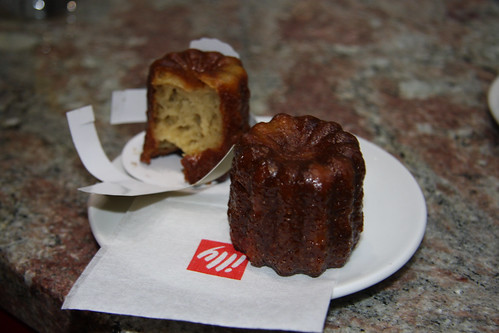 It was very nice with the coffee. Better than your average muffin, that's for sure.

On Saturday night we were too exhausted from the tourism and still full from this wonderful meal, so we skipped dinner entirely.

On Sunday, in Saint Émilion, we had lunch at L\'envers du Décor, a nice restaurant in the touristy center of the medieval village. Unfortunately, I only got a shot of my seared tuna starter, the wine bottle, and the cheese course at the end. And I already can't remember the rest. Sigh... 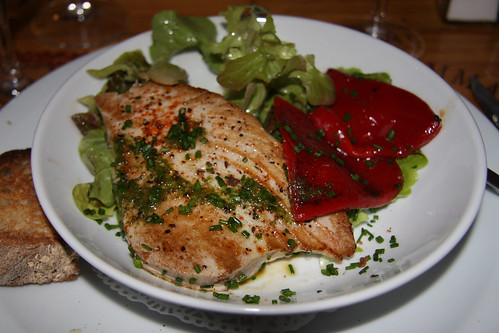 It was completely raw in the middle, and the spices were amazing. It was sort of like semi-sushi. 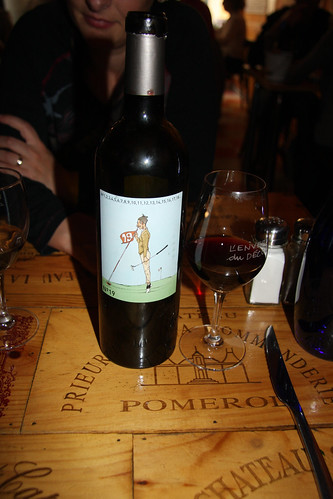 We ordered the cheapest wine on the menu and got a No. 19, which was quite good to our peasant tastes. The golfing joke with the name and label is referring the golfing slang, "the nineteenth hole" (there are 18 holes on a golf course), which refers to the bar at the club house after the round. The tables were covered with wine boxes from local chateaus. 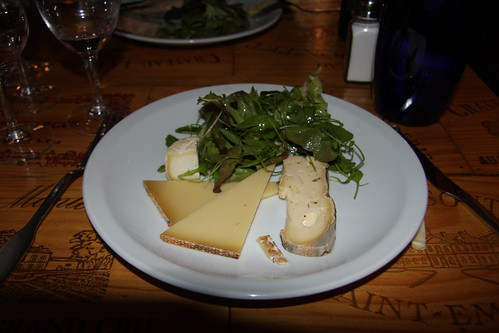 The cheese course would have been better if we weren't so stuffed already. It was delicious, though.

For dinner on Sunday, we weren't too hungry so we tried to find a cheap restaurant, which turned out to be a fairly American-styled joint with musical instruments and sporting equipment nailed to the ceiling. I started eying the pizzas on the menu when I noticed something called flammekueche. I had never seen that word before in my life, but from the context of the menu it looked similar to a pizza, given the toppings available. For some reason I had my eye on the "4 Fromage" flammekueche. We asked the waiter what the heck a flammekueche was, and he said "It's like pizza, but with cream instead of tomato sauce." Without thinking this new information over, I went ahead and ordered the four cheese flammekueche. This turned out to be a big mistake as it was like a big fromagey overdose and I could only eat less than half. Still, though, I am very intrigued by the tomato-less pizza concept.

On Monday, in St. Jean de Luz, I had a fish soup and some chiperones, which are little squid. In Spain, I'm used to eating them in their own ink, but these were in a nice mixture of fried peppers and potatoes. 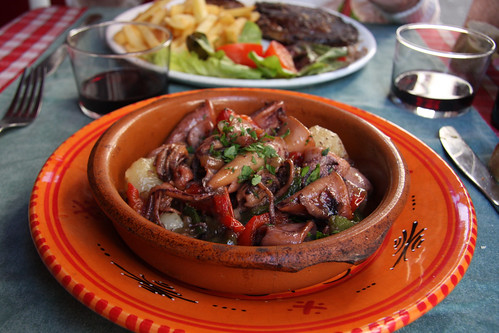 by erikrasmussen, on Flickr") Marga had a steak, as you can see over there.

The French gastronomy was one of the aspects of the trip that I was most looking forward to and that I most enjoyed.