The future's so bright...

The first thing Spaniards notice about Nora is the color of her eyes, as only a very small percentage of the Spanish population has blue eyes. Unfortunately, this means she is also very sensitive to direct sunlight.1 When we go outside and sunlight hits her face, she squirms and cries. I feel her pain. A larger-than-I'd-like-to-think-about percentage of my childhood group photos with classes and sports teams features my scrunched up squinting face.

We consulted the doctor on when it's appropriate to buy a kid some sunglasses. She told us that six months was awfully young, but that if you wait until ten months, it'll be hard to keep them on. Meaning that when a kid is older, they are more aware of how they are used to being outdoors and will dislike the change, but if you sneak them in early and they get accustomed to wearing them, then it's easier later on. So the other day I bought Nora some sunglasses...and I must say, when we put them on her, she's one cool cat. 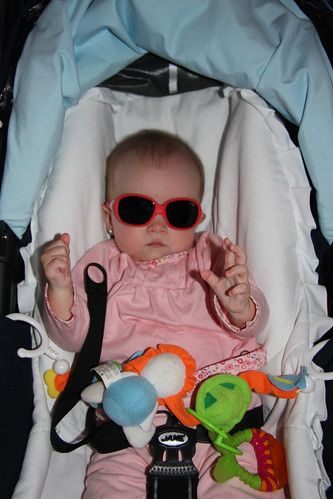 Got a bright future. 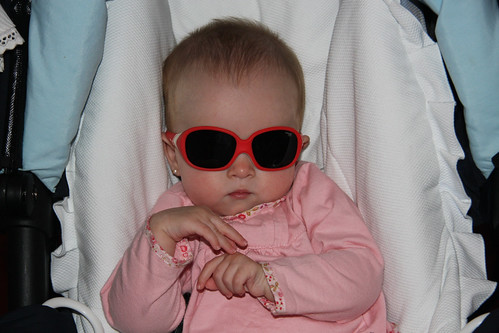 Yo yo yo! I thought she was gonna whip off a bebop scat rhythm. 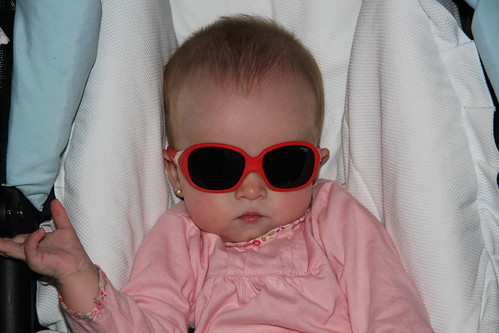 Put that camera down and let's get this buggy on the road, Jack! This thing don't push itself!

1The concept that fair-eyed people are more sensitive to light is often repeated, but Marga pointed out the other day that it's not entirely clear why that should be. It seems easily like something that could have been made up and then taken advantage of by us wimpy fair-eyed folks. An internet search turned up this medical journal article that apparently you have to pay to read. From what I can gather, the hypothesis is that the same Rayleigh scattering that makes blue eyes (and the sky) blue also means that more of the light is bouncing around inside the eye causing more irritation than for those people with more opaque irises. I've asked Aardvark for more information, but I'm not too hopeful. Any more theories or explanations about why blue-eyed folks are more squinty?