On Sunday, October 11, 2009, we drove 50 minutes east of Bordeaux to the small medieval wine village of Saint Émilion. They began making wine in that area in the second century! The town was founded in the 13th century when a monk – perhaps you can guess his name – decided to spend the last fifteen years of his life in a cave. Although Saint Émilion is known more for its wine making, almost more impressive is that it is the home of the largest monolithic church in all of France. What is a monolithic church, you ask? It's a church built with only one rock. How do you build a church with only one rock? Rather than build it with stones mined elsewhere, you simply mine out the inside of the church, and voilí , a church built from one rock! The extra benefit is that you end up with a bunch of mined rock, which you can sell to pay for the labor costs. Genius. The fact that this church was built/mined in the thirteenth century, the same time that the Knights Templar were returning from The Holy Land where they have many monolithic structures like this is no coincidence We arrived about an hour before our tour was to begin, so we got to walk around a little beforehand. When they say it's a medieval town, they really mean it. Our tour guide explained that they have ordinances requiring any new construction to use the same materials as the half-millennium old structures around it, so the town is very homogeneous. In Saint Émilion, our tour guide, Isabela, was fantastic, especially compared to the one the day before in Bordeaux. She explained things very clearly and very interestingly. I particularly liked the skepticism twist she put on the tour. She would say things like, "We have no physical evidence that a monk named Émilion actually existed, but historians agree that his existence is the most simple explanation for the organization and cohesion of the monks that built the church and founded the town." The monk was never canonized, but the townspeople called him a saint anyway.

This is a very photo-heavy post, so I have split it into two posts. Let's begin, shall we? 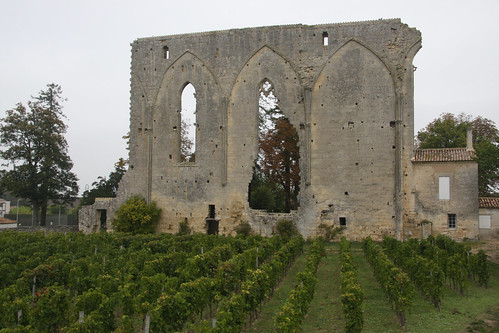 The ruin of an old church on the edge of town where we parked. Notice the grapevines. Just about every square meter of space around the town is used to grow grapes. 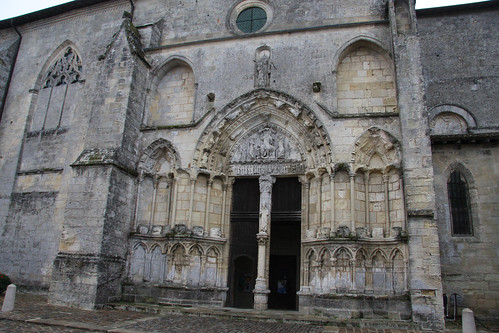 A church. (not the monolithic one) 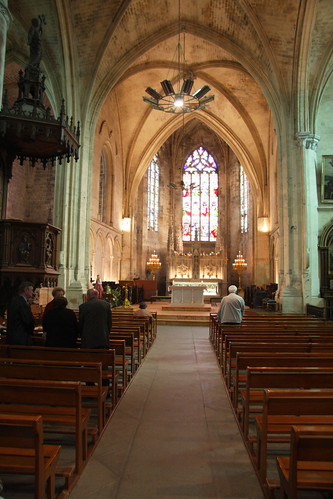 by erikrasmussen, on Flickr") Inside the church, mass is going on. It was Sunday morning, after all! 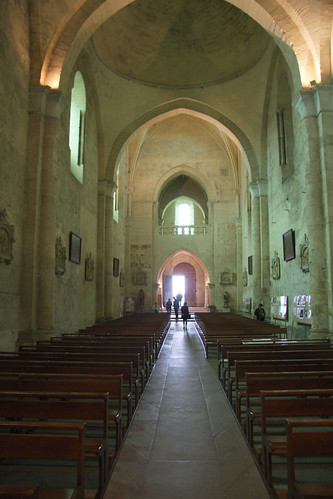 A 180Âº turn from the previous photo. 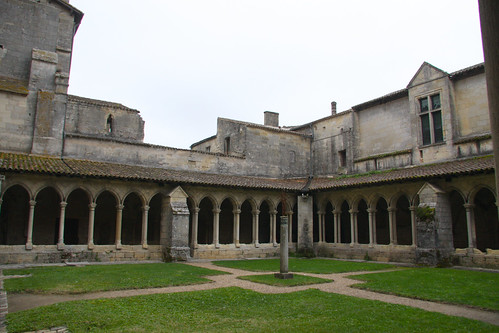 The church courtyard, which we later discovered was connected via a door to the Saint Émilion Tourism Office. 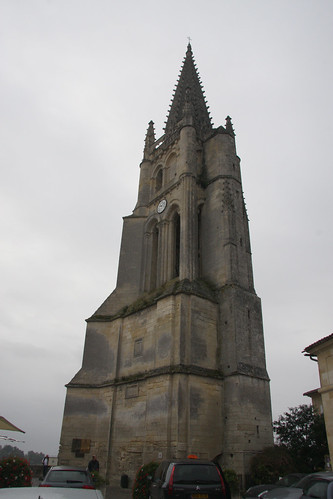 The Saint Émilion bell tower. Little did I know that we would later in the day be entrusted with the key to the bell tower and climb up the 192 steps to the top. 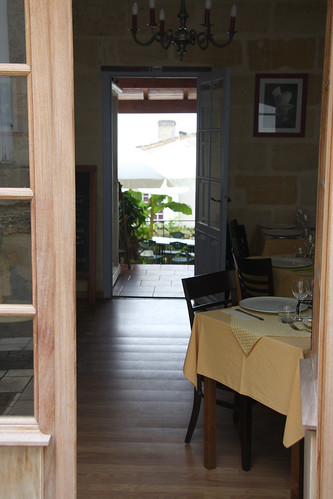 This restaurant seemed very, very French to me. From out here on the street, anyway. 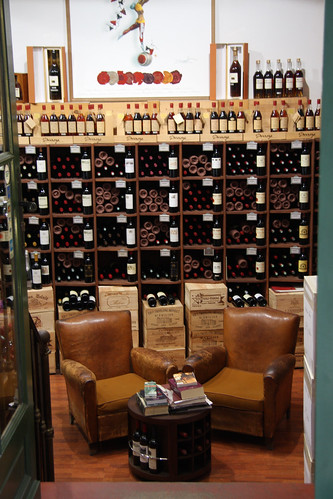 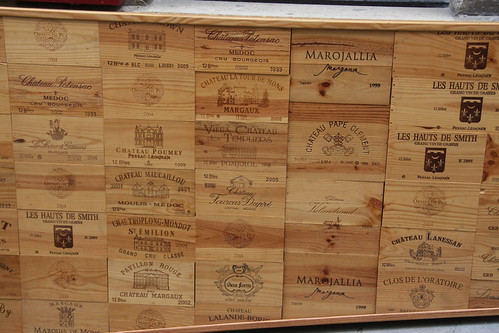 Another wine shop, with a facade of wine box covers from various chateaus. 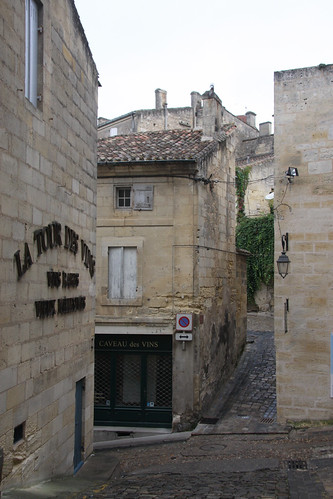 Some of the streets were incredibly steep. 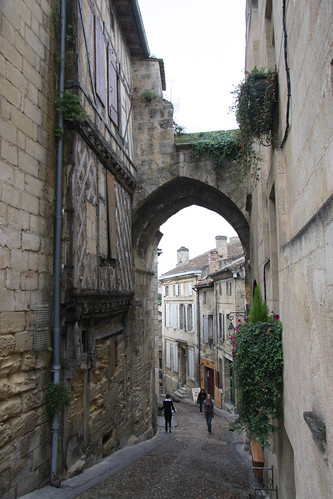 It doesn't look as steep when photographed. Check out the timbered house on the left.

The first place our tour guide took us was up onto a hill to look over the city. View large. You can clearly see the homogeneousness of the town. The tower on the left was built by English occupiers to keep an eye on stuff. Now it's used for the head wine honchos to get together and decide when to harvest. 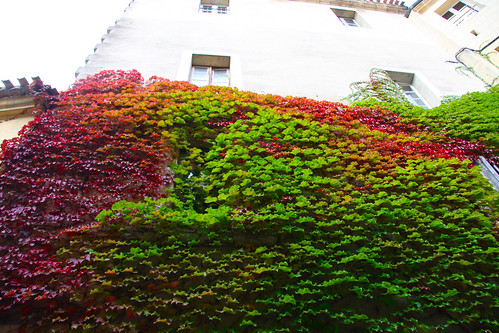 What I loved about Saint Émilion was how you could be walking down the street, minding your own business, and then pass a view like this: 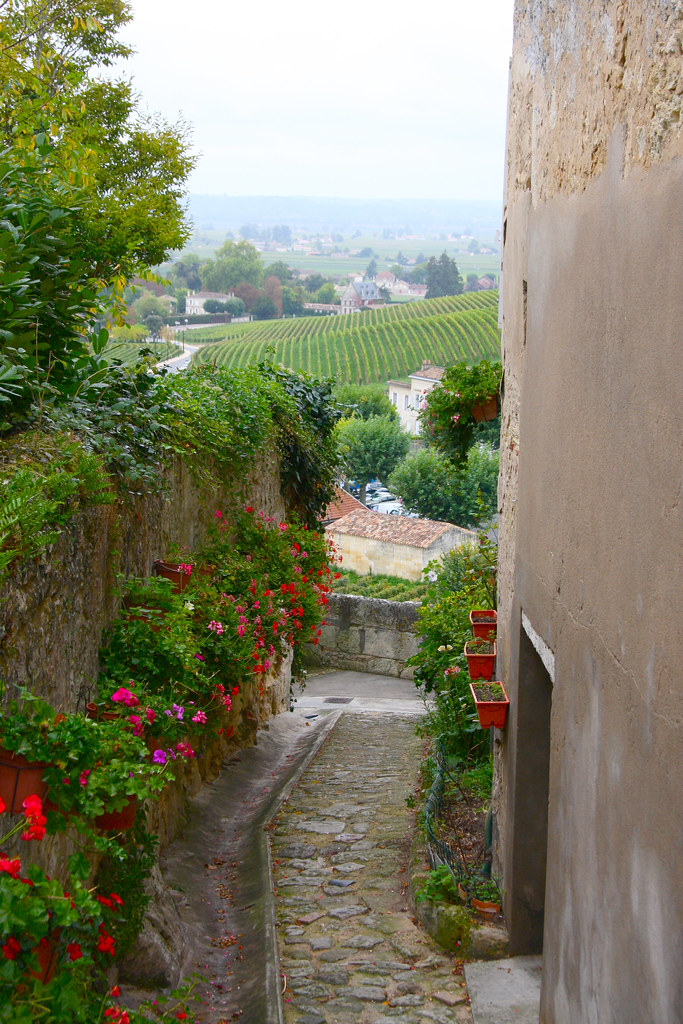 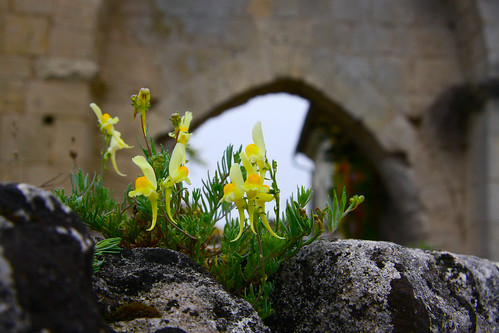 Flowers under the only remaining medieval gate into the old fortified city. Inside the walls, the population of Saint Émilion is 200. A lot of the houses, unfortunately, are falling into disrepair because French law requires that all owners of a house agree for renovations to take place and, after two or three generations since a house's original owner, inheritance law has resulted in some of the houses being jointly owned by over 40 distant cousins. If you've ever been to a family reunion, you know how tough it is to get even five cousins to agree on something as trivial as pizza toppings, so imagine forty on renovating a medieval house! 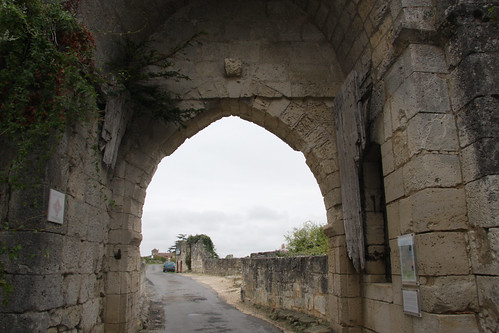 There are still some old rotting wooden doors hinged to the side of the gate. 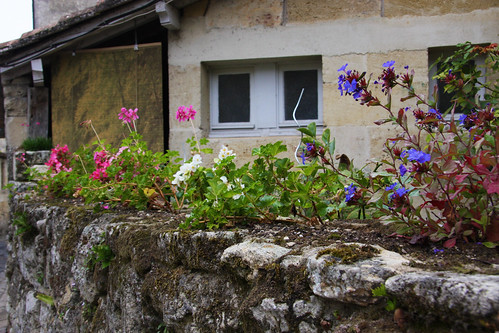 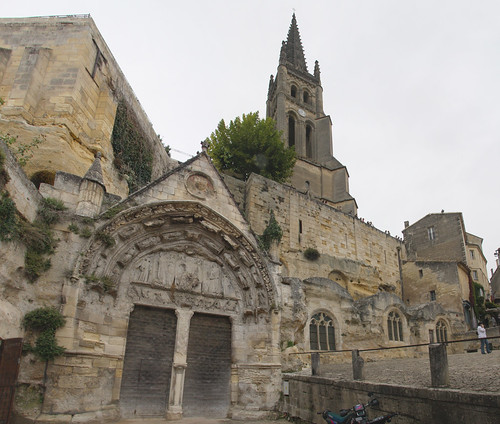 This is the monolithic church. Worth viewing large. My observant wife asked if the faces and heads of the figures over the arch had eroded over the years. The tour guide informed us that, no, actually the figures were destroyed by a bunch of angry Protestants that apparently didn't like the head of the Catholic Jesus. Religion can make people do mean things.

I wasn't allowed to take photos inside the church, but it was very cool, figuratively and literally. When we got out of the church, the tour ended. But our tour guide asked if we would like to go up in the bell tower. We said sure, so she took a skeleton key off her keyring and asked us to return it to the tourism office in an hour when it opened again at 13:30. And off we went to climb the tower! 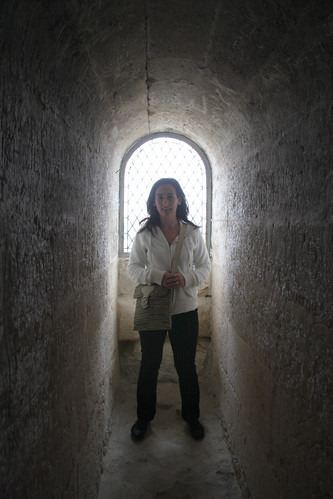 Stopping halfway up to look out a window. 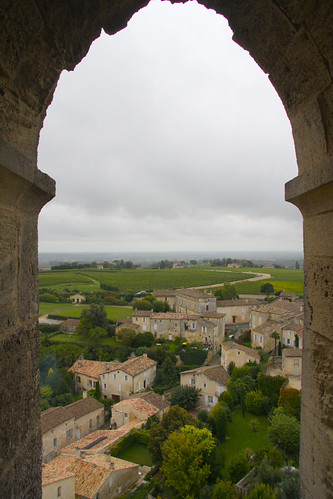 Looking off into the grape-covered horizon. 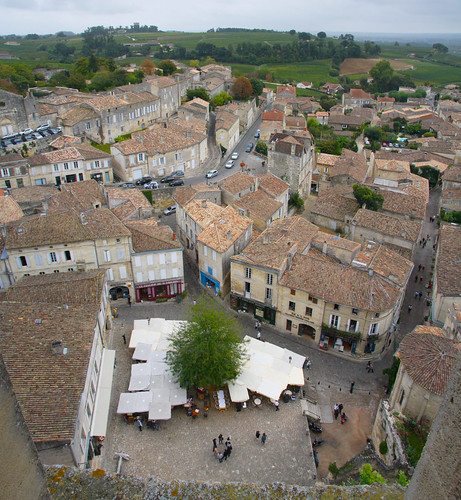 Up at the top, looking down to the square below. Another good one to view large. 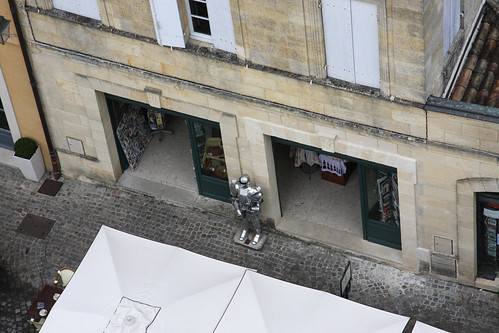 A knight guards a tourist shop. 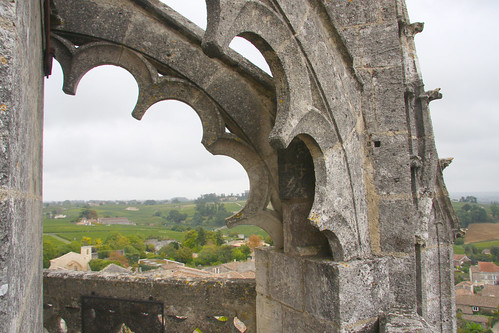 Decorations up at the top of the bell tower. 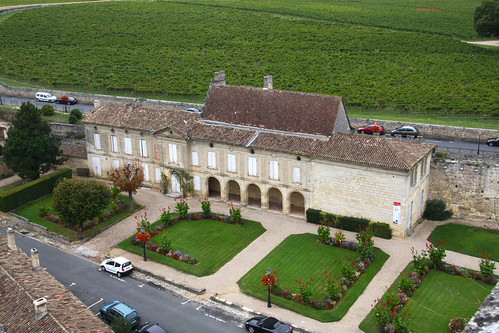 A panorama from the bell tower. A must for large viewing. The row of cars to the top left in front of the roofless monastery is where the tour guide took us to overlook the town and where the panorama above was taken. 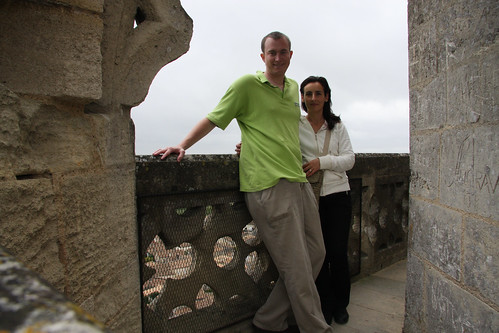 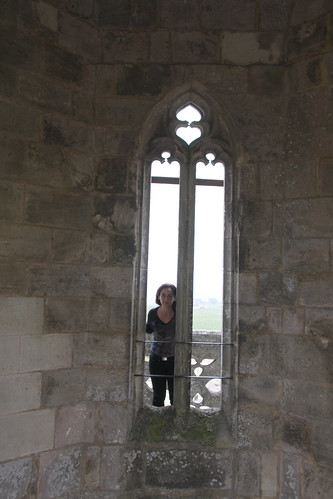 Marga on the other side of the bell tower. 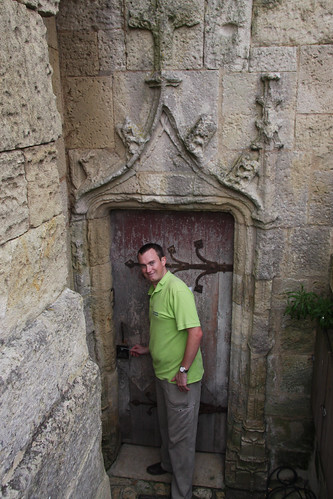 Keymaster locking up the door to the bell tower.

Then we had lunch at a great restaurant in the center of Saint Émilion called L'envers du Décor. After that, we had to rush to get to a local chateau for a tour and wine tasting.