This past weekend Marga and I left Nora (for the first time!) with Marga's parents and drove four hours up to Bordeaux, France. We normally don't go for agency-organized trips, but this time we did, since we had little idea of what to do in Bordeaux other than taste the wine. While the plan they laid out for us was not bad, it was impractical, as we often found ourselves rushed and arrived late to several tours. As a result, we've decided that we probably won't go with the organized tour route again. Overall it was a learning experience, and we had a good time.

I took so many pictures that I'm splitting up the events of Saturday in Bordeaux into two blog posts. Once you've trained yourself as a photographer to find interesting scenes in the ordinary landscape of your neighborhood, when you travel to a foreign country, everything is begging to have its picture taken!

Let's travel, shall we?

Our hotel, Le Chantry Hotel. With the exception of the crepe-sized blood-and/or-semen stain on the carpet of our room, this two-star hotel was very satisfactory, a mere ten minute walk to the center of Bordeaux. How disappointing, though, to look up the word chantry and discover that it's English and not French. 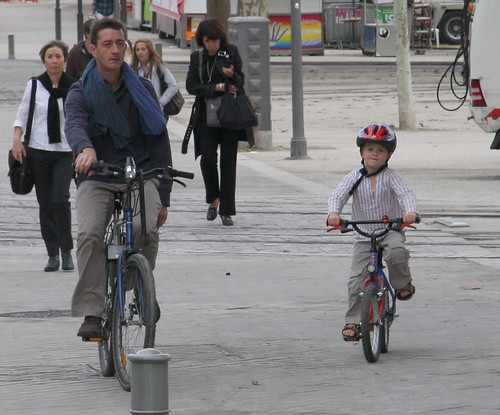 This father and son rode by as we were waiting in front of the Bordeaux tourism office for our guided bus tour to begin. 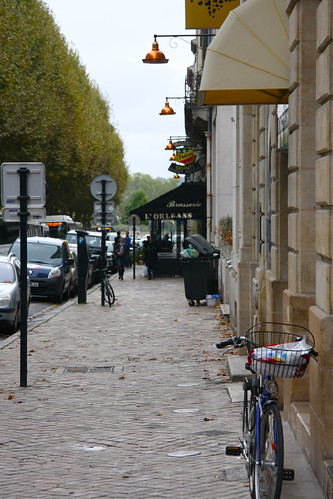 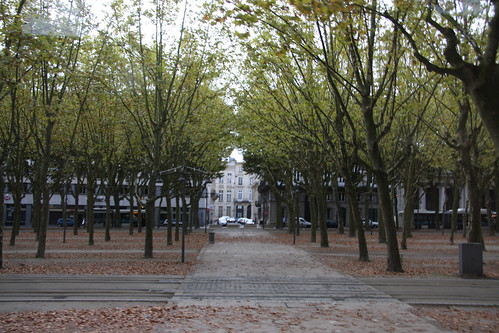 This wooded park was absolutely lovely. I think it will be even prettier next week as the colors of the leaves change. 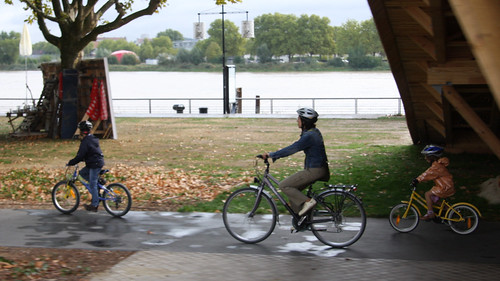 Another velocipede-enabled French family riding by the Garonne river.

Our tour guide was absolutely terrible. It was difficult to tell when she switched from French to English, and the English parts we did pick up were fantastically uninteresting, often about road construction newly completed or begun. There were, however, a few pearls in the stinking pile of oysters that was her tour. Once she drove us out to this abandoned dock area and the bus stopped. She spoke for about five minutes in French and then for about two minutes in English. This was the view: 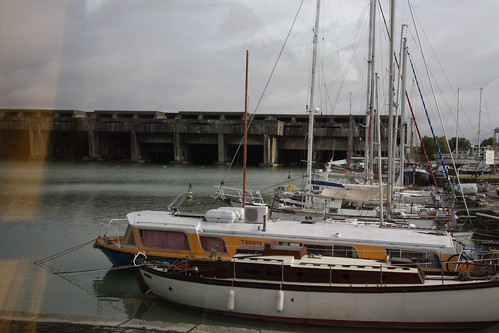 That horribly ugly concrete structure in the background is a Third Reich submarine bunker. Apparently the British did their best to destroy it, but were unable to. After the war, French demolition crews also tried to demolish it, but failed as well, declaring it indestructible. So they have decided to use it for concerts (don't ask me how) and other social events, adopting it into the culture of the city.

Interestingly, the tour guide never once used the term "second world war", a war which featured prominently in shaping the city of Bordeaux. She always called it "the 1940 war". I found this fascinating. They've named it after the year of their invasion. Can anyone confirm if this is common nomenclature in the French language? 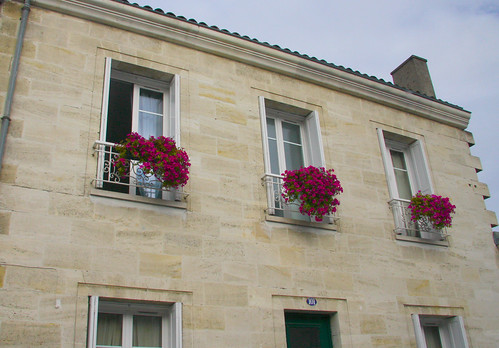 Some nice flowery windows. The entire city of Bordeax is made of limestone – there is almost no brick – so all the buildings are a shade between this color and the black sooty color that it turns over time. 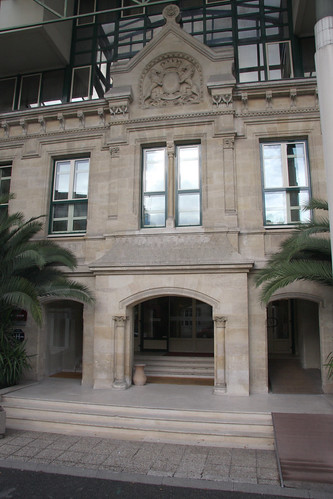 This house used to belong to one of the wealthy wine-making families. Now it's a fancy hotel. 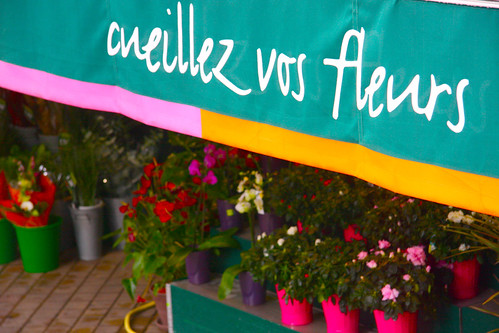 A flower shop, as seen from the tour bus. 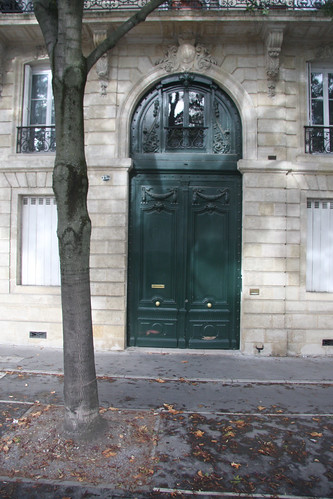 Many of the houses have these cool enormous wooden doors. 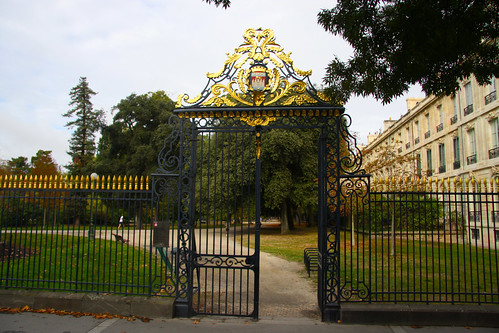 The gate to the city park.

On top of the gate is the city coat of arms. The guide told us what the five towers and crescent moon symbolized, but I've forgotten. 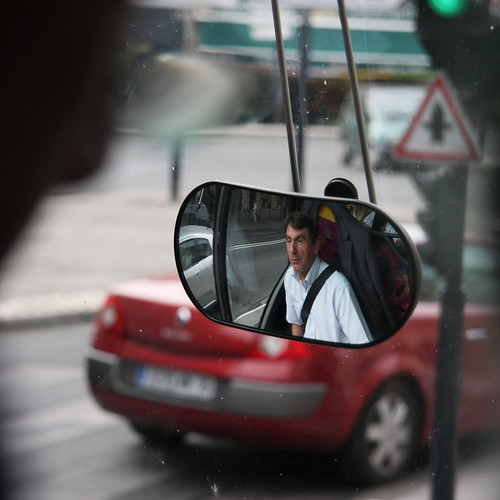 Our bus driver. I hope he was just blinking rather than driving with his eyes closed. 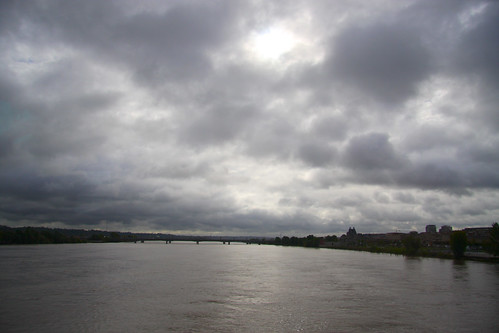 We took the Pont-de-Pierre over the wide Garonne River which runs through Bordeaux. The tour guide told us that the river is always a brown muddy color, even on sunny days, because of the high volume of suspended silt in the water. 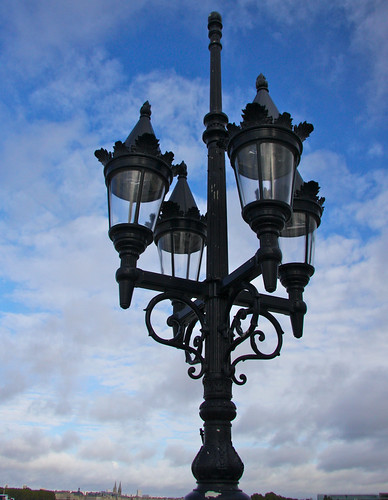 The clouds part on our way back over the bridge. These lamp posts were very nice. 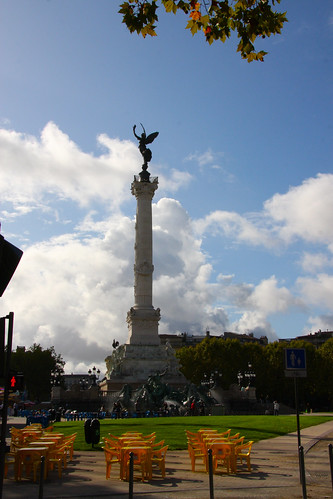 Statue on a pillar. 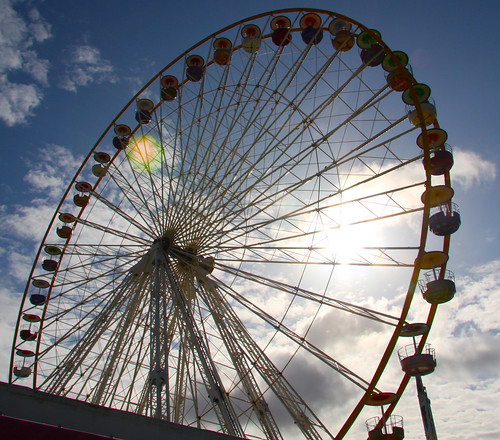 A ferris wheel for the carnival that was in town. 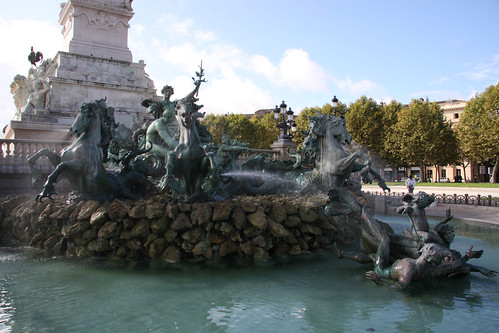 A truly bizarre set of statues in the fountain under the pillar. 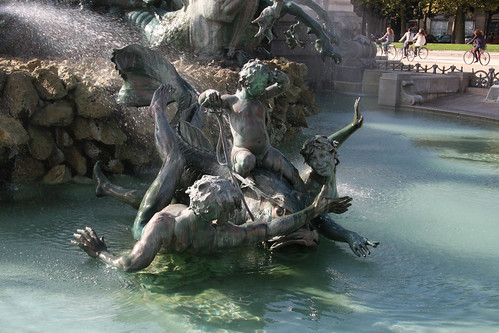 This kid is riding a big fish and clearly getting the better of the two adults around him. 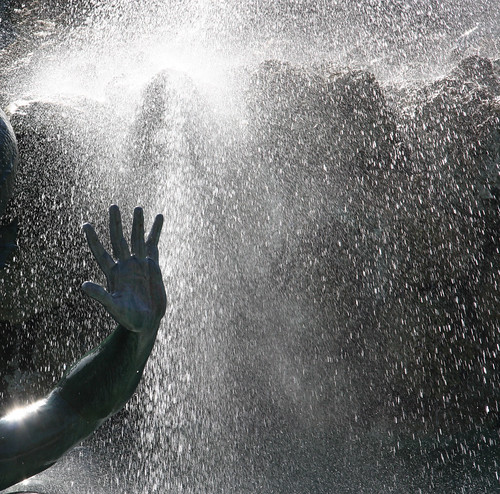 A bronze hand in a mist of fountain water.

This freaky beasts were half sea serpent and half horse. Marga called the mermaid horses. 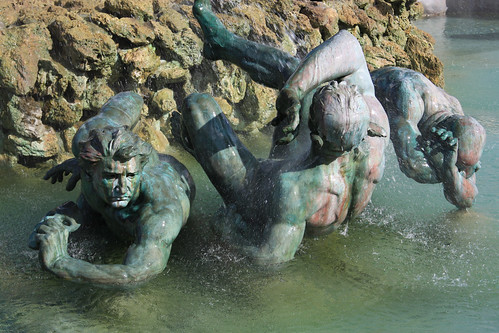 These guys are supposed to represent undesirable human qualities (I've forgotten which, as there are so many) and the water from the noble statues above is tormenting them. 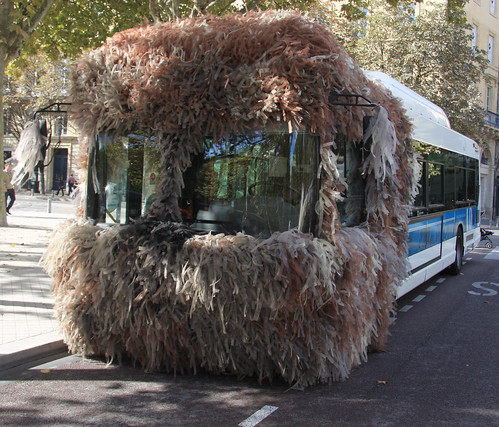 I call this The WTF Bus. All aboard!

This is the longest pedestrian street in Bordeaux. 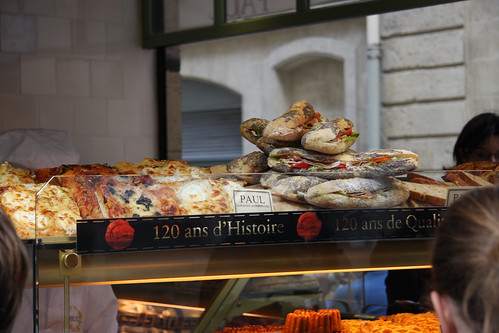 This concludes part one of this two-part post. Please eject the tape, flip it over, insert it again, and press play to continue...I'll wait.