One of the best things about autumn are the pumpkins. In Spain, there are very few round orange pumpkins that match the image that an American has when he thinks of a pumpkin. That's why it was so difficult to find one for Halloween last year. This year, however, I have agents embedded in the farmers markets scouting out the perfect gourd.

Today at the grocery store, there was a particularly fine pumpkin specimen, of the type most commonly seen in Spain. So I pulled Nora out of her stroller to take a photograph with it. At first she was terrified at being out-of-stroller in the grocery store for the first time, but eventually we sat her down on the checkout conveyor belt and got a photograph with her and the big gourd. 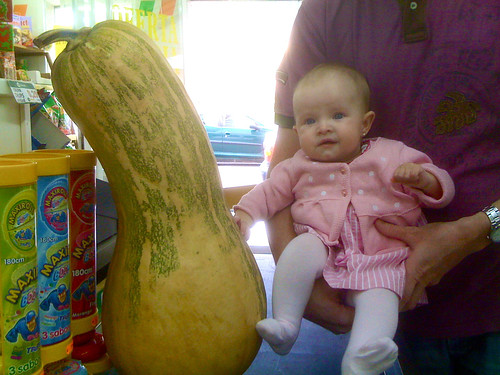 I forgot to ask how much it weighed, but the pumpkin was significantly heavier than Nora.