I am writing to you on behalf of a friend of mine, Andrés, who works at the local grocery store and who helped get you elected by witnessing my absentee ballot when I voted for you. After the recent political scandal involving photos of President Zapatero's daughters with you, he felt such shame and embarrassment that he asked me to write to you on behalf of himself and all Spaniards to apologize and to inform you that all Spaniards are not as rude and disrespectful as Zapatero's daughters...well maybe all the teenagers. While Spain enjoys a similar freedom of the press (I think you can still be fined for publishing material insulting the royal family) as the First Amendment grants Americans, Zapatero has specifically asked all media outlets to refrain from publishing any photographs of his daughters, who are currently 13 and 16. If you can believe it, without any official laws on the books [UPDATE: This is incorrect. There is a law in Spain that protects all minors from having their photos published.], the Spanish media actually respects the wishes of the president and does not publish their images anywhere. I know, what's that about, right? Hence the mild vortex of scandal when the White House released a photo of his daughters (perfectly within your rights, of course) and the Spanish media published it, with his daughters' faces pixelated to protect their identities. Zapatero mistakenly stirred up a kerfuffle about it, thus lending importance to the photo. He has now released a statement saying that he understands why the Spanish media published the photos and has explicitly thanked the media outlets that had the respect to not publish it.

This spawned an obvious response of "Hey, buddy! If you're gonna use our tax euros to fly your girls over to meet the most famous person in the world (that's you, sir), and they publish an official picture of the encounter, you'd better believe we're gonna publish the photos!

It just goes to show that just because you can lead a country, run a government, and command an army, doesn't mean you can get your teenage daughters to dress in a way that they don't look like blood-sucking vampires. You and Michelle should keep that in mind.

So anyway, on behalf of Spain and Andrés, "Sorry about that!" 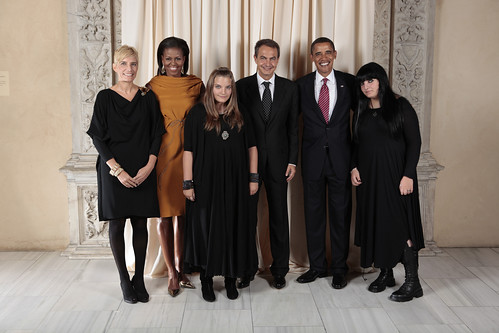