A little while ago, I had an idea for a cool photography project to visualize Nora's growth, one that hopefully won't involve peeing on electronics. My idea is to take a photo of Nora at six months old on one side of our sofa, and then take another picture of her at one year with her slightly to the right of her previous position. Ditto for 18 months and 2 years. Then, I can photoshop them all together to have four versions of Nora sitting together on the sofa! Cool, huh? I immediately recognized that the difficulty is going to be in camera positioning. With any long-period timelapse, you absolutely must have a strategy (like a fence post) for getting the camera in the same position after an extended period of time has passed. The best idea I could come up with was something like a loop of string around the sofa legs and tripod legs, but I don't really like that idea.

In preparation for the six-month-old photo, I've done some tests to see how feasible this project will be even if I'm unable to perfectly line up the camera every six months. The results aren't bad at all. I think we're a go for this project.

This one was done without moving the tripod at all. The lighting and stitches are perfect. Worth viewing large. 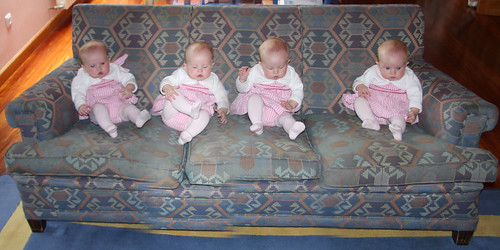 This one was done handheld yesterday with a slightly less interested Nora. I just tried to generally frame the couch, sometimes standing a meter away from where I took the previous shot. Its imperfections are pretty obvious, but the overall effect still works well.

Here are the fathers of these four girls, of course.